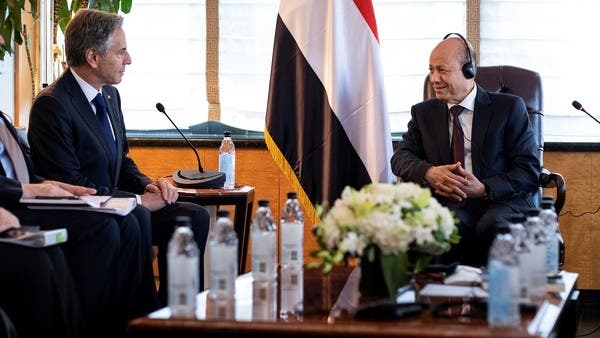 “They expressed their hope that the Houthis will also support such important steps to bring relief to Yemenis,” the State Department said.
The top US diplomat and Yemen’s president discussed on Monday the need for extending the UN-mediated truce inside the war-torn country, with both calling on the Iran-backed Houthis to help ease the humanitarian crisis.

Secretary of State Antony Blinken met with Yemeni Presidential Leadership Council (PLC) President Rashad al-Alimi in New York during one of his first meetings on the sidelines of the UN General Assembly.

Blinken affirmed strong US support for the PLC and al-Alimi’s leadership, the State Department said after the meeting.

A UN-mediated ceasefire started in April for 60 days and was renewed twice for the same period. The current truce is set to expire on October 2, and the Houthis have refused to support a six-month deal.

“Secretary Blinken and President al-Alimi discussed the urgency of extending and expanding the UN-mediated truce by October 2,” the State Department said.

Blinken praised the Yemeni government’s leadership on the truce.

Both officials voiced their support for more steps under the truce, which include opening roads in Taiz and other areas, expanding commercial flights from Sana’a airport, and ensuring salary payments to tens of thousands of teachers, nurses, and other civil servants.

“They expressed their hope that the Houthis will also support such important steps to bring relief to Yemenis,” the State Department said.

Washington has long said that the truce was the best way forward and the only way to reach a permanent ceasefire.