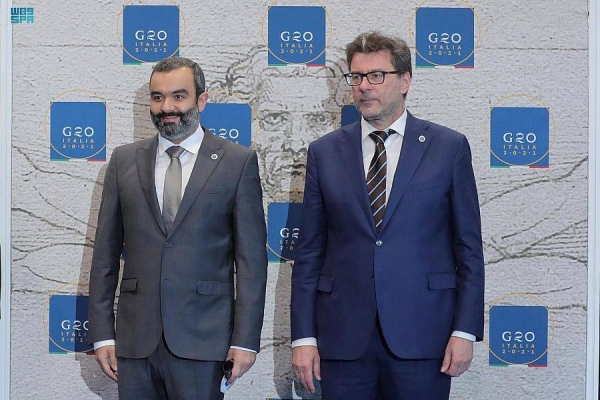 Organizations working in the field of innovation must have sufficient flexibility and speed to stimulate creativity and keep pace with the rapid change being driven by digital transformation, said Saudi Arabia Minister of Communications and Information Technology Eng. Abdullah Al-Sawaha.
He added that bridging the digital divide globally will usher in prosperity in societies, citing the Kingdom's topping the list of leading countries in this field.Al-Sawaha made the remarks during his participation in the G20 digital economy ministers’ meeting in the Italian city of Trieste on Thursday.

In an opening speech, the Saudi Communications minister highlighted how the Kingdom’s Vision 2030 has contributed to making the Kingdom an effective leader at the international level in protecting the planet through qualitative global efforts, such as Saudi Green and Middle East Green initiatives launched recently by Crown Prince Muhammad Bin Salman, in addition to investing in new industries and markets that are environmentally friendly.

He pointed out that NEOM City is the largest global platform for innovators and creators, and is a vivid example of harmonizing regulation and innovation, to achieve well-being for societies, and preserve the environment through the adaptation of technology and innovation.

On the digital policies and regulations in the Kingdom, Al-Sawaha cited the Kingdom's ability of sufficient flexibility and speed as the biggest evidence to transform digital payments within a few hours.

He expressed pride in the digital entrepreneurship in the Kingdom, which represents the ideal model on the ability of young men and girls to contribute to supporting the economy and building an innovative future, considering innovative solutions in digital health, online education, digital payments and digital government.

The Saudi minister also expressed his confidence that the forthcoming summit, under the Italian presidency, would make a significant contribution that would have a profound impact on human empowerment, preserving the planet and shaping new horizons, ensuring prosperity and sustainable development.

He highlighted the pioneering efforts being made by the Kingdom during its G20 presidency last year and stressed that the Italian presidency maintained the same orientation by focusing on the digital economy and innovation.
Add Comment