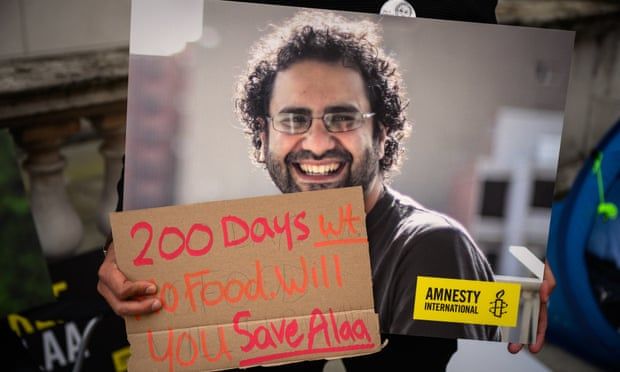 Alaa Abd El-Fattah has been on hunger strike for six months and will refuse water from 6 November, the first day of the climate summit
The majority of living Nobel prize for literature laureates have called on world leaders attending the Cop27 climate conference in Egypt this week to help free thousands of political prisoners in the country, including the writer Alaa Abd El-Fattah who is six months into a hunger strike and “at risk of death”.

The 15 laureates called on the world leaders to “speak the names of the imprisoned, to call for their freedom, and to invite Egypt to turn a page and become a true partner in a different future: a future that respects human life and dignity.”

They cited the case of Abd El-Fattah, who has been imprisoned for most of the last decade and is one of Egypt’s most high-profile political prisoners. The British-Egyptian writer has been on hunger strike since April and has said he will stop drinking water on 6 November, the first day of Cop27.

“Alaa has spent the last 10 years – a quarter of his life – in prison, for words he has written,” the letter reads. “As Nobel laureates, we believe in the world-changing power of words – and the need to defend them if we are to build a more sustainable, genuinely fairer future.

“We urge you to use the opportunity that is now in your hands to help those most vulnerable, not just to the rising seas, but those imprisoned and forgotten – specifically in the very country that has the privilege of hosting you.”

While acknowledging the urgency of the environmental negotiations, the laureates wrote, “let us not use the excuse of pragmatism to avoid the hard questions”.

Egypt’s president Abdel Fatah al-Sisi has relentlessly cracked down on dissent through arrests and persecution for years, with many activists involved in the 2011 uprising having fled the country or been imprisoned.

Human Rights Watch estimates there are more than 60,000 political prisoners behind bars in Egypt.

Amnesty called Abd El-Fattah’s last trial “grossly unfair”, stating that “prison and security officials have subjected him to a catalogue of human rights violations including torture and other ill-treatment, in reprisal for his prominent role in the 2011 revolution”.

Abd El-Fattah’s sisters Mona and Sanaa Seif have been staging a sit-in outside the UK’s Foreign Office in London. “By sitting on their doorstep they won’t be able to shrug me off any longer,” Sanaa told the Guardian last month. “When the British government goes to Egypt next month for Cop, they must return with my brother.”