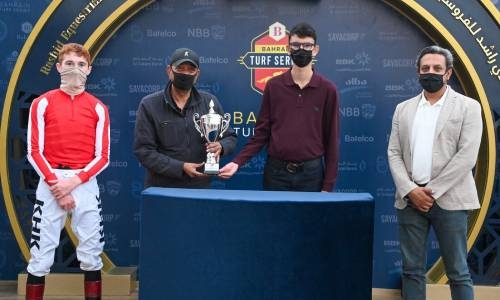 Buffer Zone lifted the Nass Corporation BSC Cup for owners Victorious yesterday in the eighth and feature race at Rashid Equestrian and Horseracing Club (REHC) in Sakhir.
Trained by Hesham Al Haddad and saddled by David Egan, Buffer Zone won the six-furlong race with a BD4,000 prize ahead of runner-up What A Business representing Jawad Abdulwahid Ahmed, Jaffar Radhi and Hussain Makki.

In third was Roman River for M and E Racing, AM Smith and Edinson Rodriguez. In attendance at yesterday’s races were REHC High Committee chairman His Highness Shaikh Isa bin Salman bin Hamad Al Khalifa and other high-ranking officials.

Meanwhile, two Late Mr Abdulla Ahmed Nass Cups were up for grabs yesterday. Arctic Vega won in the seventh race, sponsored by Nass the Group, held over 11 furlongs with a BD2,500 prize. The winner is owned by Al Mohamediya Racing and trained by Hesham Al Haddad, and was ridden by Neil Callan.

Gateway for Mustafa Jaffar Ali Omran, Osama Hashim and Cameron Nobile was second, and Wait Forever was third for Al Hassanain Racing, Ali Jan and Ebrahim Nader. The other cup, sponsored by Sarens Nass Middle East, was in the first race (Waho) and it was won by Al Saqlawy 1772, competing for Al Riffa, Yousif Alboainain and Abdulla Faisal.

It was held over seven furlongs with a BD2,000 prize. Kuheilan Afas 1675 was the runner-up for Al Wasmiya, Abdulla Kuwaiti and Phil Dennis, while in third was Al Hamdany 1746 was Al Riffa, Yousif Alboainain and Ebrahim Nader.

In the day’s sixth race covering a distance of nine furlongs with a BD2,000 prize, Bond’s Boy won the Blue Dawn (Dodson and Horrell) Cup competing for Al Mohamediya Racing, trained by Osama Hashim and was saddled by Paddy Mathers.