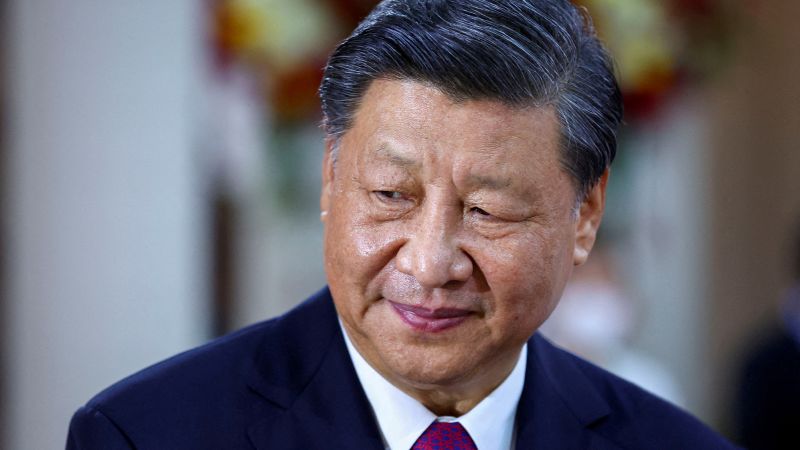 Chinese President Xi Jinping is set to arrive in Saudi Arabia on Thursday for a state visit amid tensions between the US and the two nations, according to a source with knowledge of the trip, an Arab diplomatic source and two senior Arab officials.
Xi’s trip to Riyadh will include a China-Arab summit and a China-GCC conference, according to the four sources.

At least 14 Arab heads of state are expected to attend the China-Arab summit, according to the Arab diplomatic source who described the trip as a “milestone” for Arab-Chinese relations.

The sources spoke on the condition of anonymity because they were not authorized to speak to the media.

Rumors of a Chinese presidential visit to the US’ largest Middle East ally have been circulating for months, but are yet to be confirmed by the governments of Saudi Arabia and China.

Beijing has not made an official announcement that Xi will visit Saudi Arabia.

Last week, the Saudi government sent out registration forms for reporters to cover the summit, without confirming the exact dates.

Reports of the long-awaited visit come against the backdrop of a number of disagreements harbored by the US toward both Beijing and Riyadh, which to Washington’s dismay have only solidified ties in recent years.

The US and Saudi Arabia are still embroiled in a heated spat over oil production, which in October culminated in strong rhetoric and traded accusations when the Saudi-led oil cartel OPEC+ slashed output by two million barrels per day in an effort to “stabilize” prices. The decision was taken despite heavy US campaigning against it.

A strong US ally for eight long decades, Saudi Arabia has become bitter over what it perceives to be waning US security presence in the region, especially amid growing threats from Iran and its armed Yemeni proxies.

An economic mammoth in the east, China has been at odds with the US over Taiwan, which US President Joe Biden has repeatedly vowed to protect should China attack. The thorny topic has gravely aggravated a precarious relationship between Washington and Beijing, who are already competing for influence in the volatile Middle East.

As American allies in the Arab Gulf accuse Washington of falling behind on its security guarantees in the region, China has been cementing its ties with Gulf monarchies, as well as with US enemies Iran and Russia.

Both China and Saudi Arabia have also taken different stances to the West with regards to the Ukraine war. Both have refrained from endorsing sanctions on Russia, and Riyadh has repeatedly maintained that Moscow is a key energy-producing partner that must be consulted on OPEC+ decisions. Following last month’s massive oil cut, some US officials have accused Saudi Arabia of siding with Russia and aiding President Vladimir Putin with his war on Ukraine.

Saudi officials have denied either weaponizing oil or siding with Russia.

Biden said in October that the US has to “rethink” its relationship with Saudi Arabia, which the President had seemingly tried to repair in a July visit to Riyadh.

However, the ultimately frigid visit did not yield any increases in oil output and only aggravated tensions.

In the end of the day, USA cannot fight with everybody, all the time. And especially not with important nations such as Saudi Arabia and China. USA and Europe relationship are among 2 consumers. But with China and Saudi Arabia they have symbiotic relationship of Supplier and consumer.
#Joe Biden
Add Comment