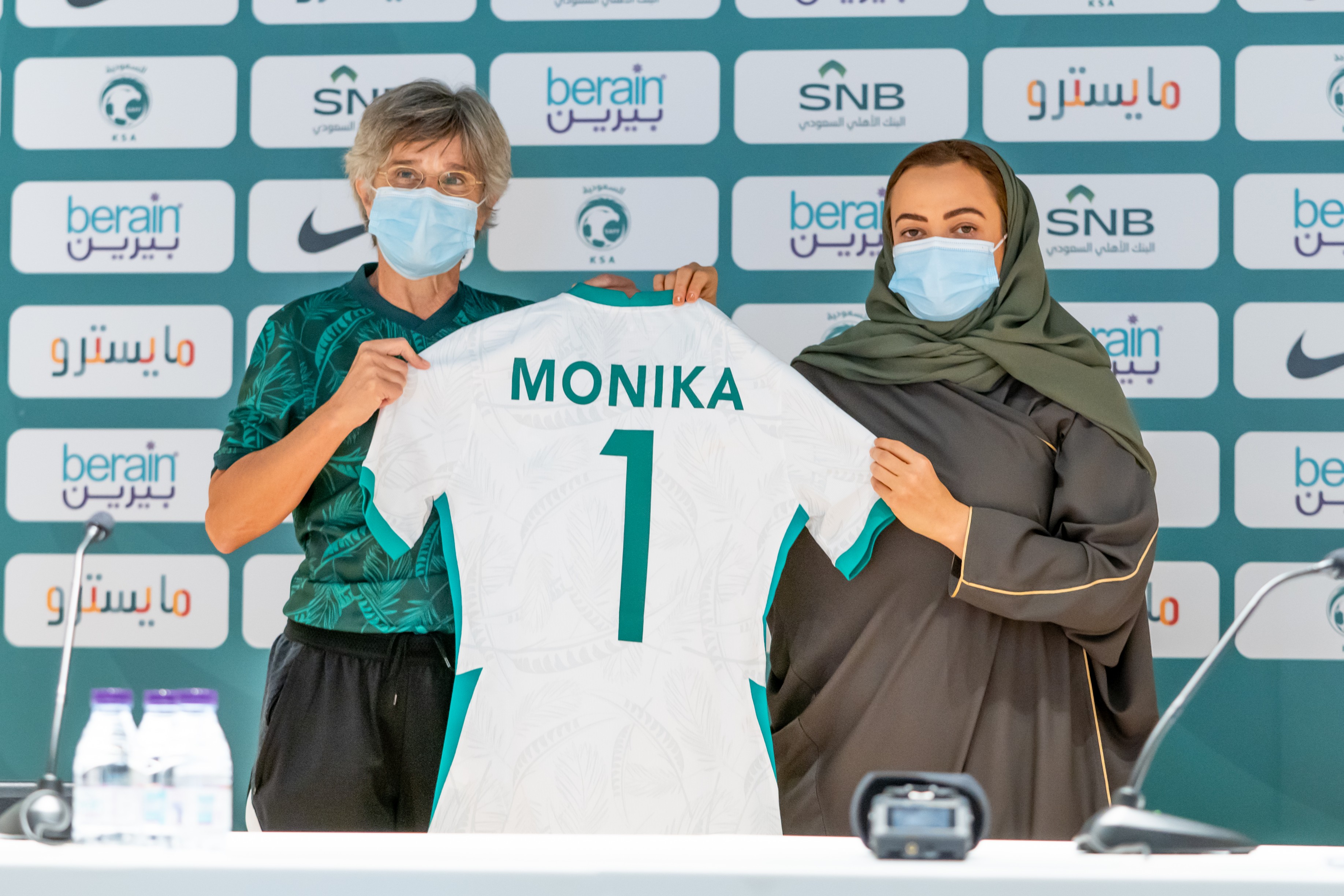 The Saudi Arabian Football Federation has officially welcomed its first-ever women’s national team head coach, Monika Staab, to her new role in Riyadh.
The highly experienced German was appointed in August and held her first training session with the national team this month. Considered a pioneer in the global development of the women’s game, she arrives in the Kingdom with a wealth of international experience as a player, as a manager at national and club levels, and in top-level executive boardroom positions.

Expressing her delight at being part of Saudi football history, Staab said: “It might not be obvious to those who have not visited the country but this has to be one of the most exciting opportunities anywhere in sport and I feel privileged to lead Saudi Arabia’s first women’s national team.”

Staab’s first experience of women’s football in Saudi Arabia was in December 2020 after she was invited to the Kingdom to lead a C-license coaching course for women. During her visit she met officials from the Ministry of Sport, the SAFF, and the Mahd Sports Academy in Riyadh. She said she discovered a passion for football in the country and great ambitions for the development of the women’s game.

Since her appointment, Staab — former coach of FFC Frankfurt (now known as Eintracht Frankfurt), and the Bahrain and Qatar national women’s teams — has been taking a close look at all aspects of Saudi football. As part of this she visited the futsal national team and community-based women’s clubs, met licensed Saudi female coaches, supervised the technical aspects of the Riyadh regional training center for youth and met the head coach of the Saudi men’s national team, Herve Renard.

“The country adores football: young and old, boys and girls,” Staab said. “It unites the country. And since l first visited the Kingdom I could sense a genuine passion for the game. There is an energy of hope, optimism and excitement and that is very refreshing, personally.

“Plus, there is also talent. In a country of 35 million, with two thirds under (the age of) 35, the opportunity is massive to find, nurture and develop young players. And there is a long-term strategy in place.

“So, we have all the ingredients. We’re not suddenly trying to sell football. We don’t need to; it lives within the hearts of the people, it is their national game. But now there’s a clear plan in place and a chance to unlock this huge potential and do something truly transformational.

“I am honestly very excited and proud to be playing a small part in the journey of one of the world’s fastest-growing sports countries.”

Lamia Bahaian, a SAFF board member and head of its women’s football department, said: “We are on a very exciting journey of development and are committed to investing in all areas of women’s football to give it the platform it truly deserves.

“We all believe that football is for everyone in the Kingdom. Thanks to the support of our esteemed leadership, and extensive investment in women’s sports as part of the transformative Vision 2030, we now have all the foundations laid for an exciting future ahead.

“Our passionate female team at the women’s football department have limitless ambitions to create history together.”
Add Comment