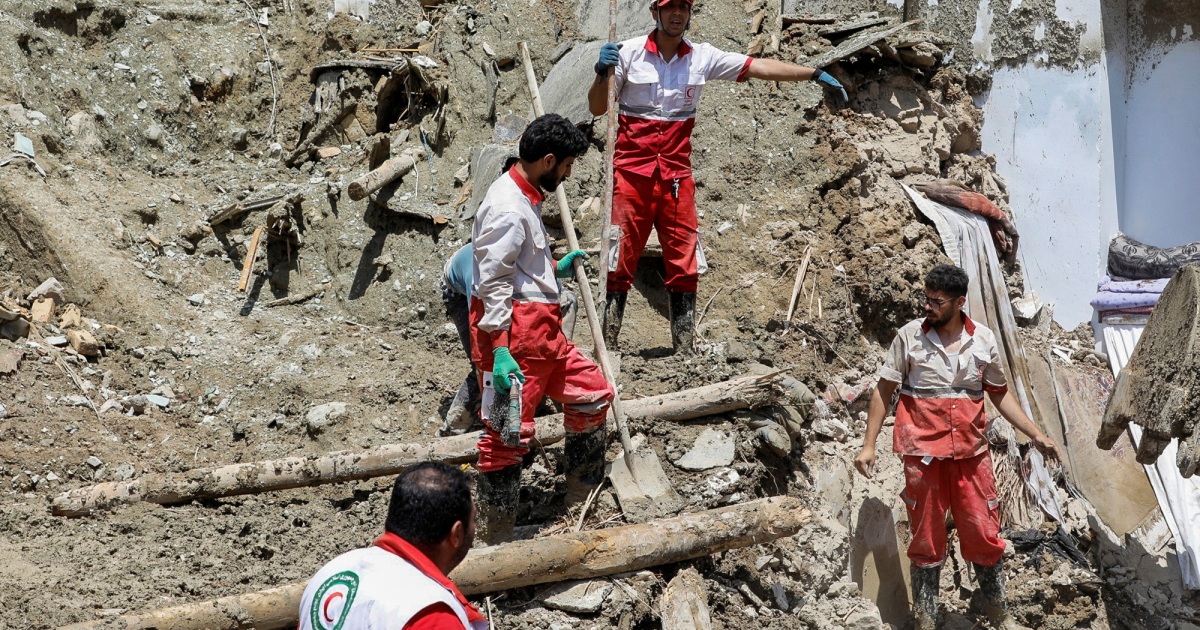 Days of deadly floods and landslides wreak havoc in Iran

Dozens are dead and at least 45 people missing after most Iranian provinces were affected by the inundations.

More than a week of floods and landslides across Iran have left dozens dead while search operations are under way to find many more missing.

At least 69 people have died in flooding across the country since the beginning of the current Iranian month of Mordad on July 23, Nejad Jahani, a deputy with the country’s Crisis Management Organisation, said on Sunday.

Another 22 people, all tourists sitting along or within dried-up rivers, died after being caught unawares in the town of Estahban in the southern province of Fars just before the month started.

Jahani told the state-run IRNA news website that 24 of Iran’s 31 provinces are dealing with floods that have left 45 people missing and damaged 20,000 homes. He added that six Iraqi citizens were among the deceased.

A video purportedly recorded near the holy city of Mashhad – where Iraqi pilgrims regularly visit – circulated on social media on Saturday and showed a van being carried along by the muddy currents.

Other videos posted online showed harrowing scenes of homes and streets being engulfed in mud and cars being destroyed due to the strong currents.

The flooding and landslides have been most deadly in the province of Tehran, where only in the area of Imamzadeh Davoud in the foothills of the Alborz mountains, 19 people were killed and five are still missing.

The province of Mazandaran to the north and the central province of Yazd have also been hit hard, with local authorities reporting considerable damage to some of the historical parts of the city of Yazd, forcing the government offices to close on Sunday.

The ancient city of Yazd is a United Nations Educational, Scientific and Cultural Organization (UNESCO) heritage site, with brick-mud houses and narrow alleyways that increase its vulnerability to floods.

The monsoon rains have incurred more than 60 trillion rials (about $200m) in damages so far in the agriculture sector, according to agriculture minister Javad Sadatinejad.

Tens of thousands of animals and livestock have also perished in the floods, according to officials.

In the capital Tehran, two water purification facilities were taken offline, but officials said the disruption did not affect water distribution in the metropolis and the facilities were restored by the end of Saturday.

Authorities have warned of more rains in the southern and northern provinces, cautioning citizens to refrain from gathering along river banks and other potentially dangerous places.

One upside of the downpours has been that dams and reservoirs across the country, especially in dry provinces such as Fars, Kerman and Sistan and Balochistan, have seen an increase in their stored water levels.

This is while Iran has in recent years been battling droughts that have been unprecedented in decades. It has also experienced floods, a product of extreme weather events that scientists have warned are amplified by climate change.