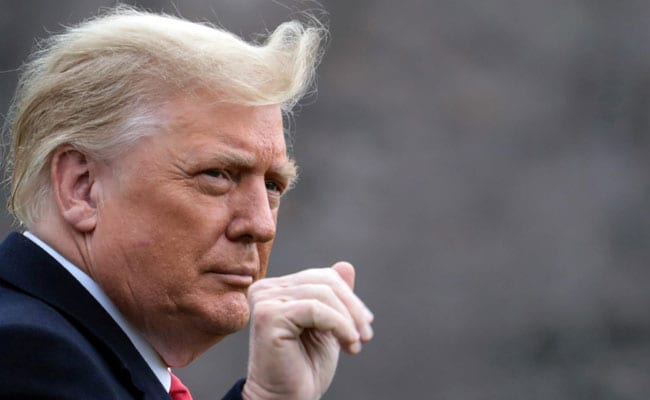 Donald Trump said pullout would have been "a much different and much more successful withdrawal" if he were still president.
Former president Donald Trump blasted his successor Joe Biden on Thursday for putting no conditions on the US withdrawal from Afghanistan and said that a violent Taliban surge in the war-torn country was "not acceptable."

Trump said the US pullout, which Biden has set for August 31 and which is already all but complete, would have been "a much different and much more successful withdrawal" if he were still president.

It was under Trump that the US brokered a deal with the Taliban in Doha in 2020 that would have seen the US withdraw all its troops by May 2021 in exchange for various security guarantees from the militants.

When Biden took power earlier this year, he pushed back the deadline for the withdrawal and set no conditions for it.

"If I were now president, the world would find that our withdrawal from Afghanistan would be a conditions-based withdrawal," Trump claimed in a statement.

"I personally had discussions with top Taliban leaders whereby they understood what they are doing now would not have been acceptable," he said.

"It would have been a much different and much more successful withdrawal, and the Taliban understood that better than anyone," he said.

Trump, who despite his election loss remains the biggest single force in the opposition Republican party, did not provide any details of what he would have done to halt the advances of the insurgents.

Authorities in Kabul have now effectively lost most of northern and western Afghanistan and are left holding a scattered archipelago of contested cities also dangerously at risk.

Some US officials fear the Taliban could take over Kabul within three months of the August 31 deadline.

The United States signed the agreement with the Taliban in Doha on February 29, 2020, committing to a pullout of US and NATO troops by May 1, 2021 in exchange for security guarantees.

They included a promise by the militants to hold peace talks with the government in Kabul, to not attack the US or its interests, and to not support groups like Al-Qaeda in attacking the United States.

In the wake of the agreement the Trump administration sharply cut the number of US forces inside Afghanistan and remained committed to the May 1 deadline, even as the Taliban accelerated its offensive against government security forces following the Doha deal.

Trump's troop reductions continued after he lost the November election to leave the number at 2,500, along with some 16,000 civilian contractors, still in Afghanistan when Biden took office on January 20.

Biden paused further withdrawal for a review of policy, and in April announced that the pullout would go ahead, pushing the deadline back initially to September 11, 2021, before moving it up again to August 31.
#donald trump  #joe biden  #afghanistan
Add Comment