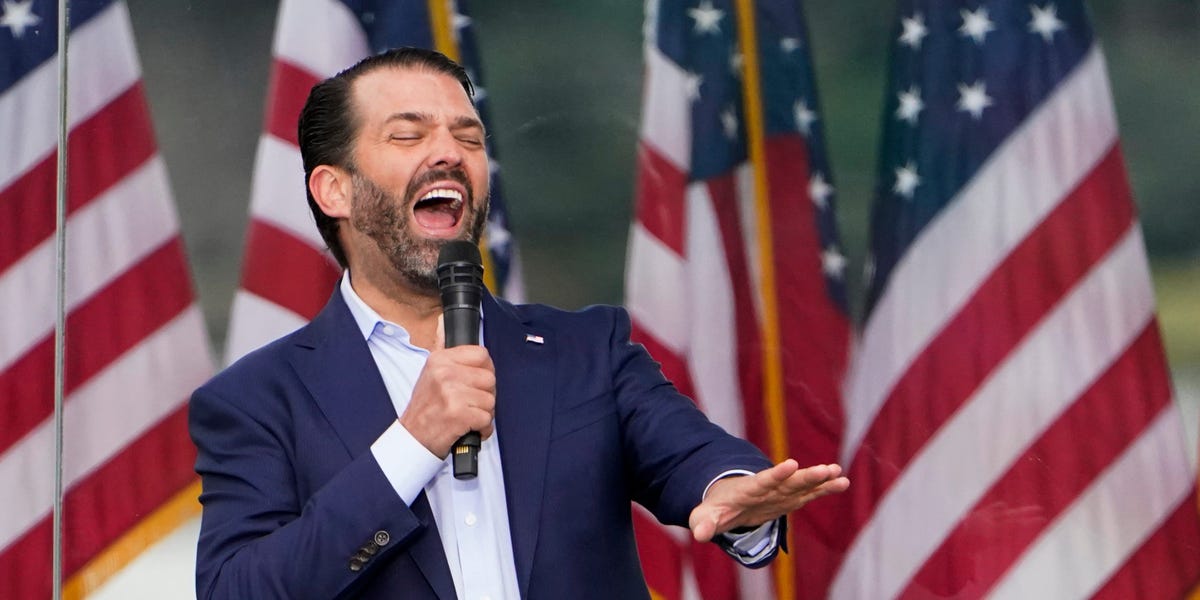 Donald Trump Jr. shared a mocking video that showed Biden falling after getting struck in the head by the former president's golf ball

Biden, 78, stumbled three times and fell once as he ascended the steps to board Air Force One on Friday.

The video showed former President Donald Trump taking a shot on the golf course — one of his favorite pastimes. The golf ball Trump hit flew into the greenery and came back in another frame, striking Biden in the head and knocking him down on the steps of Air Force One.

"It wasn't the wind folks," Trump Jr. wrote on Twitter.

Biden slipped twice as he climbed up the steps Friday. The third time, he stumbled and fell down.

At the top of the steps, Biden, 78, looked back and waved before boarding the plane.

Biden's age and history of foot injuries led to reporters asking questions about his health after the three stumbles.

"It's pretty windy outside," White House Deputy Press Secretary Karine Jean-Pierre said. "It's very windy. I almost fell coming up the steps myself. He is doing 100% fine."

"Does every member of the trump family have the intellect of an angry kindergartener?" one user wrote in response to his post. Another user said they reported the tweet and cited it as "disrespectful."

Trump Jr.'s tweet did not violate Twitter policies, according to The Hill, which cited a spokesperson from the social media platform.

Weeks after winning the 2020 presidential election, Biden fractured his foot while playing with his dog Major.

Kevin O'Connor, Biden's doctor, said in a statement that a scan "confirmed hairline (small) fractures of President-elect Biden's lateral and intermediate cuneiform bones, which are in the mid-foot."

At the time, O'Connor said that "it is anticipated that he will likely require a walking boot for several weeks."

Biden, 78, is the country's oldest president. During his campaign against Trump, Biden vehemently denied having any issues with his health. He and his campaign dismissed all health concerns, as well as released a medical report last year from Biden's doctor. The report said Biden is "healthy" and "vigorous."

Oh ya 48 days ago
Cameltoes forgot to tell slow joe to spit out his gum as we know he can not chew and walk at the same time.
View all comments (1)Add comment