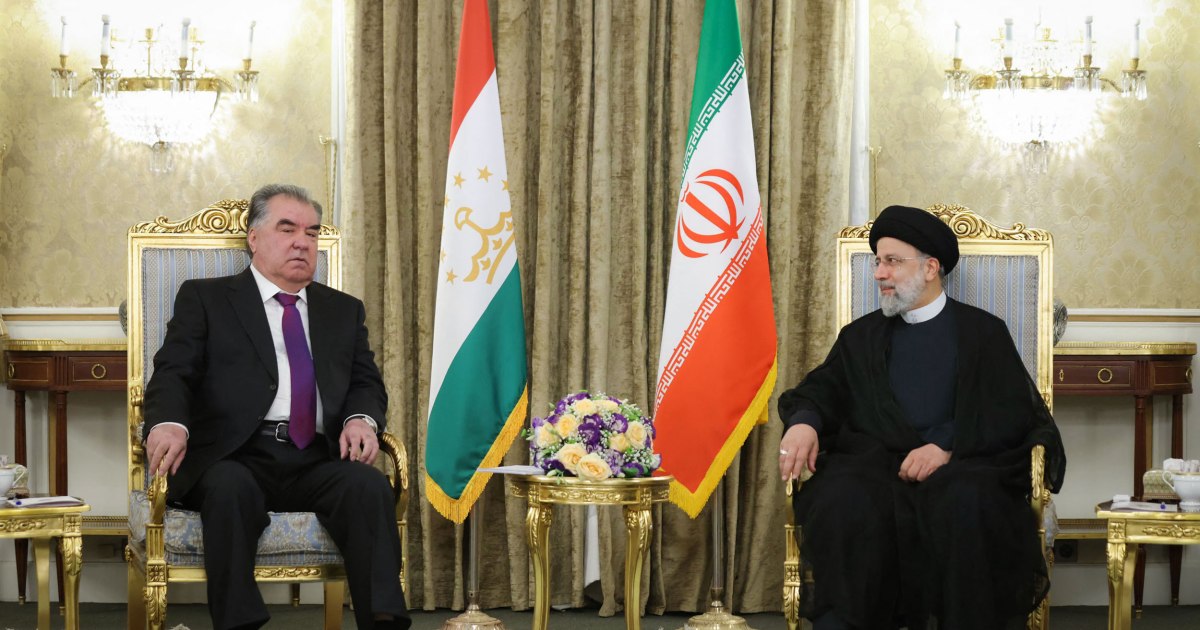 Iran and Tajikistan are strengthening ties as they look warily at Afghanistan.

Iran has long been an influential power in its surrounding region, with a focus on the Arab states to its west, and support for allied governments and non-state actors in them.

However, a visit by the President of Tajikistan, Emomali Rahmon, to Tehran on May 30 and the opening of a new Iranian drone factory in the Tajik capital Dushanbe two weeks earlier, are evidence of Iran’s “look to the East” foreign policy orientation, as the country pursues greater engagement with non-Western countries.

The new factory in Tajikistan will manufacture the Ababil-2 drone, which Iran says has a range of 200km (124 miles).

The factory is the first such facility that Iran has built in a foreign country, and highlights Tehran’s ability to “export military equipment to allied and friendly countries to help increase security and sustainable peace”, General Mohammad Hossein Bagheri, the Iranian armed forces’ chief of staff, said at the inauguration on May 17.

Iran’s drones have been a source of influence in Arab countries, such as Lebanon and Yemen, and have been critical to Tehran’s efforts to strengthen its position and those of its regional allies and surrogates, while heightening the concerns of the United States, Israel, and some Gulf Cooperation Council (GCC) countries.

Tajikistan, however, lies not in the Middle East, but in Central Asia. Yet, since Tajikistan’s 1991 independence, Iran has had mostly good ties with Dushanbe.

Similar languages, and strong cultural bonds, have been critical to Iranian-Tajik relations.

“As the poorest of the former Soviet republics, Tajikistan was happy to gain new international partners to help reduce its dependence on Russia, while for Iran, it provided an opening to central Asia and the reinvigoration of a wider Persian cultural space, which helped combat Western-led efforts at isolating the Islamic Republic,” Edward Wastnidge, who lectures on international studies and politics at the British Open University, told Al Jazeera.

“For example, former [Iranian] President Ahmadinejad sought to establish a ‘Union of Persian Speaking Nations’ among Iran, Afghanistan and Tajikistan, though it was more a declaration of common cultural bonds than anything substantive,” Wastnidge added.

Although relations took a downturn in the mid-2010s, ties once again improved, and have led to bilateral trade more than doubling between 2020 and 2021, to $121m.

In February, Iranian and Tajik officials also pledged to boost annual trade to $500m. As a landlocked nation, Tajikistan sees Iran’s Chabahar and Bandar Abbas ports as critical to its ability to access the Gulf and the Arabian Sea.

The strengthening of ties, in particular defence cooperation, between Iran and Tajikistan comes with both countries concerned about insecurity in Taliban-ruled Afghanistan.

“Both Iran and Tajikistan have mutual security concerns in Afghanistan,” Omid Rahimi, a fellow at the Institute for Central Asia and Afghanistan Studies, told Al Jazeera. “Iran also defines stability and security in Tajikistan and Central Asia as its strategic interests. The northeast is the only safe area without a direct threat in the peripheral geography of Iran.”

Dushanbe wants to better defend Tajikistan from armed groups and clamp down on illegal border crossings into Tajikistan from Afghanistan and Kyrgyzstan. Shared fears about ISKP, the Central Asian branch of ISIL (ISIS), and other violent groups help explain why Iran is keen to increase security coordination with other states bordering Afghanistan.

Yet Tehran and Dushanbe have taken different approaches to dealing with the Taliban.

“By accepting the current situation, Iran has realistically chosen not to confront the Taliban, but Tajikistan, from an ethnic point of view, has supported the Tajik resistance [in Afghanistan],” explained Rahimi. “Naturally, this concerns Iran and other countries, such as Uzbekistan or even Russia and China. At the same time, it should not be forgotten that Tajikistan also feels strongly threatened by Afghanistan and therefore prefers to keep an important and influential actor like Iran by its side.”

If hostility later breaks out between Iran and the Taliban, Tehran might shift closer to Tajikistan’s position.

But Tehran can be expected to tread cautiously in relation to Afghanistan given Iran’s border security concerns.

“There are officially around four million Afghans currently living in Iran, and the real number is estimated to be much higher than that. Iran sees them as a potential security threat as they can be infiltrated by pro-Taliban or pro-Qaeda sympathisers,” said Eldar Mamedov, a foreign policy adviser in the European Parliament, who spoke to Al Jazeera in a personal capacity.

“For that reason, Iran is very unlikely to move openly against the Taliban – and much less so as the [anti-Taliban] Panjsher resistance is not seen, at this moment, as having the potential to unseat the Taliban.”

GCC members’ influence in Tajikistan is relevant to Tehran-Dushanbe relations.

“Rahmon seeks to manoeuvre between a variety of regional and global players, extracting the maximum benefits for his power. This is driven as much by geopolitics as by expectations of investments,” explained Mamedov. “Currently, Tajikistan’s relations with Iran are on the mend, but Rahmon also courts the [GCC states] assiduously.”

Albeit not to a great extent, the Iranian-Saudi rivalry has affected Dushanbe.

While making inroads in Tajikistan and deepening defence cooperation with the country, Iran wants to counter Saudi influence in Dushanbe, which increased when relations were poor between Iran and Tajikistan.

“Riyadh took full advantage of the rupture and sought to leverage its financial muscle in investing in a number of economic and development projects in Tajikistan. This was pure geopolitical opportunism on the part of Riyadh, seeking to capitalise on the situation with the aim of deprivileging Iran’s position as a key ally and investor in Tajikistan,” added Wastnidge.

Turkish-Iranian competition in the region factors into the equation too.

Turkey has already armed Azerbaijan with Bayraktar drones and has sold them to other central Asian states; Iran likely sees its new factory in Dushanbe as part of an effort to compete with Ankara.

Tajikistan, a non-Turkic country that shares deep cultural and linguistic ties with Iran, is a part of central Asia where Tehran has advantages over Turkey, despite its drones being less advanced than the Bayraktars.

“Tajikistan was also interested in acquiring Turkish drones. However, Rahmon may be looking to diversify his regional ties to include Iran and play Iran and Turkey against each other to his advantage,” explained Mamedov. “That may prove useful as a hedging strategy as Tajikistan is mired in a conflict with Turkic Kyrgyzstan.”