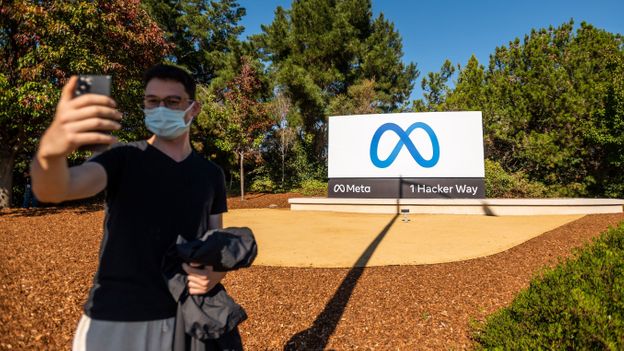 Prefixes rarely make headlines, but with Facebook's rebrand, "meta" became a word for 2021. Nathan Dufour explores its ancient origins to find out what it says about our present.

In the wake of Facebook's recent rebranding, we've been hearing a lot about the word meta.

Freed from its usual role in English as a prefix in words like "metaphor", "metastasise" and "metamorphosis", it now stands alone as a proper noun, the new name of a social media monolith with the self-declared purpose of ushering its users into the "metaverse".

Meta’s metaverse will apparently entail augmented, virtual and mixed reality technologies, to effectuate an immersive online experience – an "embodied internet", where users are not just scrolling, posting and commenting, but interacting in a fully-realised computer-generated world.

Worlds such as this already exist, with games like Minecraft, Roblox and Second Life, which to varying degrees merit the name of "metaverse", depending on whom you ask and how it’s being defined. Indeed, much ink (or rather, many a pixel) has recently been spilled over precisely this question – what is a metaverse? And is it a good thing?

But let's explore these questions by asking a more fundamental, and lexical one (a meta-question, if you will): what does the expression meta mean, and what does it symbolise? And what does that have to do with Facebook's new name and vision?

The term metaverse was coined by Neil Stephenson in his 1992 novel Snow Crash, a speculative epic whose action takes place in two parallel worlds – primary, physical "Reality", and the online, virtual "Metaverse" existing alongside it. Reality is dominated by malevolent mega-corporations who have privatised every sector of human life, and the Metaverse is fraught with danger, intrigue and corruption. 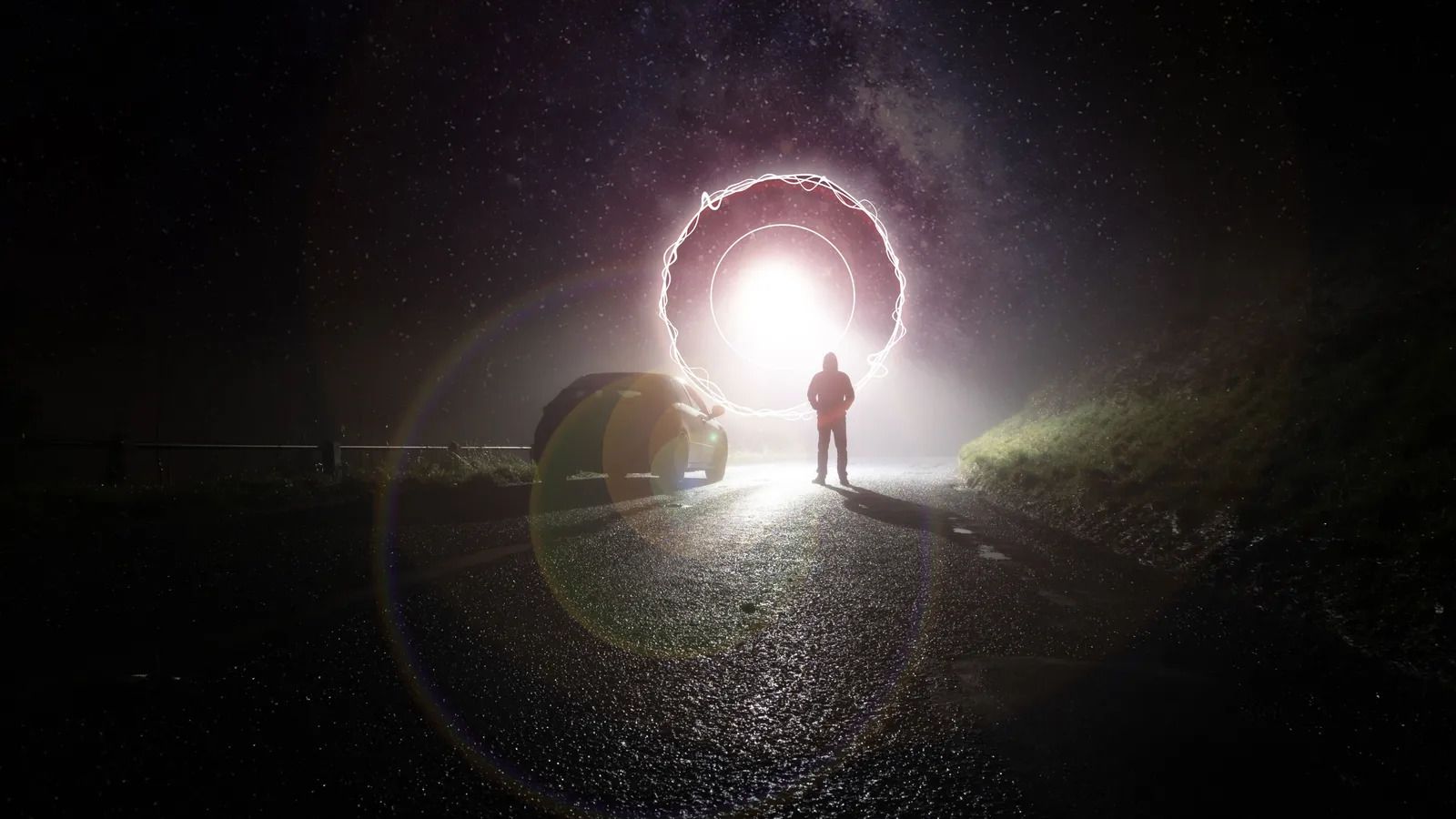 The metaverse supposedly spans the physical and digital worlds

One may wonder whether this consideration factored into Meta’s rebranding process – that the origin of the concept with which they’ve made themselves synonymous is so distinctly tinged with sci-fi ominousness, and the spectre of worldwide corporatocracy.

But the prefix itself, meta-, was originally an innocent preposition. (Meta is not the first company to appropriate a preposition; I can no longer think of the German über without thinking of taking a ride somewhere.)

It derives from the Greek μετά, which encompasses a wide array of meanings, such as "with", "after", "alongside", "on top of" and "beyond". A metaphor, for instance, is literally an act of carrying (phora) something beyond (meta). In general, meta- can also denote a change of place or state, as in metamorphosis.

One can see how these spatially relational meanings pertain to the recently coined "metaverse" – it refers to a reality existing alongside, upon or beyond the confines of the supposedly primary reality that preexists it, a transcendence of what came before.

But this qualitative aspect of "transcendence" – the connotative aura which makes Meta such a ponderous choice of brand name – did not always attach to the word, and in fact may have glommed onto it only by virtue of an historical accident. 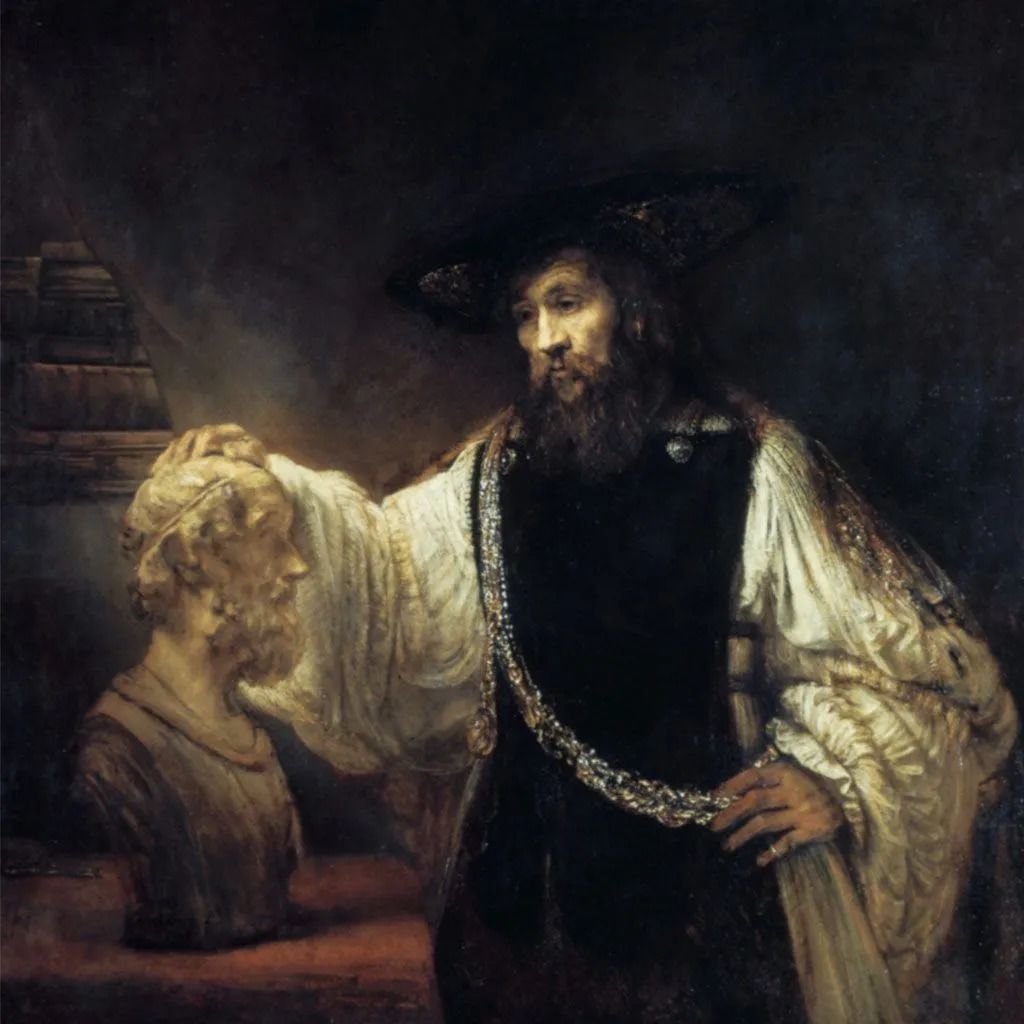 It’s from the Greek philosopher Aristotle that we get the term "metaphysics", the branch of philosophy devoted to the most ultimate categories of existence – things like "substance", "being" or "actuality" – which he examines systematically in the work of that name.

Except, that’s not what Aristotle himself named the work (which may not have been a finished work at all, so much as a hodgepodge of notes and smaller treatises). Rather, the title seems to have arisen simply because in the traditional ordering of his collected works, it was placed after (meta) another work called the Physics.

Hence, the phrase Meta-physica, meant to merely label "the book after the book about nature (the Physica)", came to refer to the whole philosophical department in which one asks the biggest, broadest questions that can possibly be asked.

Because of the exalted status of metaphysics (both the book and concept) among the concerns of later Western philosophy, the prefix meta- came to be associated with transcending, comprehending and encompassing. And by extension from that, it now refers to a conceptual layer of something that is beyond or transcendent of the thing itself, and is hence denotes self-awareness or self-reflection.

This shows up in academic discourse, when it gets tacked on to the front of various terms and concepts – metalanguage, metaethics, and so on – when theorists of a given discipline theorise about the parameters of the discipline or concept itself.

Relatedly, in colloquial English, meta has become an adjective, which essentially means extremely self-aware, self-reflective, or self-referential– as in the phrase, "that’s so meta". Just as every academic takes a secret delight in the arcane jargon of their discipline’s meta-theory, so does each participant in discourse relish the performance of self-awareness that we call meta – everyone wants to be in on the joke.

Memes, for instance, are especially given to meta-reference – their meaning, and their humour, derive from their creators’ and viewers’ shared awareness of the template’s foregoing iterations. It’s not a funny picture in and of itself, but because of all the uses of that same picture before it, and the self-aware extra layer that the latest caption lays on top ofit. In the age of information, meta-reference is the soul of wit.

It has been the triumph of entertainment franchises to notice that meta-reference and meta-narrative can be commodified. For Meta is not the only company expanding into the metaverse – the same is true for companies like Disney, which owns universes like Star Wars, Marvel and others, into which, as metaverses, they will undoubtedly be inviting their audiences not just as spectators but as participants. (Incidentally, New York Comic Con now offers virtual attendance billed as "Metaverse Membership".) 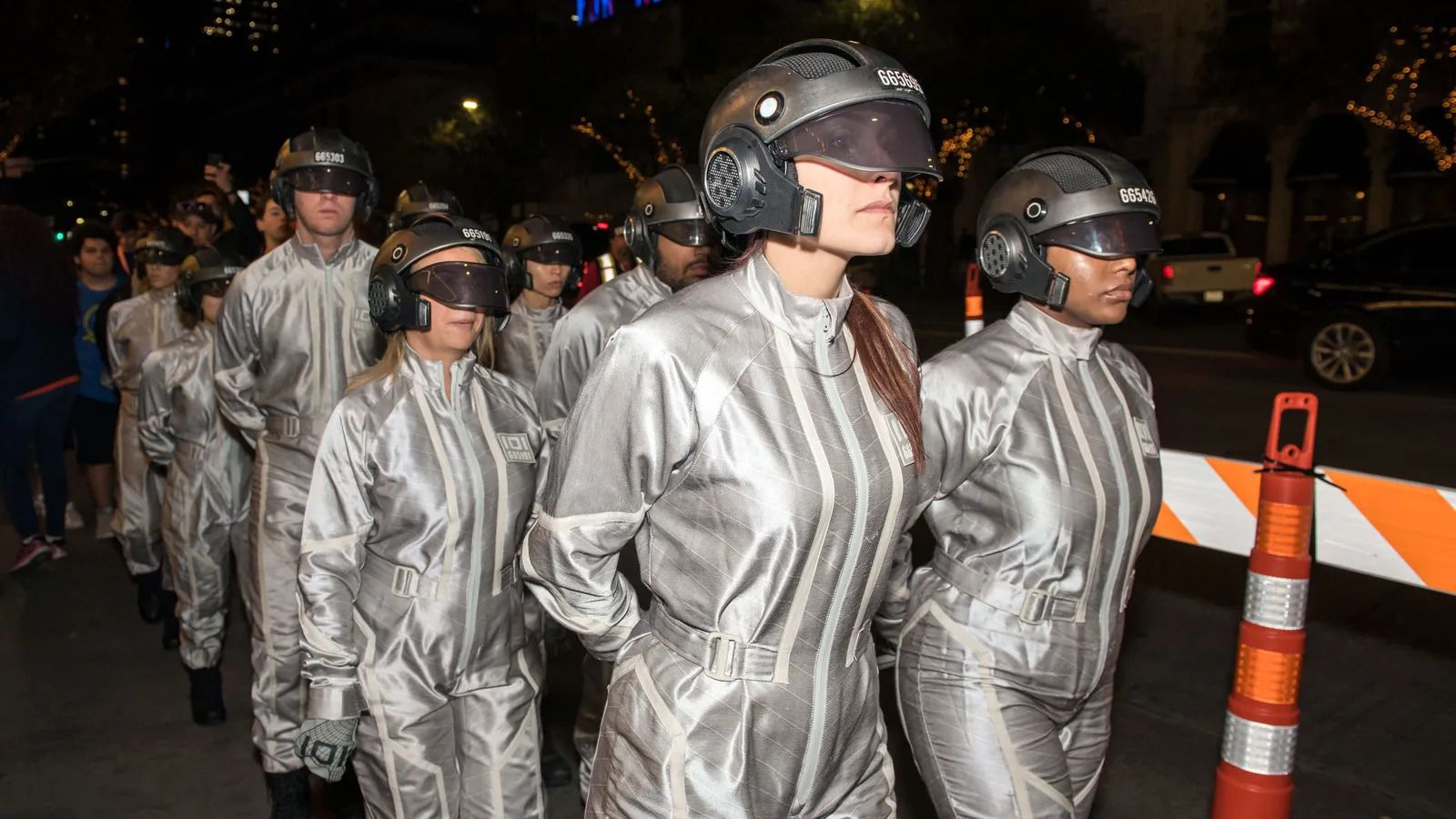 Characters from Ready Player One, at the launch of the movie

This very phenomenon was in fact foretold by another metaverse-themed 2011 novel, Ready Player One, made later into a movie – which returns us to the anxieties implicit there and in Snow Crash. For while the user may participate in the metaverse with apparent freedom, they remain subject to those who control the medium itself – the artists and programmers who create that world, and ultimately the powers behind them. Insofar as the simulators control the simulation, they control those who are simulated.

In a sense, this is not far from what companies like Meta have been doing all along. For in giving us spaces in which to create and promulgate our handles, our pages, our brands, they have been luring us into a kind of simulation – one that is characterised not by unity of experience across users, but fragmentation into the pigeon-holes of experience, the selective streams of information, the personalised and curated narratives, that characterise social media.

Our handles, and the whole apparatus by virtue of which we become @ourselves, rather than being ourselves, represent meta-layers of identity, laid on top of us, and reaching out beyond us. We are beside ourselves.

The opportunity to develop an avatar to represent our (chosen) bodies in virtual space merely makes more literal and vivid a phenomenon that has already been going on – we are already in a metaverse, one in which the storylines run so thick and abundant that unmediated access to the "primary reality" has long since vanished, if indeed it was ever there.

Is the metaverse something that’s meant to work beneficially with our world, and our nature? Or are you asking us to pass beyond this world?

The question for Meta then, and for any other company coaxing us into a manifest metaverse, would be, what sense of the word "meta" do you mean?

Is the metaverse something that’s meant to work beneficially with our world, and our nature? Or are you asking us to pass beyond this world, as though there’s some need to escape what’s already here? Do you mean "with, alongside", or do you mean "beyond"?

This connects to a broader technological (and philosophical) question about whether progress consists in "getting beyond" the square one of primary reality – the "beyond" we chase, urged by the illusion of the inadequacy of the here and now. How do our attitudes to that question inform our relationship with the planet, and our use of the internet?

Viewing meta with an even closer etymological lens, we find that it comes from the Proto-Indo-European root element *me-, the same root that goes into the Old English mið, meaning "with" or "among", which is in turn related to the modern English middle.

This may bring the phenomenology of our virtual experience into even sharper relief. For it seems to be the nature of human experience to be in the middle of things, constantly at the fulcrum point between our physical selves and the possibilities of transcendence that are suggested by our consciousness.

We dwell in the middle space between our inherent limitations and the theoretical limitlessness of our technological extensions. And our technologies – like language, writing, telecommunication and virtual reality – have each in turn constituted a metamorphosis in our collective being.

Poised in this middle space, we must consider what kind of -verse we want the metaverse to be. The word "verse" literally implies a turning (from the Latin vertere, to turn) – and so in a cosmological sense, the Universe is a turning-as-one. It remains to be seen whether our metaverses will be a turning-away from that shared movement, and as such a contortion, or a turning-with, and as such a harmony.

An escape, or a genuine connection? Beyond, or alongside? So much hangs upon the use of a preposition.