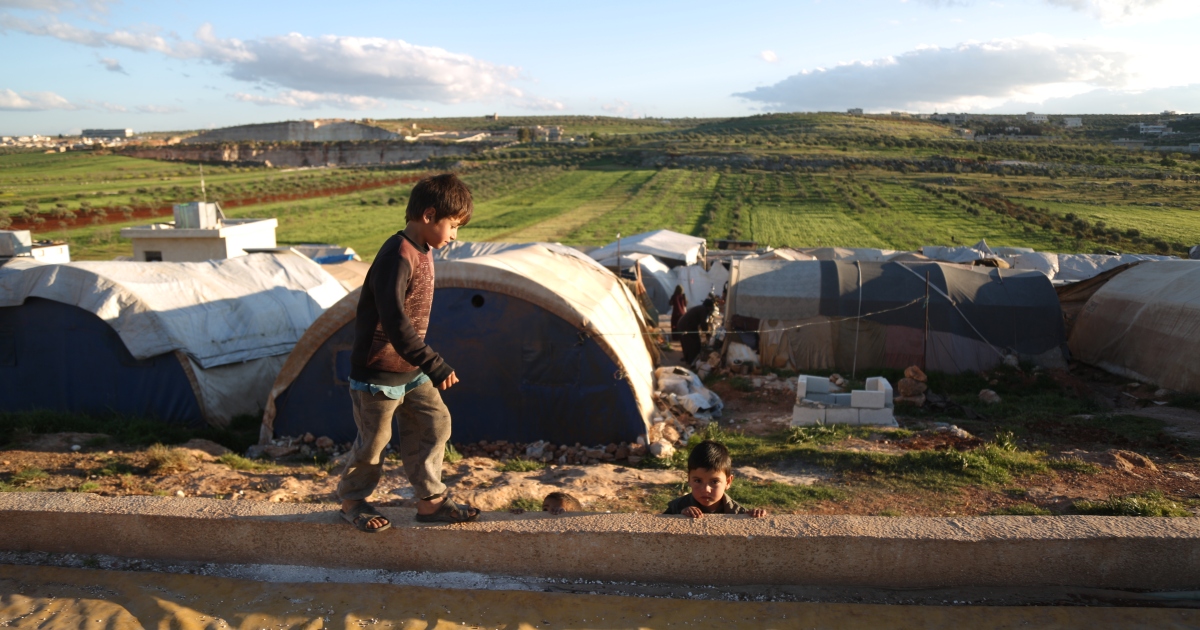 Funding constraints and skyrocketing food prices exacerbated by the war in Ukraine have forced the agency to reduce aid.

The UN agency has been forced to reduce items in its monthly emergency food basket due to funding constraints and skyrocketing food prices, which have been exacerbated by the war in Ukraine and economic crisis in Syria.

“For northwest Syria this means, starting May 2022, the [food] basket will reduce from 1,300 to 1,170 [kilocalories] per person,” a WFP spokesperson, who asked that their name not be used, told Al Jazeera.

A local aid organisation in the northwest also confirmed to Al Jazeera that the WFP had notified them of the food assistance cuts by email on April 8. The organisation asked to remain unnamed as it was not authorised to comment on the status of UN programmes.

The reduction means that needy families will receive the same amount of vegetable oil, wheat flour, salt, and sugar from the UN agency, but monthly quantities of lentils, chickpeas, rice, and bulgur wheat will be cut back. WFP had previously reduced the monthly food basket in September 2021.

Since the onset of the war in Ukraine, the price of vegetable oil has increased in Syria by 39 percent and wheat flour is up by 10 percent.

“If they eventually stop providing food baskets, we will die of starvation with our children,” said 35-year-old Wassel al-Ghajar, a father of four who is expecting his fifth child next month.

“The food basket would help us get by for much of the month,” he told Al Jazeera.

WFP said in February that 12 million people, 55 percent of the total population, are facing acute food insecurity in Syria, and in January the agency dispatched food and nutrition assistance to an estimated 5.5 million people across all its activities in the country.

About 1.35 million people in northwest Syria benefit from the WFP’s food basket programme. 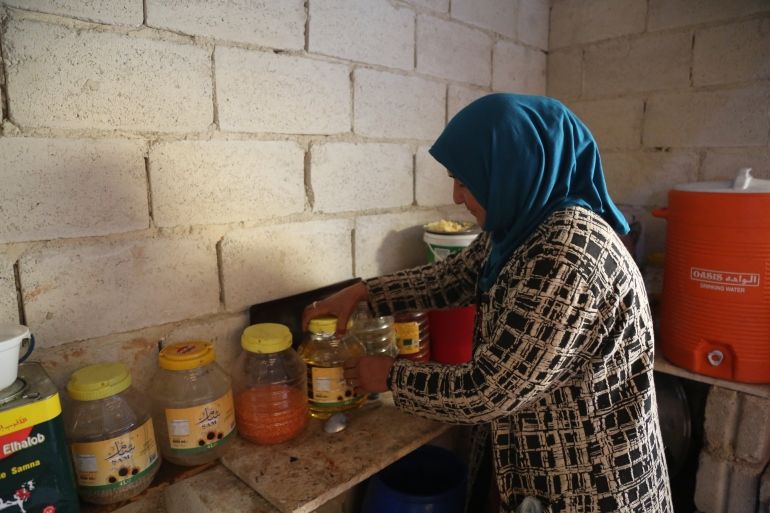 Due to funding constraints and skyrocketing food prices further exacerbated by the war in Ukraine and economic crisis in Syria, the WFP decided to reduce the size of its monthly food basket as of next month

‘May God help us’

Khaled Abdulrahman has a family of nine and the WFP basket of food assistance provided for most of their food needs for half the month.

As his children played near their makeshift home in the Ahl al-Tah camp for internally displaced people in northern Idlib, Abdulrahman considered ways to provide for his family now that their food supply faces cutbacks.

Collecting scrap is probably the only option, he said.

“To make up for the loss, I guess we will have to go to the dump and pick up aluminium and plastic, or lumber wood,” he told Al Jazeera.

An estimated 97 percent of the four million people in northwest Syria live in poverty. More than half are internally displaced. 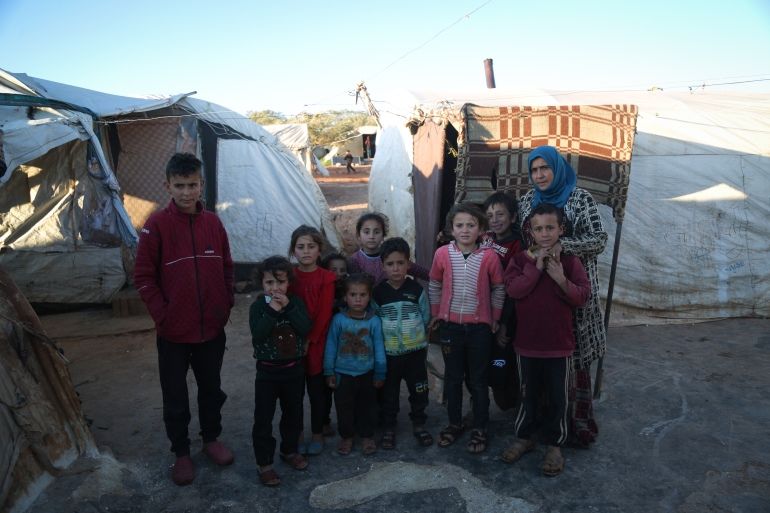 Compounding multiple hardships, even buying food has become a luxury for most in this opposition enclave.

After the Turkish lira was adopted as the currency of use almost two years ago, the economic crisis that shook Ankara last November has spilled over, sparking fuel and food inflation here in Idlib.

The economic effect of the war in Ukraine has exacerbated the situation.

Many families in Idlib are relying on charity meals this Ramadan to feed their families. 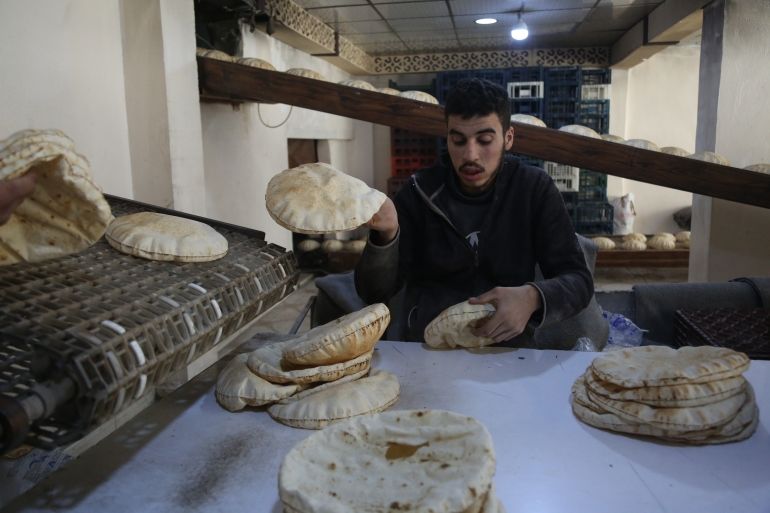 Inside Bilal Alwan’s bakery in Idlib, all appears calm.

But the baker is anxious for his business, and for the families who rely on his bread as costs continue to rise.

The price of bread has doubled, Alwan tells Al Jazeera, explaining that he relies on wheat imported from Turkey, and the price of a tonne of flour has risen from $380 to about $500 since Russia invaded Ukraine in February.

“We don’t have alternatives [to Turkey], and we don’t produce enough wheat locally.” 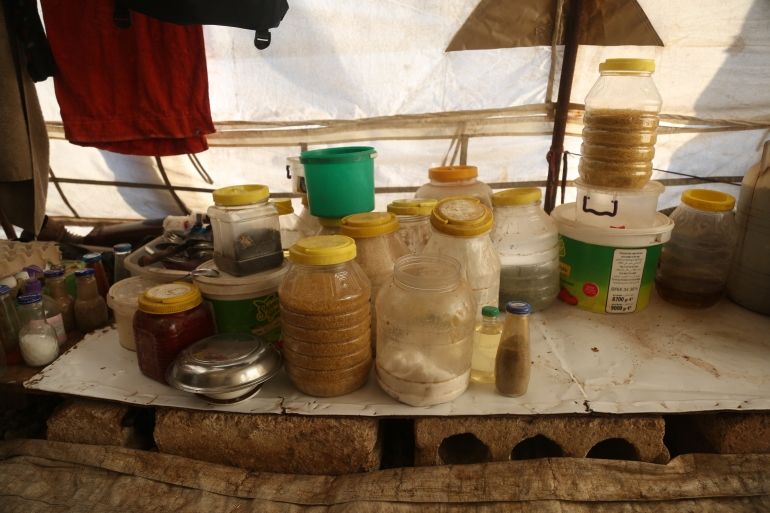 Families are already struggling to cope with the hardships.

The WFP told Al Jazeera that almost two-thirds of families in the northwest have cut down on their food intake. Almost half the children have dropped out of school to start work, and a quarter of residents have relied on early marriage to reduce their family size.

“We won’t be able to afford the food to make up for this loss,” said Fteim Al-Rahmoun, who lives with her children and her son’s family. More than 20 people in this large household had benefitted from the WFP’s monthly food basket.

Nervously weighing the food supplies in her pantry in anticipation of next month’s reduced basket, Fteim Al-Rahmoun said she had very little hope for the future.

“We might as well just die,” she told Al Jazeera.