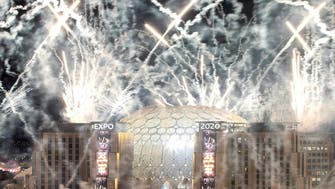 Restaurants, bars, and nightclubs are gearing up for New Year celebrations in Dubai, with residents and tourists set to benefit from celebrity DJs, Australian singing sensation Kylie Minogue and a whole host of other events.

Minogue – the highest-selling female Australian singer of all time – is set to headline a show-stopping concert at Atlantis hotel on The Palm in the final hours of 2022.

The Spinning Around singer will make a welcome return to the resort, after performing at its grand opening party back in 2008. The theme for this year’s gala is A Night with the Stars. In addition to the performance from Minogue, guests will also have front-row seats to one of Dubai’s biggest fireworks displays as the clock strikes midnight.

The Grammy Award winning star will bring an added sprinkling of stardust to proceedings at the Asateer Tent when she will perform at the special Gala Dinner to see in the New Year.

Minogue isn’t the only person to bring some sparkle to New Year celebrations in the country with plenty of events available.

“We are excited to be able to offer an outdoor rooftop venue in ISSEI, our recently opened Peruvian-Japanese fusion concept,” he said.

“The unique flavors, combined with the amazing views across the city of Dubai promise to make for a memorable evening. We also hope that being on the 27th floor will give us the opportunity to view the firework displays at Global Village, Town Square and the EXPO City site.”
Republic Adda Bar & Lounge in downtown Dubai is also gearing up for celebrations and will host a “celebrity DJ,” with “special acts” and dancing.

“We have an incredible view of the Burj Khalifa, which is one of our biggest selling points,” Bhim Gupta, restaurant and bar manager of the party-hub told Al Arabiya English.

The venue is expecting around 130 to 150 people and is expected to be at full capacity at the evening.

Compared to the previous year the party venue has seen a “positive hike” in numbers and has stocked up on an extra 30 percent of food and alcohol to cope with the added demand.

The Premier Inn Ibn Battuta Mall is hosting a festive barbecue-inspired buffet with unlimited free-flow beverages for their New Year’s Eve Bash, with live music and an electric atmosphere until 2:00 a.m.

Other events happening in the emirate include a brunch followed by an after party – set to last until 4:00 a.m. – at Paros in Jumeriah Lake Towers (JLT) with music from DJ Cameo, fire performers, a drummer and dancers.

People looking for something flashier can also watch a show and have dinner at the Dubai Opera, go on a luxury dinner cruise through Dubai Creek, Dubai Marina or the Dubai Water Canal.

For those who feel like celebrating the occasion in a quieter fashion, staying in and opting for food takeaways is an option. Food delivery services are expected to be used more than usual.

Deliverect – a service that helps restaurants manage food deliveries – said it usually sees an increase of about 14 percent in online ordering in the US in the last two weeks of December.

“Overall, there seems to be an increase in the number of online orders placed this year, with a surge happening during the festive season,” Naji Haddad, MENA General Manager at Deliverect told Al Arabiya English. 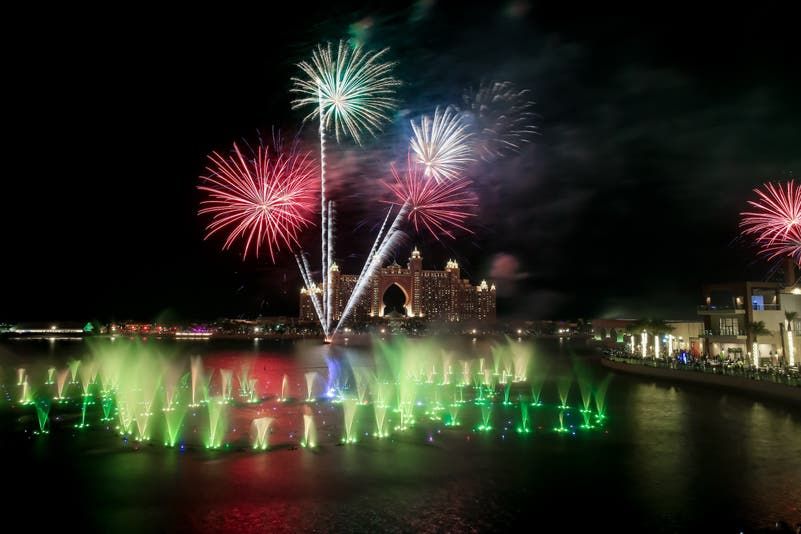 Fireworks at The Pointe in Palm Jumeirah, in Dubai, United Arab Emirates.

Dubai is also famed for its eclectic firework displays to ring in the new year, with a host of pyrotechnic displays, dazzling fireworks and drone shows, to entertain residents ringing in 2023.

Burj Khalifa - the tallest building on the planet – will be at the center of celebrations with onlookers to experience a cutting-edge laser light and fireworks show to illuminate the famed facade, with the Dubai Fountain at the building’s base earmarked to dance in sync with the show.

Residents can also be dazzled by night with the sparkles and glitters of a huge, organized display at The Beach, opposite JBR and Bluewaters, where visitors and residents can await the DSF Drones Light Show.

Global Village on December 31 will mark the New Year aligned with different time zones of the countries that have a presence at the fair.

At The Pointe, visitors will be able to catch the fireworks at Atlantis, the Palm; Palm West Beach and Club Vista Mare, plus be treated to a cool fountain show, live entertainment and plenty of dining options.

Meanwhile, at Festival City Mall, spectators will be wowed by the IMAGINE water and laser show and a glittering five-minute firework show to bring in 2023.