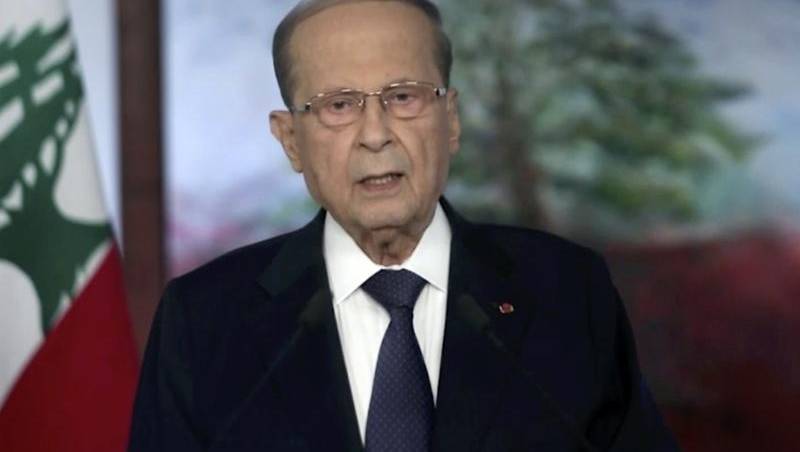 Lebanon's president says he wants good relations with Saudi Arabia, looking to heal a rift with the kingdom after it expelled the country's envoy and banned Lebanese imports in a diplomatic spat that risks adding to Lebanon's economic crisis.
In a tweet, Michel Aoun said Lebanon is keen on having the best relations with the Saudis and on strengthening links via bilateral deals after mounting tensions following critical comments by a Lebanese minister about the Saudi-led military intervention in Yemen.

The row has spurred calls by some top politicians for the resignation of Information Minister George Kordahi, while others opposed such a move, which could undermine the government as a whole.

Following a near three-hour ministerial crisis meeting on Saturday, Education Minister Abbas Halabi said the government could not afford to resign over the diplomatic dispute.

"The country cannot be left without a government," due to other pressing matters and would continue to work to resolve the rift, Halabi said.

Kordahi's resignation would have knock-on effects that could threaten Prime Minister Najib Mikati's coalition government, tasked with addressing a financial crisis dubbed by the World Bank as one of the worst in modern history.

Foreign Minister Abdallah Bou Habib said Mikati's contacts with officials from a number of countries showed opposition to the resignation of the government, formed only last month after a 13-month stalemate.

"They told Mikati, 'if you are thinking about resignation, take that out of your head,'" he said.

Richard Michaels, deputy head of the US mission in Lebanon, had joined the crisis meeting in Beirut, a US embassy spokesperson said, declining to comment further.

Kordahi has been publicly backed by the Iran-linked Hezbollah armed group and has declined to apologise or resign over the comments, which have dealt the worst blow to Saudi-Lebanese relations since Saad al-Hariri's 2017 detention in Riyadh.

The minister's political patron, Suleiman Frangieh of the Christian and Hezbollah-allied Marada Movement, told a news conference he had refused an offer by Kordahi to resign and would not name a successor to him should he do so.

Yet a group of former Lebanese prime ministers called on Saturday for Kordahi to resign, saying his comments had inflicted a strong blow to relations with Gulf Arab countries.

If Kordahi resigns, ministers backed by Hezbollah and its Amal ally could follow suit at a time when the government is already paralysed by a dispute over an inquiry into the August 2020 explosion that devastated parts of Beirut.
Add Comment