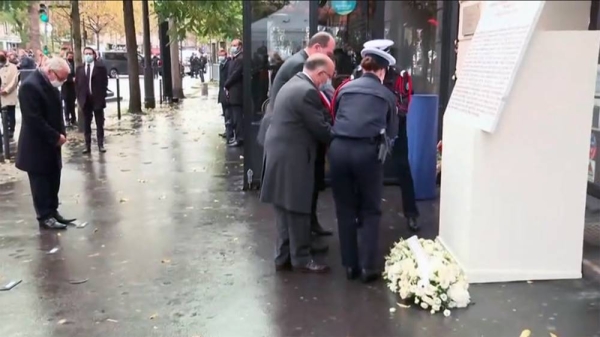 French officials held commemorations to mark the sixth anniversary of the terror attacks in the capital that left 130 people dead.
Outside the Bataclan concert venue, wreaths were laid in front of a plaque listing the names of the 90 people who were shot by intruders on the evening of Nov. 13 2015.

The commemorations come as 20 people are standing trial for their involvement in the attacks, with the verdict expected in May of next year.

A ceremony was also held outside the Stade de France football stadium where the wave of killings began.

Prime Minister Jean Castex and Paris Mayor Anne Hidalgo led the commemorations and were joined by representatives of victims' associations.At the close of her four-day visit to Paris, US Vice President Kamala Harris laid a wreath outside the Carillon bar, where eleven people died.
Add Comment