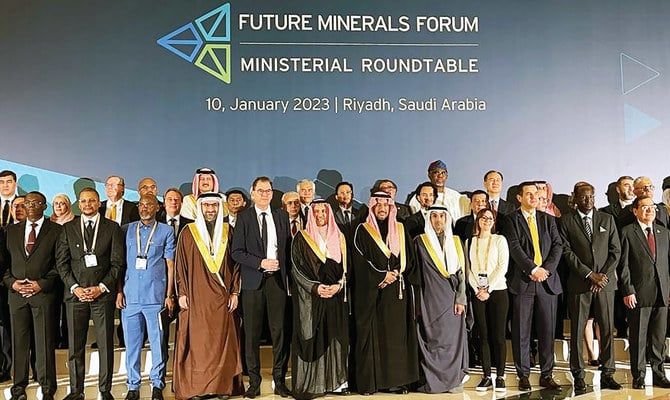 Saudi Arabia, a nation which has been dependent on oil for several decades, is now on a path of transformation as the Kingdom’s Vision 2030 aims to diversify its economy by giving importance to sectors like mineral excavation and tourism.
With mining touted to be a central part of these economic diversification efforts, Saudi Arabia is hosting the second edition of the Future Minerals Forum at the King Abdulaziz International Conference Center in Riyadh.

The event comes as the Kingdom’s mining sector is witnessing a rapid transformation and attracting big investors from various parts of the globe, thanks in part to the government’s launch earlier this year of a new mining law which removed unnecessary formalities and hassles involved in obtaining exploration licenses in Saudi Arabia.

Apart from providing licenses in a very short time, Saudi Arabia is also ensuring that the mining sector in the Kingdom operates in a sustainable manner, especially considering the nation has set the target of net-zero emissions by 2060.

“Sustainability is often overused and misused. If Saudi Arabia is thinking about true sustainability, it needs to go well beyond the way mining is done now to a better future,” Sullivan told Arab News.

He further pointed out that Saudi Arabia should seriously monitor how companies are using and executing mining licenses which are issued to them.

“Liberal approval processes can get the investments in and create a more competitive atmosphere for Saudi Arabia. But Saudi Arabia needs to consider how these mining licenses will be implemented and executed,” said Sullivan.

He noted: “Allowing mining to damage the environment of Saudi Arabia, including its precious water and land, would be a big mistake in making short-term profits. There should be stipulations for protecting the future of Saudi Arabia and for the employment and training of Saudis. Offsets along these lines are very important.”

During the second edition of FMF, an academic report that will provide insights into the future of the mining industry will be presented by minerals and metals expert Peter Bryant, chair of both the Development Partner Institute and Clareo.

Bryant, who spoke during the UN’s Climate Summit, is expected to detail the way in which the mining sector should reimagine itself in fundamental ways on how it extracts metals and minerals.

“While consumers and environmentalists increasingly demand clean energy, many do not realize that the raw materials needed to power their electric cars and trucks, smartphones and rechargeable batteries, all come from mining,” said Bryant, according to a press release flagging up the report.

A recent report by The Payne Institute for Public Policy at the Colorado School for Mines in the US suggested that Saudi Arabia is set to become a “global leader” in the mining sector due to its healthy investment atmosphere.

The report further added the Kingdom is on track to play a central role in the supply of precious minerals needed to power the transition to green energy in order to reach the goal of net zero carbon emissions.

In September, Abdullah Al-Shamrani, CEO of the Saudi Geological Survey, said that Saudi Arabia expects the value of its current mineral wealth to double from the previously estimated $1.3 trillion, due to the rising prices of valuable metals like gold, copper, and zinc.

According to Mohamed Ramady, a London-based economist and former professor at King Fahd University of Petroleum and Minerals, the Kingdom, through the privatization of Saudi Arabian Mining Co., known as Ma’aden, is “moving away from the old policy of mere mineral extraction to a policy aimed at creating a well-integrated mining industry over the next two decades.”

Ramady noted that foreign participation in the Saudi mining sector is considered essential due to the relative lack of experience in this field, in contrast to the petroleum sector where Saudi technical skills exist in all work areas and the FMF will underscore this international interest.

“There are already expressions of interest from many countries with rich mining experience to become involved with Saudi Arabia’s ‘hidden’ treasures. In a couple of decades, mining could be playing a role in the Saudi economy like the one oil played two decades ago,” Ramady told Arab News.

Ramady further added that the FMF will further reemphasize the strategic importance of the mining sector in Saudi Arabia’s economy.

According to Ramady, certain issues need to be solved effectively to further attract foreign investments in the mining sector of Saudi Arabia.

“While the new mineral code law addresses many problems faced by the industry, there are other questions about the timing and process of obtaining mineral concessions, the Saudi government’s right to a specified percentage of net profits, the state’s rights to participate in private mines management and clarification of the exact role of joint venture equity policies,” he said.
Add Comment