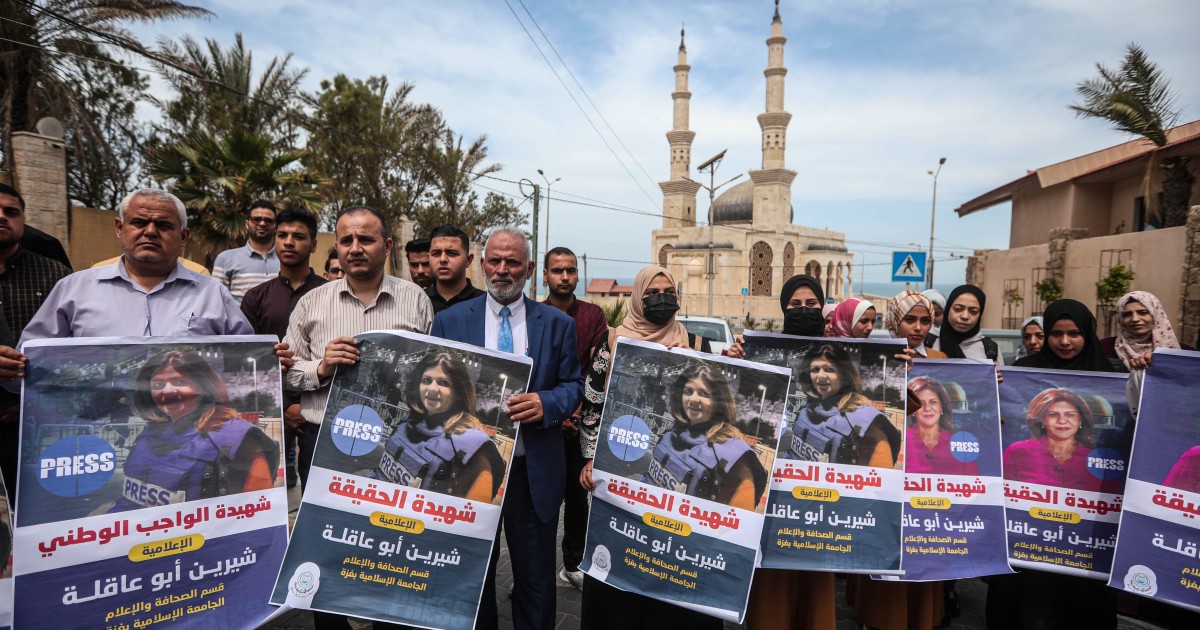 Journalists and people in Gaza Strip pay tribute to the Al Jazeera journalist who was killed by Israeli fire in the occupied West Bank city of Jenin.

Dozens of journalists and representatives of media organisations in Gaza city have come together to condemn the killing of veteran Al Jazeera journalist, Shireen Abu Akleh, by Israeli forces in the occupied West Bank city of Jenin.

A vigil was organised on Wednesday in solidarity with the slain journalist at the site of Al Jazeera office building, which was bombed to rubble by Israel last May. People gathered to honour the longtime TV correspondent for Al Jazeera Arabic in front of Al-Mathaf Hotel, as banners were raised denouncing the crime of the Israeli occupation.

Palestinian Journalists’ Union organised another protest in front of the Al Jazeera bureau in the centre of the besieged Gaza City.

“We affirm as Palestinian journalists that this crime will not affect our will, the occupation will not be able to prevent us from covering the truth, and our coverage will continue,” he said.

Tayseer Muhaisen, the adviser of the Government Information Office in Gaza, said the crime of Abu Akleh’s killing is not the first against Palestinian journalists and will not be the last, adding that Israeli occupation deliberately “obliterates the truth and kills the image that exposes its crimes”.

Muhaisen said since the beginning of this year, his office has documented more than 290 targeting and violations against Palestinian journalists, 51 of which have been targeted directly.

Since 2000, Israel has killed 49 Palestinian journalists, the last of whom was Al Jazeera’s Shireen Abu Akleh, according to the Palestinian Journalists’ Support Committee.

“This crime is deliberate as our colleague Shireen was wearing the press vest, and she is known to the whole world and to the Israeli soldiers,” said Muhaisen speaking a the sit-in in front of Al-Mathaf Hotel.

“This incident shook the entire Gaza Strip and all across the Palestinian territories,” she told Al Jazeera with tearful eyes. “Feelings of pain and sadness swept everyone who talks today about Shireen.”

Akila reiterated that every Palestinian is targeted by Israeli forces, but Shireen, who used to abide by all required safety procedures for journalists, also came under attack. 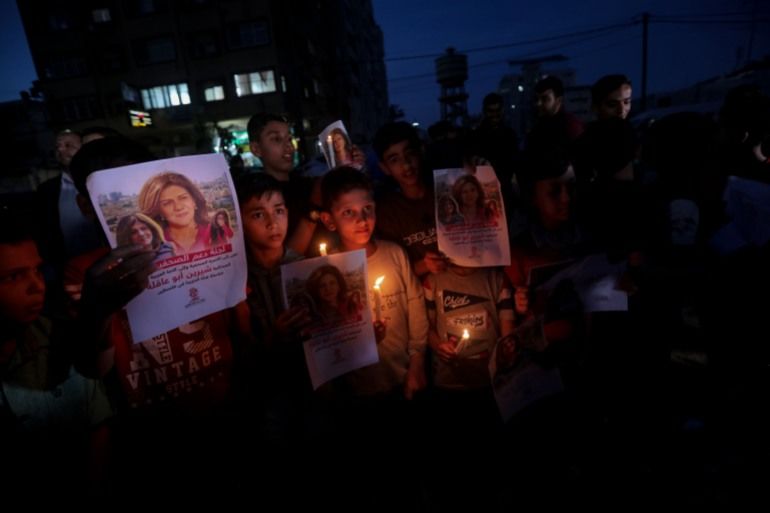 A vigil was organised in solidarity with Akleh

“We lost Shireen today, but we do not know until when the crimes of the Israeli occupation will continue to kill the truth and target the Palestinian journalist?” Akila said.

The killing of Abu Akleh, who was a household name across the Arab world for her bold coverage of the Israeli-Palestinian conflict, has sparked international condemnation, with Qatar-based Al Jazeera Network saying she was “assassinated in cold blood”.

Thousands of people have gathered in Ramallah, the main city in the occupied West Bank, to pay tribute to the slain journalist, who has been described by colleagues and friends as a brave and kind reporter who gave voice to the Palestinian people.

Palestinian factions, including Hamas and Islamic Jihad, the Journalists’ Unions and the Government Information Office have issued statements of condemnation and called to punish the Israeli occupation for its crimes.

The US Department of State has called for an “immediate and thorough” investigation into her killing. 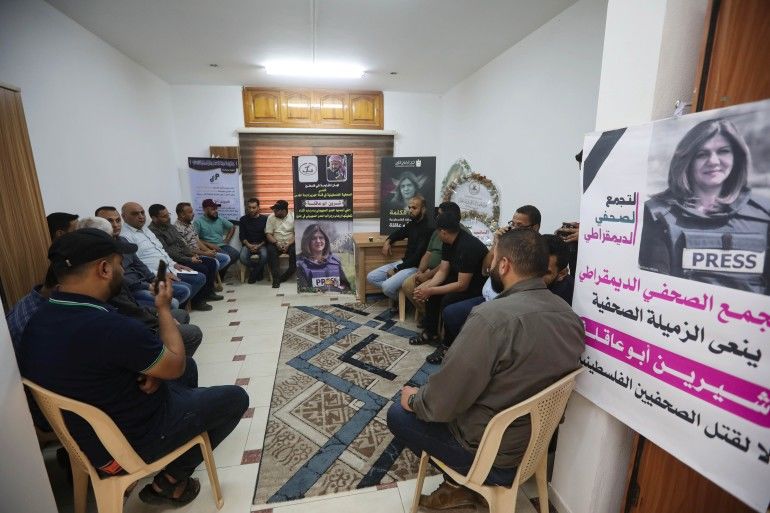