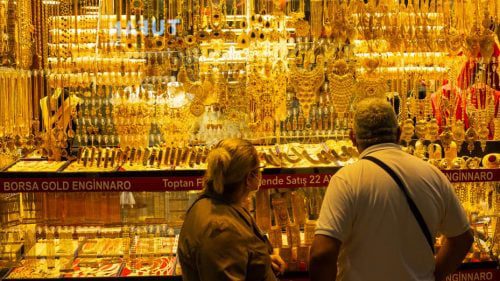 It comes as investors await the release of minutes from the Federal Reserve’s policy meeting, which could provide evidence for further interest rate hikes amid signs of slowing inflation.

She was Gold price Yesterday, Tuesday, its trade ended with a decline of more than 8 dollars, with the increase in US Treasury yields.

At the same time, the price of futures contracts fell For Friday – September delivery – 0.86%, $ 20.03 an ounce, according to data seen by the specialized energy site.

continued US Treasury yields A 10-year rally, meanwhile, stabilized the US dollar near a 3-week high.

“Pay attention to the July FOMC meeting minutes and the Jackson Hole Symposium, which the leaders will attend. Central banks Finance ministers, academics and financial market participants from around the world will gather on August 25-27 to pave the way for the Federal Reserve’s September meeting.”

“If we get a very dovish view from the Federal Reserve on raising interest rates, that would be somewhat negative given the key appeal of gold to investors,” he added. Reuters.

Customers look at golden lanterns at a shop in Turkey – Archive

To curb high inflation, the US Federal Reserve has raised overnight interest rates by a total of 225 basis points since March.

It is expected to raise its policy rate by another 50 or 75 basis points at its next meeting on September 20-21.

While gold is seen as a hedge against inflation, rising US interest rates are eroding the attractiveness of low-yielding bullion.

Despite signs of easing inflation in the world’s largest economy, Federal Reserve officials maintained a dovish tone about future interest rate hikes, pushing gold prices back from the key $1800 level.

Data on Tuesday showed U.S. homebuilding fell to the lowest level in nearly a year and a half in July, while mortgage rates and building materials prices rose.

On the other hand, UK consumer price inflation rose to 10.1% in July, the highest level since February 1982, from an annual rate of 9.4% in June, adding to pressure on households.

Shares in the SPDR Gold Fund, the world’s largest gold-backed ETF, fell 0.18% to 992.20 tonnes on Tuesday, the lowest level since January.