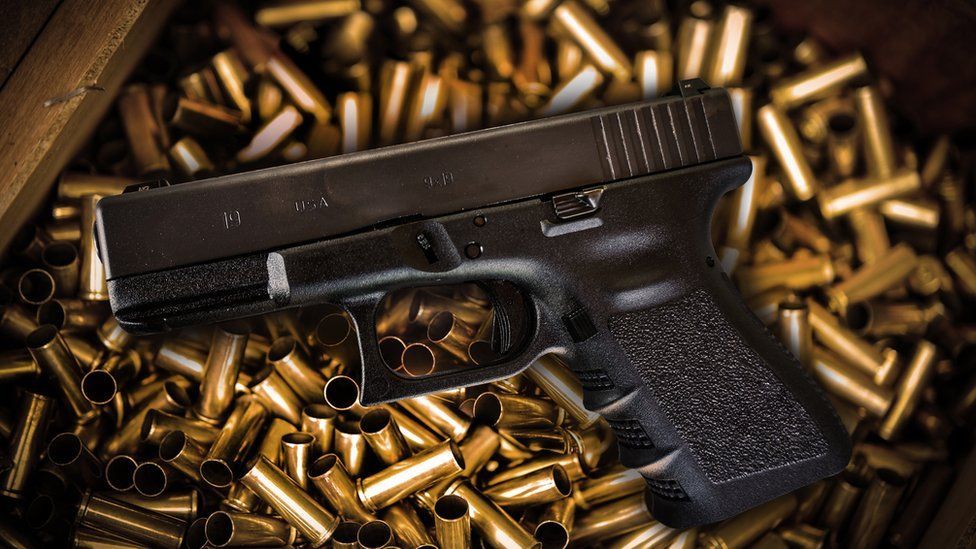 Gun deaths were the leading killer of US children in 2020

Guns overtook car crashes to become the leading cause of death for US children and teenagers in 2020, new research shows.

Data from the Centers for Disease Control and Prevention (CDC) shows that over 4,300 young Americans died of firearm-related injuries in 2020.

While suicides contributed to the toll, the data shows that homicides form the majority of gun-related deaths.

More than 390 million guns are owned by US civilians.

According to the research - which was published this week in the New England Journal Medicine - the rise in gun-related deaths among Americans between the ages of one and 19 was part of an overall 33.4% increase in firearm homicides nationwide.

Over the same time period, the rate of firearm suicides in the US rose by 1.1%.

The overall rate of gun deaths of all reasons - suicide, homicide, unintentional and undetermined - among children and teenagers rose by 29.5%, more than twice that of the wider population.

"We continue to fail to protect our youth from a preventable cause of death," said a research letter published in the journal on Wednesday.

The rate of gun-related deaths per 100,000 residents rose among both men and women and across ethnic demographics between 2019 and 2020, with the largest increase among black Americans.

In past years, gun-related deaths were second only to car crashes as the leading cause of death among young Americans. Car deaths, however, have fallen over time and in 2020 approximately 3,900 Americans under 19 died in vehicle crashes.

Incidents of drug overdoses and poisonings rose 83.6% between 2019 and 2020, and now are the third leading cause of death in that age group. A separate study published earlier in April found that 954 young people died of overdoses in 2020, compared to 492 in 2019.

Gun violence in the US has increased since the Covid-19 pandemic began in early 2020.

"The reasons for the increase are unclear," the research letter said. "It cannot be assumed that firearm-related mortality will later revert to pre-pandemic levels".

A separate study, published in the Annals of Internal Medicine in February, found that 7.5 million US adults - just under 3% of the population - became first-time gun owners during the pandemic between January and April 2021.

This, in turn, exposed 11 million people to household firearms, including five million children.