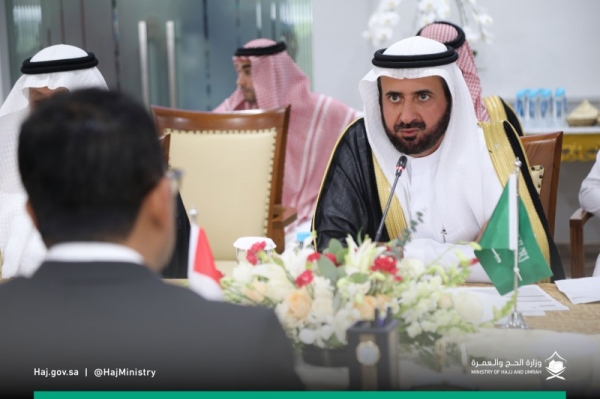 Minister of Hajj and Umrah Dr. Tawfiq Al-Rabiah said that the government and people of Saudi Arabia welcome an unlimited number of Umrah performers coming from Indonesia without any age restrictions. The minister made the remarks during his recent official visit to the most populous Muslim nation.
During the visit, Al-Rabiah held seven extensive meetings with officials from the public and private sectors in Indonesia. Their discussions mainly focused on facilitating the arrival of Umrah performers in Makkah and Madinah, after a pause in the movement of pilgrims between the two countries during the last two years following the outbreak of the coronavirus pandemic.

The minister stressed the need to resume flights between the two countries to the level of what they were before the outbreak of the pandemic. “The number of pilgrims from Indonesia is the highest among the pilgrims from all other Muslim countries. Indonesian pilgrims’ number exceeded one million in the past few months while more than 211,000 pilgrims performed Hajj during the last season,” he said.

Al-Rabiah called on all those wishing to perform Umrah to visit the Islamic and historical sites in the Kingdom, especially in Makkah and Madinah, so as to enrich their religious experience. “The Kingdom houses a large number of religious and historical sites worth visiting, the latest of which is the inauguration of eight new sites in Madinah,” he pointed out.

Al-Rabiah underlined the ministry’s keenness to provide the best services for pilgrims with the highest quality standards, under the umbrella of the Pilgrim Experience Program, one of the Saudi Vision 2030 implementation programs. He highlighted the significance of the great role to be played by all parties involved in the Hajj and Umrah services in this regard.

The minister also underscored the unlimited support and constant care of Custodian of the Two Holy Mosques King Salman and Crown Prince and Prime Minister Mohammed bin Salman for the comfort and safety of pilgrims and visitors.
#Coronavirus  #Vaccines
Add Comment