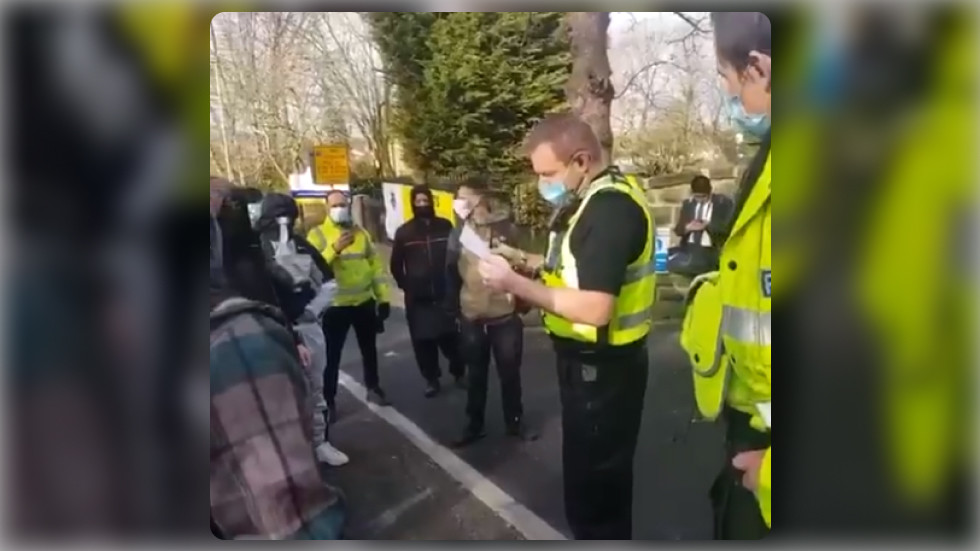 Police were called to Batley Grammar School in West Yorkshire on Thursday as angry parents gathered at the school’s gates to protest the alleged showing of a Prophet Mohammed cartoon during a religious education lesson on Monday.

Local residents and parents descended on the Yorkshire grammar school on Thursday despite headmaster Gary Kibble writing a “sincere and full apology” to those offended by a picture allegedly shown in a religious studies lesson, which Kibble labelled “completely inappropriate.”

The gathering began around 7:30am on Thursday at the non-fee-paying grammar school with reports of angry parents and students chanting “Allahu akbar” (God is greater).

The school elected to delay the start of the school day until 10am due to the disturbance. At 10:30am, around 20-30 pupils were seen outside the school gates as the demonstration continued.

Despite Kibble’s attempt to diffuse the situation with his apology, locals exchanged messages on social media on Wednesday and called on each other to gather on Thursday morning. One message, which included the name of the teacher at the centre of the accusations, urged people to protest and “defend the honour of our prophet Mohammed.”

“It is imperative that all of us turn up to demand the resignation of this teacher as an absolute minimum and fulfil our duty of defending the honour of RasoolAllah,” another message read.

A local imam claimed the school had suspended the teacher in question which was later confirmed by the headteacher.

Some Britons have taken to social media to share their outrage that such a protest, in the name of the prophet Muhammad, would take place in the UK. Conservative political commentator Darren Grimes highlighted that there are no blasphemy laws in Britain and that teachers can explore all religions and themes as they please.

Another Twitter user shared his disdain for the “fury” of parents, writing that “people who do not understand The Enlightenment & western liberal democracy are free to leave.” Others accused the school of waving the “white flag” by apologising.

Among a sea of comments criticizing the parents and pupils for their protest, there were some who acknowledged their right to be offended by the showing of the prophet during a class. Journalist, researcher and Muslim convert Robert Carter applauded Batley Grammar School for suspending the teacher, noting that after Samuel Paty’s beheading in France for showing a caricature of the prophet, this teacher “should have known better.”

The market town of Batley, like a number of places in Yorkshire, has a sizeable Muslim population. According to 2011 census data, there were almost 15,000 followers of Islam in the town of 80,000 people.

In October 2020, Paris schoolteacher Samuel Paty was beheaded by a student after he showed a cartoon of the Prophet Mohammed during a lesson about free speech.