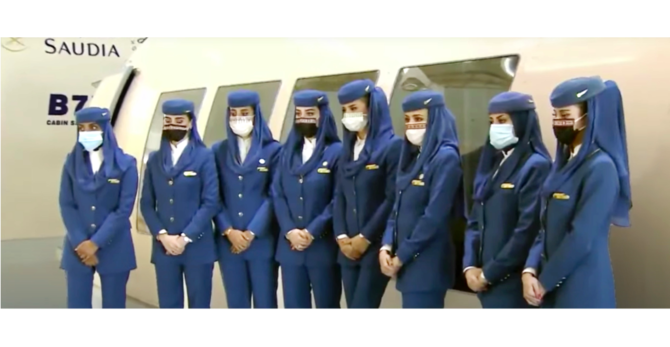 Saudi women continue to embrace the new career opportunities that have opened up to them in the Kingdom in recent years, with a determination to succeed. One of the sectors in which they are increasingly making their mark is aviation.
Flight attendant Anhar Tashkandi joined Saudia airline two years ago.

“We completed the training period, which focused on ensuring the passengers’ comfort and safety,” she said. “This job offers us the opportunity to visit different countries and learn from their cultures.”

Saudi women now work as flight attendants alongside male colleagues, a job that was previously restricted to women from other countries.

Ashwaq Nasser told of her pride at being one of the first Saudi women to work in the profession.

“I would like to take this opportunity to thank my parents for supporting my choice of becoming a flight attendant,” she said. “I would also like to thank Saudia airline for providing us with the opportunity to join this program.”

Her colleague, Reham Bahmishan said that since childhood she had wondered why there were no Saudi female flight attendants.

“When I later saw that the Saudia airline was accepting applications for this position, I was very excited and applied immediately,” she said. “Thanks to Saudia, I am currently living my childhood dream.”
Add Comment