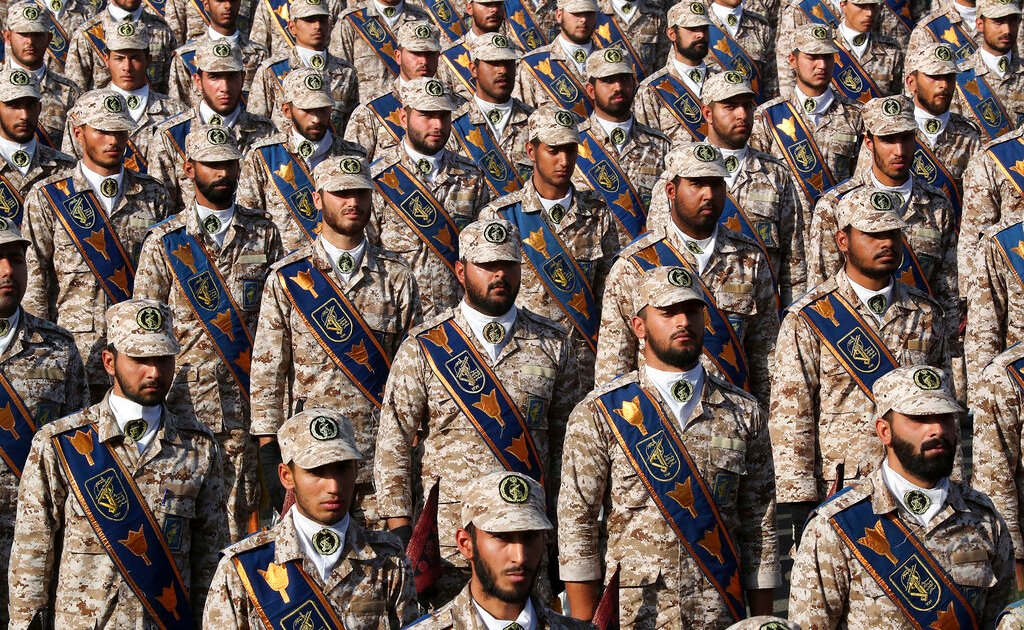 How US blacklisting of IRGC is stalling Iran nuclear deal revival

Iran wants its Islamic Revolutionary Guard Corps removed from US ‘terror’ list, a demand Biden is reluctant to grant.

After weeks of optimism around the prospect of restoring the Iran nuclear deal earlier this year, the fate of the agreement appears to be in limbo again with no further talks on the calendar and Washington’s attention focused on Ukraine.

The push to revive the deal seems to have stalled over the US designation of Iran’s Islamic Revolutionary Guard Corps (IRGC) as a “foreign terrorist organization”, with American officials reluctant to meet Tehran’s demand to remove the group from the blacklist to seal the deal.

The 2015 nuclear pact, formally known as the Joint Comprehensive Plan of Action (JCPOA), saw Iran scale back its nuclear programme in exchange for the lifting of international sanctions against its economy.

Former US President Donald Trump withdrew from the agreement in 2018 and launched a “maximum pressure” campaign of sanctions against Iran. In turn, the Iranian government started escalating its nuclear programme well beyond the limits set by the JCPOA.

President Joe Biden and his top aides say they are committed to reviving the deal through mutual compliance but have warned that the clock is ticking. Here, Al Jazeera looks at where things stand – and what US analysts say is halting a return to the agreement.

What is the IRGC?

The IRGC was established as a branch of the Iranian military by the founder of the Islamic Republic of Iran, Ayatollah Ruhollah Khomeini, after the 1979 revolution.

It was meant to be an ideologically driven force, loyal to the revolution and the new form of government that it produced after the overthrow of Shah Mohammad Reza Pahlavi. Soon after its founding, the IRGC played a major role in the Iran-Iraq war from 1980 to 1988.

Now the force operates as part of the military, with conscripts joining its rank to fulfil the country’s mandatory military service requirements. But the organisation maintains its own interests and projects inside and outside of Iran – answering ultimately to Supreme Leader Ali Khamenei.

The IRGC’s Quds Force, which is responsible for the group’s foreign operations, has been vital to Iran’s regional policies, including its support for various paramilitary groups across the Middle East.

Why did the US blacklist the force?

The Trump administration added the IRGC to the US Department of State’s list of “foreign terrorist organizations” (FTO) as part of its post-nuclear deal, “maximum pressure” campaign against Iran.

“This is the first time that the United States has designated a part of another government as an FTO,” then-Secretary of State Mike Pompeo said at that time.

“We’re doing [this] because the Iranian regime’s use of terrorism as a tool of statecraft makes it fundamentally different from any other government. This historic step will deprive the world’s leading state sponsor of terror the financial means to spread misery and death around the world.” 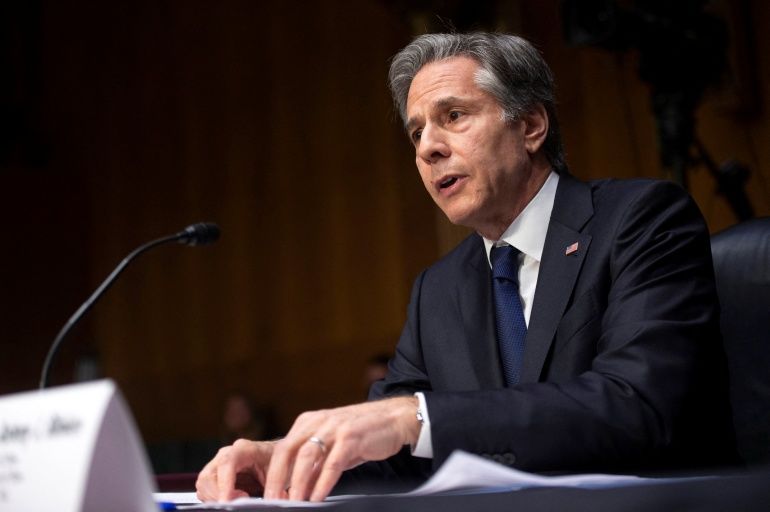 ‘As a practical matter, the designation does not really gain you much,’ Antony Blinken says of IRGC blacklisting

What did the FTO designation do?

Not much, analysts and officials said. With the IRGC leadership under a host of other “terrorism” and human rights-related sanctions, the FTO designation did not fundamentally change the way the Revolutionary Guard operates.

US Secretary of State Antony Blinken told lawmakers last month that blacklisting the IRGC had a minimal impact on the organisation. “As a practical matter, the designation does not really gain you much because there are myriad other sanctions on the IRGC,” Blinken said.

He explained that the “terrorism” label imposes a travel ban on Guard members, many of whom were conscripted into the organisation without having a say as part of their military service, but said “the people who are the real bad guys have no intention of travelling here, anyway.”

Barbara Slavin, director of the Future of Iran Initiative at the Atlantic Council, a Washington-based think-tank, said the designation is “superfluous and symbolic”.

“The IRGC is under all kinds of other sanctions, and nobody is going to be doing business with them,” Slavin told Al Jazeera.

Then, why is Iran insisting on de-listing the IRGC?

Alex Vatanka, director of the Iran Program at the Middle East Institute, another think-tank in the US capital, detailed several elements that make the “terrorist” label a critical issue for the IRGC itself:

*  Prestige: “They don’t want to be called terrorists. Internationally, it’s not a good thing to have hanging around their necks.”

*  Iranian politics: “It could also undermine them within the Iranian cutthroat politics. You could see a situation where other factions within the regime will go after IRGC – ‘You are the ones that result in us being isolated’.”

*  Fear of assassinations: “They believe that it gives the United States a green light or blank cheque to assassinate anybody in the IRGC senior command; if they’re on the terrorism list, then there might be more assassinations in the way the US carried out against [Quds Force commander] Qassem Soleimani back in 2020.”

*  Economic interests: “There are literally hundreds of companies in Iran that have ties to the IRGC. So getting off the terrorism list will help just a little bit in terms of their business operations and ability to make money.”

For her part, Slavin said de-listing the IRGC is also crucial for Iran’s hardline President Ebrahim Raisi, who she says has not been able to secure any major achievements since coming into office last year.

“It’s internal politics I think more than it is external. Raisi is not popular … So they’d like to be able to say, ‘Look, we got this out of the Americans’,” she said.

What is stopping Biden from de-listing the group?

In practice, nothing. Just as Pompeo designated the IRGC under Trump, Biden can ask Blinken to undo the move. And there is a recent precedent for that; early into the Biden administration, the US reversed a Trump-era decision to add Yemen’s Houthi rebels to the FTO list.

But the issue is “politically sensitive” for Biden, Slavin said.

The US president is already facing mounting pressure from legislators and others against returning to the nuclear deal, and a concession on the IRGC will certainly turn up the heat from hawks in Congress, including some Democrats. The Quds Force and its allies are accused of targeting American troops in Iraq and other parts of the region.

Last week, the US Senate in a 62-33 vote passed a non-binding amendment opposing the de-listing of the IRGC; sixteen lawmakers from Biden’s Democratic Party joined Republicans in passing the measure.

Still, Slavin said any political damage that reviving the 2015 deal could create for Biden would not be serious. “I don’t think Biden is really engaged by this in the same way certainly that [Barack] Obama was. And if it’s got any potential political downside, I think he’s just going turn away from it,” she told Al Jazeera.

Vantaka also said Biden could go through with the deal and “own it”, despite fears of being perceived as weak on Iran, because foreign policy is not a top priority for voters, who will head to the polls in November for important mid-term elections.

What has the US said so far?

Despite the IRGC impasse, Biden’s top aides continue to say they are still committed to restoring the JCPOA based on mutual compliance. And while US officials have been reluctant to divulge details of the indirect talks with Iran in Vienna, Blinken has suggested that the Guard’s “terror” designation falls outside the purview of the nuclear deal and therefore requires separate concessions from Iran.

“Irrespective of the nuclear negotiation – just with regard to the FTO – it would require Iran to take certain actions and to sustain them,” he told lawmakers last week, without specifying the exact steps.

So for now, it appears that Washington is refusing to de-list the IRGC strictly to secure a deal. The JCPOA only addresses Iran’s nuclear programme and US-led nuclear-related sanctions.

But some proponents of diplomacy say the blacklisting of the IRGC was part of Trump’s “maximum pressure campaign” and was aimed to achieve what it is doing now – making a return to the JCPOA more difficult.

“If the US really wants to turn the page with Iran and pursue sustained engagement and get away from these policies of maximum pressure, then this designation is going to be a major issue because for the Iranians, it goes to the core legitimacy of their system,” said Toossi, the analyst.

With the nuclear talks on ice, European intermediaries have been trying to resolve the issue with EU coordinator Enrique Mora visiting Washington and Tehran recently.

Qatar’s Emir Sheikh Tamim bin Hamad Al Thani also met with Raisi and Khamenei in Tehran this week in a visit that partly aimed to help resolve the standoff.

EU foreign policy chief Josep Borrell said on Friday Iran’s response to Mora’s push to revive the deal was “good enough”, adding that “these things cannot be resolved overnight”. But a State Department spokesperson told the AFP news agency the same day that a return to the agreement “remains far from certain”.

Washington has been warning for months that there will come a point when the deal’s non-proliferation benefits become moot because Tehran is gaining irreversible nuclear knowledge. We are not there yet, the Department of State recently said.

Both Vantaka and Toossi suggested one possible solution to the impasse: Keeping the Quds Force on the FTO list while removing the broader “terrorist” label on the IRGC.

The Department of the Treasury named the Quds Force as a “specially designated global terrorist” in 2007, so keeping it on the Department of State’s FTO would not be a major change from the pre-Trump status quo, Toossi said.

Slavin said another way to tackle the IRGC situation is through further negotiations after reviving the deal.

“The Iranians can agree and the Americans can agree that they will discuss this issue in follow-on talks, which is what the US has always wanted, frankly,” she said. “And these follow-on talks can deal with whatever anybody wants them to deal with, including additional sanctions relief for Iran.”