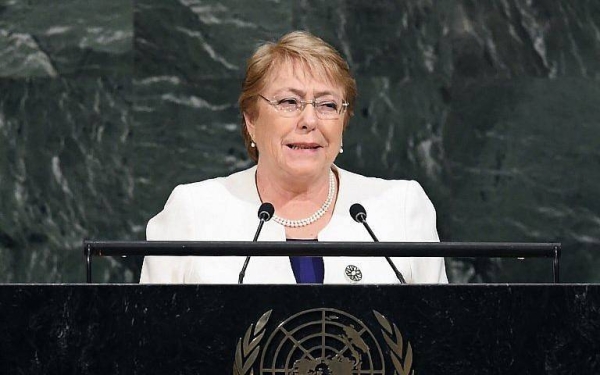 The UN High Commissioner for Human Rights said on Friday that she continues to be alarmed by “persistent allegations” of “widespread and systematic torture” of protesters in Belarus.
Gender-based violence is of serious concern, with reports that approximately 30 percent of those arbitrarily detained were women and girls, Michelle Bachelet told the Human Rights Council in Geneva.

She highlighted ongoing police raids against civil society groups and independent media, and the politically motivated arrests and criminal prosecutions of activists and journalists.

More than 650 people are believed to be in prison because of their opinions – including the head of the well-known human rights group, Viasna.

Ms Bachelet noted that the Belarusian authorities primary aim, was suppressing criticism and dissent of Governmental policies, rather than any protection of human rights law.

She added that she regretted that the request for a meeting with the Belarus Ambassador had been rejected, preventing a working visit to the country.

The UN rights chief said that as of 10 August, 27 journalists and media workers remain in detention, including the high profile blogger Roman Protasevich, who was arrested in May along with his Russian partner, after his flight from Greece to Lithuania was diverted to Belarus, sparking worldwide condemnation.

Responding to statements at the Council, Belarus said its government had restored order in the country and “people were working and leading their normal lives”.It insisted that the actions of the authorities of Belarus are aimed at preserving order and protecting the rights of all citizens.

Reiterating its disagreement with resolution 46/2, which condemns “ongoing grave violations of human rights in Belarus”, it stated that the position of the Government had been ignored and the main goal of protests was a revolutionary transition of power.

Ms. Bachelet told the meeting that a range of accountability measures could be considered by the Council, however, only 50 per cent of the resources available for the mandate had been approved.

She said she hoped this would be increased in 2022. The UN rights chief also insisted that direct access to the country was important, for example, to physically access detention facilities. She noted however, that “much could be achieved even without physical access”.
Add Comment