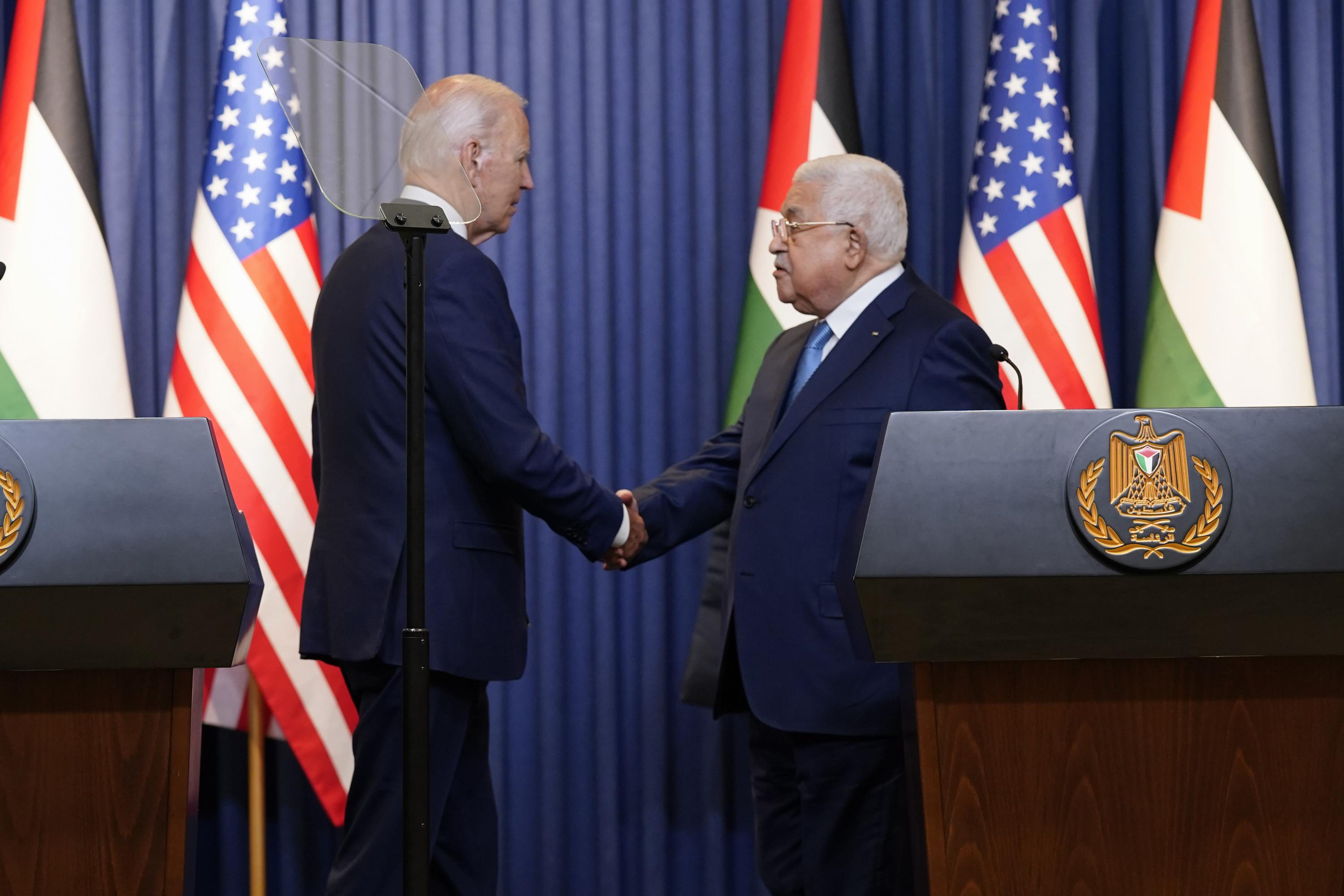 In West Bank, Biden says 'ground is not ripe' for peace

During a visit to the Israeli-occupied West Bank on Friday, President Joe Biden offered compassion and financial assistance for hope-starved Palestinians but also delivered a blunt acknowledgment that the “ground is not ripe” for new attempts to reach an elusive peace.

Political uncertainty in Israel, which is holding another round of elections in November, and the weakness of Palestinian Authority leadership has dimmed any chance of restarting negotiations that broke down more than a decade ago.

The stalemate has left millions of Palestinians living under Israeli military rule. Biden said they “deserve a state of their own that’s independent, sovereign, viable and contiguous. Two states for two peoples, both of whom have deep and ancient roots in this land, living side by side in peace and security.”

Although such a goal “can seem so far away,” he said he wouldn’t abandon the dormant peace process.
“Even if the ground is not ripe at this moment to restart negotiations, the United States and my administration will not give up on bringing the Palestinians and the Israelis, both sides, closer together,” Biden said during a joint appearance with Palestinian Authority President Mahmoud Abbas.

Biden offered more than $300 million for the Palestinians on Friday, including $201 million for a United Nations agency that helps refugees and a proposed $100 million for hospitals. The health care funding requires congressional approval.

Israel has also committed to upgrading wireless networks in the West Bank and Gaza, part of a broader effort to improve economic conditions.

However, Biden did not criticize Israel for expanding settlements, some of which resemble sprawling suburbs, in occupied territory that the Palestinians want for a future state. Nor did he mention his unfulfilled pledge to reopen a U.S. consulate in east Jerusalem, which served as a de facto embassy to the Palestinians before President Donald Trump closed it three years ago.

Abbas, in his own remarks, said “the key to peace” in the region “begins with ending the Israeli occupation of our land,” and he said Israel “cannot continue to act as a state above law.”

He also raised the death of Palestinian-American journalist Shireen Abu Akleh, saying her killers “need to be held accountable.”

Abu Akleh was shot during an Israeli military raid in the West Bank in May, and U.S. officials say she was likely killed unintentionally by Israeli troops. However, they did not say how they reached that conclusion, and the outcome angered many Palestinians, including her family, who accuse the U.S. of trying to help Israel evade responsibility.

He called her death “an enormous loss to the essential work of sharing with the world the story of the Palestinian people.”

Palestinian journalists wore black T-shirts with Abu Akleh’s picture and placed a poster of her on an empty chair in the room where the leaders spoke.

Biden’s trip to the West Bank was met with skepticism and bitterness among Palestinians who believe he has taken too few steps toward reviving peace talks, especially after Trump sidelined them while heavily favoring Israel.

Israel’s outgoing government has taken steps to improve economic conditions in the occupied West Bank and Gaza. But Yair Lapid, the 58-year-old caretaker prime minister, has no mandate to hold negotiations. Nov. 1 elections could also bring to power a right-wing government that is opposed to Palestinian statehood.

Meanwhile, the 86-year-old Abbas, whose Palestinian Authority administers parts of the occupied West Bank and cooperates with Israel on security, is more representative of the status quo than Palestinian aspirations.

His Fatah party lost an election, and control of Gaza, to the Islamic militant group Hamas more than 15 years ago. He called off the first national elections since then last year — blaming Israel — when Fatah appeared to be heading for another crushing defeat. Polls over the past year have consistently found that nearly 80% of Palestinians want him to resign.

On Friday, Hamas criticized Abbas for meeting with Biden, calling the U.S. “a partner in the aggression on our people.”

Palestinian leaders fear being further undermined by the Abraham Accords, a diplomatic vehicle for Arab nations to normalize relations with Israel despite the ongoing occupation. Biden, who traveled to Saudi Arabia later Friday to attend a summit of Arab leaders, hopes to broaden that process, which began under Trump.

Hours before Biden was set to become the first U.S. leader to fly directly from Israel to Jeddah, Saudi Arabia, the kingdom’s General Authority of Civil Aviation signaled the end of its strict limits on Israeli flights over its territory. Biden called the decision “an important step towards building a more integrated and stable Middle East region.”

It wasn’t the first presidential flight directly between Israel and the kingdom. President George W. Bush flew from Tel Aviv directly to Riyadh in 2008, and President Donald Trump flew from Saudi Arabia directly to Israel in 2017, but the White House nevertheless called it “historic.”

During his appearance with Abbas, Biden said he hopes that the Abraham Accords could ultimately benefit the Palestinians as well.

“I do believe that in this moment when Israel is improving relations with its neighbors throughout the region, we can harness that same momentum to reinvigorate the peace process between the Palestinian people and the Israelis,” he said.

However, apart from his visit to the West Bank, there was little mention of the Palestinians during the two days Biden spent in Israel, which he praised as a democracy that shares American values. At a news conference with Biden, Lapid evoked the U.S. civil rights movement to portray Israel as a bastion of freedom.

It all reeked of hypocrisy to Palestinians, who have endured 55 years of military occupation with no end in sight.

“The idea of shared values actually makes me sick to my stomach,” said Diana Buttu, a Palestinian lawyer and political analyst. “I don’t think Israeli values are anything that people should be striving towards.”

Both Biden and Lapid said they support an eventual two-state solution but their approach, often referred to as “economic peace” because of its focus on financial assistance and business development, has limitations.

“Mr. Biden is trying to marginalize the Palestinian issue,” said Mustafa Barghouti, a veteran Palestinian activist. “If he does not allow Palestinians to have their rights, then he is helping Israel kill and end the very last possibility of peace.”

Roughly 700,000 Jewish settlers now live on annexed land in east Jerusalem and the West Bank, which were seized in the Six Day War in 1967. Most of the world considers the expanding settlements illegal.

Well-known human rights groups have concluded that Israel’s seemingly permanent control over millions of Palestinians amounts to apartheid. One of those groups, Israel’s own B’Tselem, hung banners in the West Bank that were visible from the presidential motorcade.

Israel rejects that label as an attack on its very existence, even though two former Israeli prime ministers warned years ago that their country would be seen that way if it did not reach a two-state agreement with the Palestinians. The U.S. also rejects the apartheid allegations.