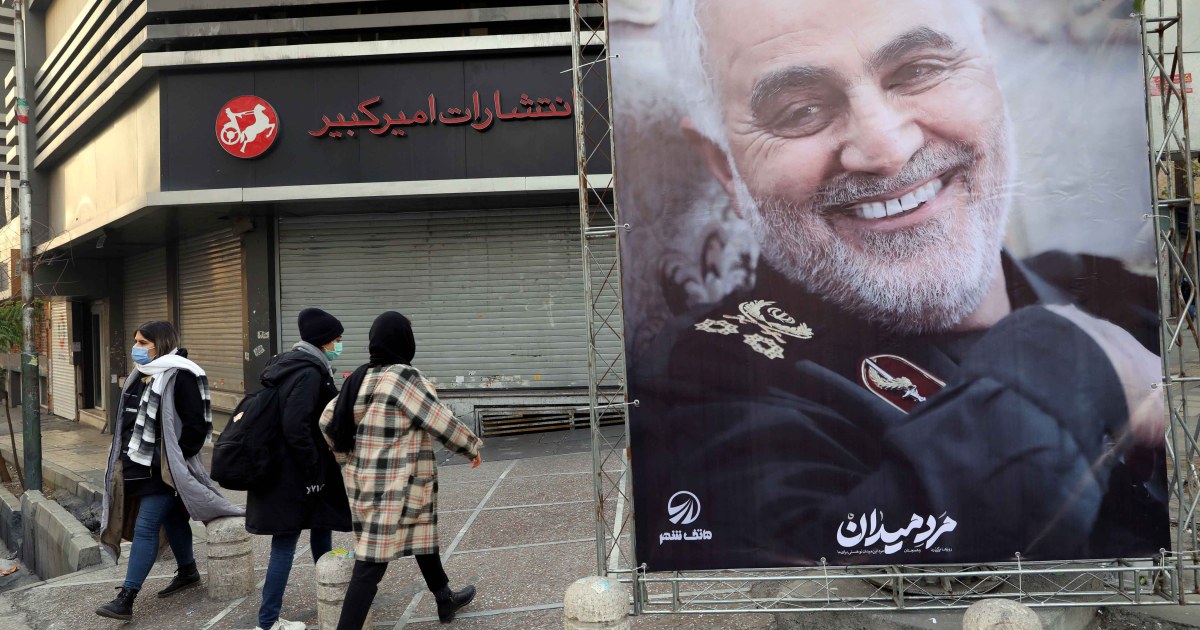 Iran calls for UN action on US over killing of Soleimani

Request comes amid a week of events planned by Iranian officials on second anniversary of Soleimani’s killing on January 3.

Iran has called on the United Nations to take formal action against the United States for the assassination of its top general two years ago.Iran says Qassem Soleimani, the then-commander of the elite Quds Force of the Islamic Revolutionary Guard Corps (IRGC), was in Iraq’s capital Baghdad on a diplomatic mission when his convoy was destroyed by missiles fired from a US drone.

In a letter to the UN General Assembly published late on Saturday, the legal department of Iran’s presidential office called for “all legal initiatives in its power, including issuing a resolution” to condemn the US government and discourage similar moves in the future.

The letter said US governments have, for years, displayed an “excessive unilateralism” in their actions that has granted them the power to violate international laws and agreements.

The missive comes shortly ahead of the second anniversary of Soleimani’s killing on January 3.

Former US President Donald Trump, who ordered the killing, said at the time that Soleimani was “the world’s top terrorist” and “should have been terminated long ago”.

Iraqi commander Abu Mahdi al-Muhandis and several others were also killed in the attack.

The UN rapporteur for extrajudicial killing in July 2020 concluded in a report that Soleimani’s assassination was “unlawful” and “arbitrary” and violated the UN charter.

Last year, Iran requested Interpol “red notices” against dozens of US officials, including Trump who also had an arrest warrant issued by an Iraqi court.

Soleimani’s killing brought Iran and the US to the verge of war.

The IRGC launched 12 missiles at two US bases in Iraq in the largest ballistic missile attack ever against the Americans. No casualties were reported but more than 100 US service members were reported to have suffered traumatic brain injuries.

On Sunday, Iran’s Supreme Leader Ayatollah Ali Khamenei, who had promised “harsh revenge” for Soleimani, said in a speech that the perpetrators of his assassination will be consigned to the “landfill of history” after “they pay their worldly dues”.

Iranian officials are planning multiple events to mark the second anniversary of Soleimani’s assassination and the missile launches against US bases.

On Monday, an event is being organised in the capital Tehran, which is expected to be attended by top government and military officials.

President Ebrahim Raisi and other top figures are expected to address the televised event.

Ending a week of ceremonies will be an exhibition of Iran’s missile capabilities on Friday.

In Iraq, thousands gathered on Sunday to mark Soleimani’s killing.