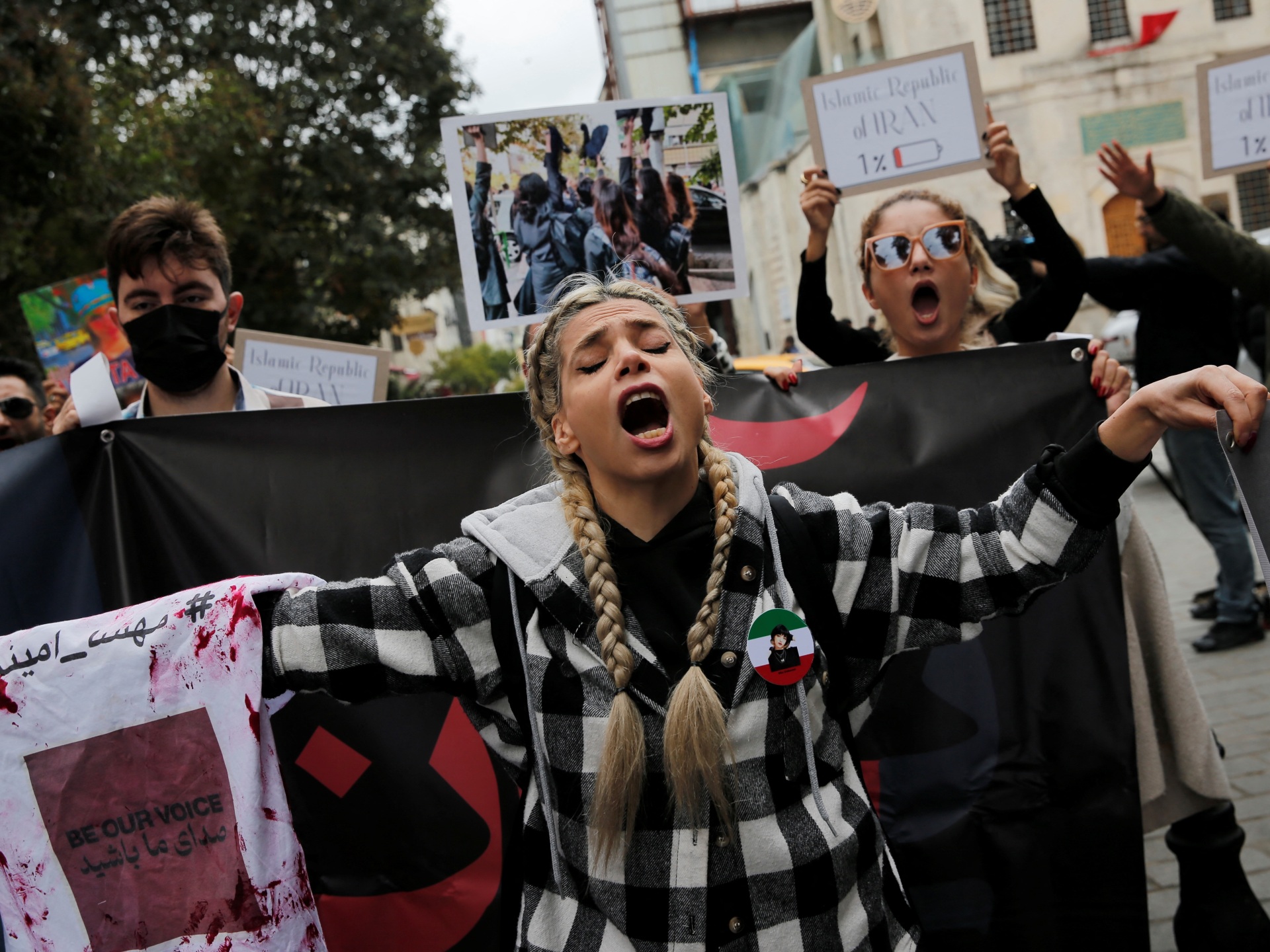 Niloufar Mardani is the latest athlete to not follow Iran’s hijab rules when competing abroad, in what has been interpreted as support for anti-government protests.

Iranian authorities have denounced a professional skater who competed abroad without adhering to the country’s mandatory hijab rules amid protests sparked by the death of Mahsa Amini.

Protests that erupted following 22-year-old Amini’s death in the custody of the country’s so-called morality police, after she was arrested for alleged non-compliance with a mandatory dress code, are approaching the end of their second month.

On Sunday, Niloufar Mardani, who has been a member of the national Iranian speed skating team for years, stepped on a podium in Turkey to receive her first-place award while not wearing a headscarf – as is mandatory for female athletes representing Iran even when competing outside of the country.

A picture circulating on social media of Mardani on the podium in Istanbul also showed her wearing a black shirt with the word “Iran” on it.

In a short statement, Iran’s sports ministry emphasised “maintaining Islamic values in sports competitions” and said Mardani had not competed in clothing approved by the ministry.

“This athlete has not been a member of the Iranian national team since last month and attended this competition as part of a personal trip without obtaining necessary permits,” the statement said, before adding that the Iranian team had not participated in the tournament.

Last month, professional rock climber Elnaz Rekabi represented the Iranian national team in an international tournament in South Korea while not wearing a headscarf, making headlines across the globe.

A crowd had gathered to welcome her in the early hours of the morning when her flight touched down in Tehran as some believed she had taken her veil off in an act of defiance. In an interview with state television at the airport, Rekabi apologised and said that there had been an “inadvertent” issue with her hijab as she had been quickly called to compete.

The issue of the hijab has featured prominently in the country’s ongoing protests, with videos online showing some women burning their veils or cutting their hair.

But male athletes have also made headlines in recent weeks as footballers have repeatedly refused to celebrate after scoring goals in the country’s league matches.

On Sunday, Saeed Piramoun, a member of the Iranian national beach football team, held up his hair and mimed cutting it off after scoring Iran’s winning goal in the final match against Brazil in an international tournament in the United Arab Emirates (UAE). The symbolic move was seemingly aimed at supporting the protests.

Piramoun and other members of the national team had refused to sing along with the national anthem at the start of the match, and at the end of it, they refused to celebrate as they lifted the world champions’ trophy.

A number of fans chanted anti-establishment slogans inside the stadium and proceeded to do the same outside following the match, prompting the official newspaper of the Iranian government to warn the UAE of “consequences for its hostile political action” of not stopping the crowd from chanting.

The Iranian beach football federation on Monday vowed action against “those who did not adhere to professional and sports ethics” in line with regulations. Reporters were barred from speaking with the members of the team at the airport upon their return.

Iran’s upcoming participation in the FIFA World Cup in Qatar has also caused controversy, with Ukraine and some others calling for the Iranian team’s removal, although it appears highly unlikely that would happen.

The protests have persisted despite stringent internet restrictions and a crackdown by security forces.

More than 1,000 indictments have been issued for people identified as being leaders of what authorities have called “riots” in various provinces, according to the judiciary. Chief Justice Gholam-Hossein Mohseni-Ejei has ordered courts to fast-track cases.

Earlier this week, 227 of the 290 members of Iran’s parliament signed a statement read aloud at a public session that called for a response to people engaging in “moharebe” (literally meaning “waging war against God”) that would “teach an example”.

Several “rioters” were charged with moharebe in the first public court cases held earlier this month, which could potentially carry the death penalty.

Speaking to reporters on Tuesday, the judiciary’s spokesman, Masoud Setayeshi, also promised a response that would “teach an example and be deterring” to suspects.

Teenagers and young people have been arrested during the protests, but the exact number of the arrested – along with those who have been killed – is unclear. Setayeshi said a “handful” of school and university students and teachers have been arrested.

Setayeshi also said a “final decision” is near on the cases of Niloofar Hamedi and Elaheh Mohammadi, two women journalists working for local newspapers who were arrested after covering Amini’s death and her funeral.

They have been charged with “collusion with intent to act against national security” and “propaganda against the establishment” after Iran’s intelligence community earlier this month said they were trained by the CIA.

Earlier this week, the country’s tourism and culture minister, Ezatollah Zarghami, discussed the issue of teenagers’ arrest from the perspective of an interrogator whom he spoke with and who has interrogated people arrested during the “riots”.

“He [the interrogator] said I have interrogated major political people for a lifetime but my most difficult interrogations were of several hundred people arrested on the streets. Neither could I understand what they were saying, nor did they understand what I am saying,” he said.