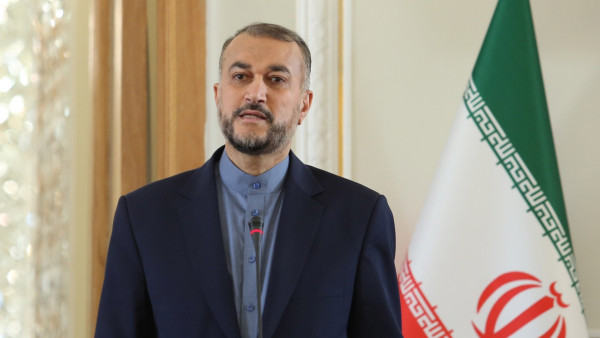 Iran's Foreign Minister has held talks with the head of the Jeddah-based Organisation of Islamic Cooperation, in a further indication that Saudi-Iran ties are warming.
The first talks in four years between an Iranian foreign minister and the head of the Saudi-based Organisation of Islamic Cooperation (OIC) took place on Monday, a sign of warming ties between Riyadh and Tehran.

The talks between an OIC chief and a leading Iranian official is seen as an important step in efforts to broker a reconciliation between Tehran and Riyadh.

The two countries broke off diplomatic ties nearly five years ago and the OIC has long been seen as a Saudi-dominated organisation.

Earlier this week, Iran and Saudi Arabia exchanged trade for the first time since diplomatic ties were cut.

Amir-Abdollahian expressed appreciation to Al-Othaimeen for helping Iran to re-open its representative office to the OIC in Jeddah. The office had been closed since 2017.

Tehran and Riyadh broke off diplomatic relations in 2016 after an angry backlash in Iran over the execution of Saudi Shia cleric Nimr Al-Nimr.

During talks with Al-Othaimeen, Amir-Abdollahian also warned that "extremist currents are one of the most important problems", for the OIC urging the organization to "play a more active role in Afghanistan".

This was in reference to an Islamic State suicide attack on Shia Muslim worshippers at an Afghan mosque last week which left dozens dead.

Al-Othaimeen condemned the attack, adding that is crucial for an inclusive government to be formed in Kabul that respects women's rights.

The country cannot be turned into a "safe place for terror groups", he said.

The OIC secretary-general said IS wants to spread "sectarian division in Afghanistan" and that the Islamic body "does not differentiate between those of different Islamic schools".

"All Muslims enjoy equal citizenship rights, and it is not permissible whatsoever to target Muslims and worshippers from any sect with terrorist attacks," he explained.

Tehran and Riyadh have held four rounds of reconciliation talks so far, with one of these under the new government of President Ebrahim Raisi, which was formed towards the end of August.