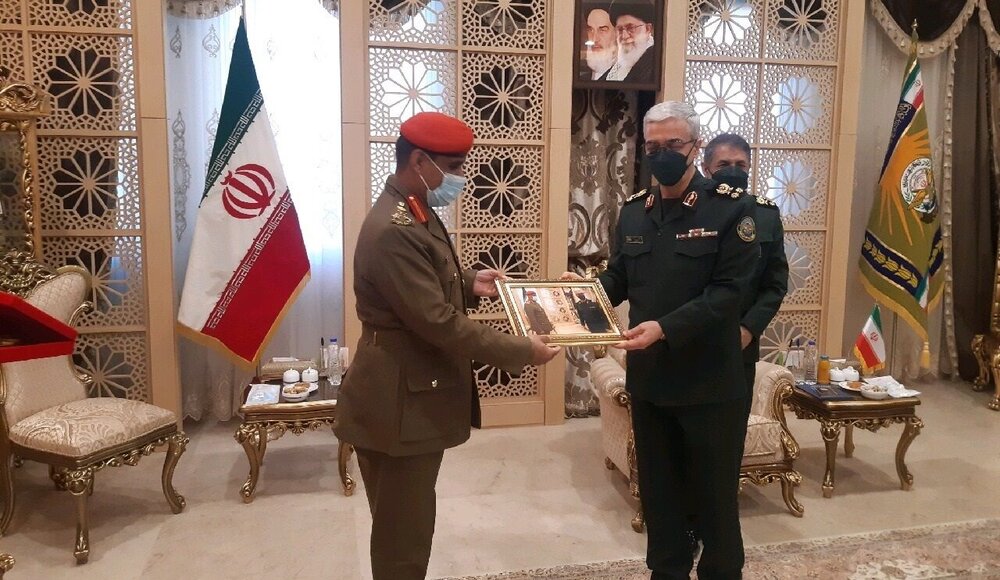 Iran’s Chief of Staff of the Armed Forces Major General Mohammad Bagheri announced on Monday that he has met with military officials from Saudi Arabia and the United Arab Emirates.
He made these remarks after his meeting with Oman's Assistant to the Chief of Staff for Operations and Planning Brigadier Abdulaziz Abdullah al-Mandhari, where they discussed developing military cooperation.

Abdullah al-Mandhari is heading a delegation in Iran to promote military and international cooperation.

Promoting training and military relations, fighting terrorism, and safeguarding the region without intervention of foreigners were on top of the agenda of the meeting.

After the meeting, Bagheri referred to the long-standing relations between the two countries, saying Iran’s strategy is to develop comprehensive relations with Oman, which is an “unchangeable policy”.

He added, “Oman has played a good role in mediating and calming the situation in coordination with Iran in all regional events and in communications and interactions, and this process is commendable.”

Iran and Oman have established good cooperation in maritime security, promoting security in the Sea of Oman, the Strait of Hormuz, the Arabian Sea, as well as the issues pertaining to the Yemen crisis and other regional events, the Chief of Staff of the Armed Forces added, suggesting this cooperation should be reinforced day by day.

He expressed hope that by holding these meetings, the relations of Iran’s Armed Forces with Oman will expand more and more.

The military chief stated that Iran’s Armed Forces are considered as an independent and self-reliant force in various military fields, given that they have been under sanctions for a long time.

Bagheri added, “The Armed Forces of the Islamic Republic of Iran are ready to cooperate with Oman in the fields of training, defense industry, health and engineering, and also to share their experiences in various fights against terrorism with the Armed Forces of Oman.”

He stated that the Armed Forces are also active in developing the country's economic infrastructure and are ready to take responsibility in the field of construction of various projects in Oman.

Referring to the de-escalation policy of Iran in the region, the top general said, “On regional issues, we have had meetings with officials of the Emirates and Saudi Arabia, and some misunderstandings have been cleared up. We also have good relations with Qatar and Kuwait.”

General Bagheri added that there is not much contact with Bahrain yet, and Oman can definitely play a role in this regard.

“The Islamic Republic is fully prepared to develop its relations with its neighbors and resolve misunderstandings when the new government is in office,” he stressed.

“We hope that Islamic countries have brotherly and friendly relations and that the previous disputes won’t lead to the abuse by foreigners,” the senior commander added.

Referring to the destructive effects of the presence of foreigners in the region, Bagheri said that Iran believes that the countries of the region have the full ability to establish security and defend their interests through cooperation,

The presence of foreign armies in the region will spread insecurity, he noted.

The military official added, “The Americans and Europeans know that the only way to stay in the region is to create discord and conspiracy between the countries of the region, and in this regard, they are acting in line with their own interests through Iranophobia and creating an illusion of threats from Iran.”

According to Bagheri, in this way, they create disputes to sell weapons, and in fact do not contribute to the security of the region.

“If these issues are solved, we will be able to establish security in the region with the cooperation and interaction of our neighbors,” he remarked.

The major general expressed surprise over the so-called normalization deals with Israel, saying, “The surprising point is that some countries in the south of the Persian Gulf have established relations with the Zionist regime. The enmity of the Zionist regime with the Islamic world and the Muslims of the region is not hidden from anyone, and establishing relationship, with the insistence of the United States and the conspiracies they are carrying out, will definitely lead to a troubled future for the region.”
Add Comment