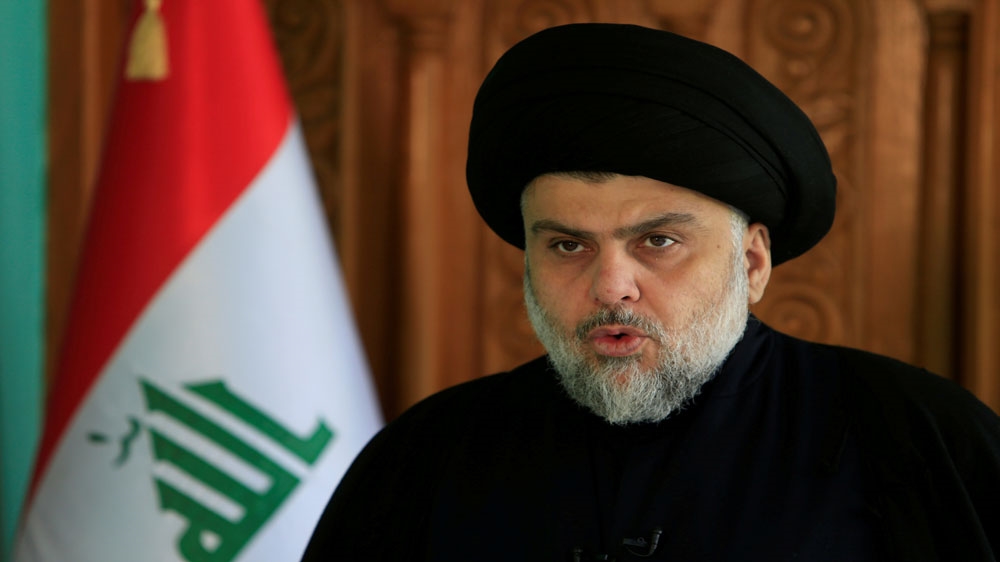 Muqtada al-Sadr says he ‘will not participate in the next elections if the corrupt participate’.

Iraqi Shia leader Muqtada al-Sadr said he has decided to withdraw from the political process to avoid involvement with “corrupt” politicians, the state news agency reported.

According to a report on Wednesday, the leader of the Sadrist Movement in the Iraqi parliament insisted he “will not participate in the next elections if the corrupt participate” during a closed meeting with members of his bloc.

He also said that his decision to order his bloc to resign from parliament will not be retracted, in an announcement that came three days after he ordered 73 politicians from his party to quit the assembly.

The unprecedented mass withdrawal of the al-Sadr bloc has dramatically altered the political landscape in Iraq, throwing government formation talks into further doubt.

It was a huge gamble by al-Sadr, one of the most influential politicians in Iraq with a large street following, putting him outside of parliament for the first time since 2005.

Al-Sadr emerged as the winner of the October vote, giving him 73 of parliament’s 329 seats. The vote was a blow to his Iran-backed Shia rivals who lost about two-thirds of their seats and have rejected the results.

Since then, the two sides have been locked in a competition for power, even as the country faces growing challenges, including an impending food crisis resulting from severe drought and the war in Ukraine.

Al-Sadr has been intent on forming, along with his allies, a majority government that excludes the Iran-backed factions.

But he has not been able to corral enough legislators to parliament to get the two-thirds majority needed to elect Iraq’s next president – a necessary step ahead of naming the next prime minister and selecting a cabinet.

When he ordered his politicians to resign on Sunday, he called it a “sacrifice” he was making for the good of the country.

His cousin and nominee for prime minister, Jaafar al-Sadr, withdrew his candidacy on Monday.

The surprise move was an attempt to break a persisting political impasse, eight months after general elections were held. The question has since been whether the political parties will be able to form a government with al-Sadr in the opposition.

According to analysts, the Sadrist Movement’s resignations will not spell an end to Iraq’s political crisis. Instead, the coming phase will likely bring more instability to the oil-rich country, with a possible new wave of intense debate, and potential street protests.

With the resignation of Sadrist politicians, Iranian-backed groups are now expected to hold the majority in parliament.

According to Iraqi laws, if any seat in parliament becomes vacant, the candidate who obtains the second-highest number of votes in their electoral district replaces them.

In this case, it would be al-Sadr’s opponents from the so-called Coordination Framework Alliance, a coalition led by Iran-backed Shia parties and their allies. Many of the seats vacated by the Sadrists will therefore be filled by the Shia parties in the CFA, such as former Prime Minister Nouri al-Maliki’s State of Law and the Fatah Alliance, the political wing of the Iran-backed Popular Mobilisation Forces, or Hashd, militia.