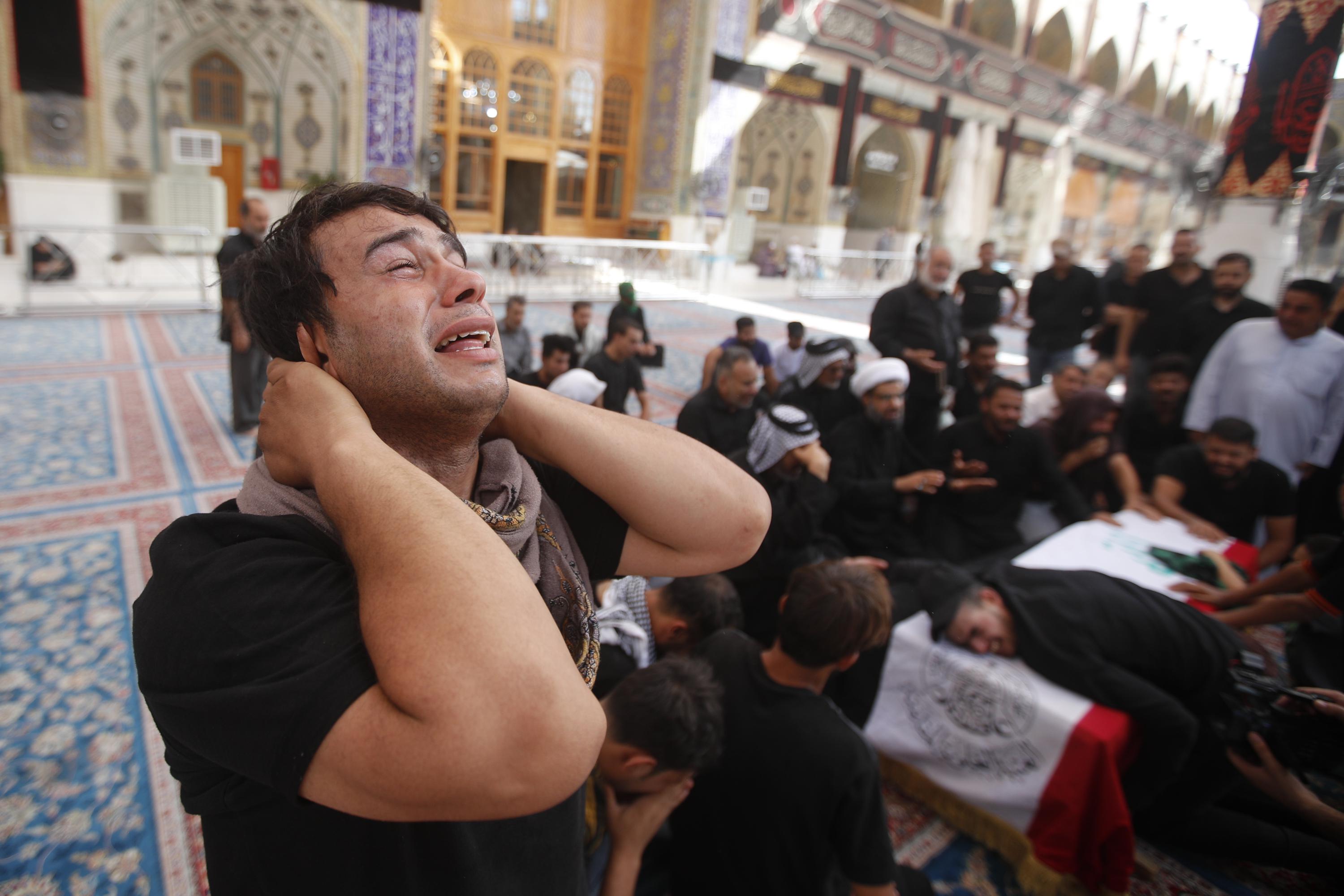 Armed supporters of a powerful Iraqi cleric who clashed with security forces in the capital began to withdraw from the streets Tuesday, restoring a measure of calm after a serious escalation of the nation’s political crisis.
Following two days of deadly unrest that sparked fears instability might spread throughout the country and even the region, cleric Muqtada al-Sadr, 48, told his supporters to leave the government quarter where they had rallied. Within minutes, some could be seen heeding the call, dismantling their tents and walking out of the area known as the Green Zone.

The cleric’s supporters packed up their belongings and trucks ferried away bundled up mattresses. Mounds of trash littered thoroughfares and the steps leading up to Iraq’s parliament building. A portrait of al-Sadr waving was placed against a tree as his followers rolled up carpets, tea glasses and the remnants of their four-week sit-in.

Iraq’s military also announced the lifting of a nationwide curfew, further raising hopes that the immediate crisis was ebbing, though the larger political crisis remained unresolved. Al-Sadr’s move to de-escalate tensions raised questions of how issues such as the dissolution of parliament and the holding of early elections will be handled between rival groups.

Iraq’s Prime Minister Mustafa al-Kadhimi, in a speech late Tuesday, threatened to vacate his post if the political crisis continues.

Protesters supporting al-Sadr’s rivals also withdrew from their demonstration outside the government zone.

Iraq’s government has been deadlocked since al-Sadr’s party won the largest share of seats in October parliamentary elections but not enough to secure a majority government. That led to months of political infighting between al-Sadr’s Shiite followers and his Iran-backed Shiite rivals before it became violent Monday.

The chaos began when al-Sadr announced he would resign from politics. Many dismissed the move as a ploy to gain greater leverage, and his supporters stormed the Green Zone, once the stronghold of the U.S. military and now home to Iraqi government offices and foreign embassies. They eventually breached the gates of the government palace, rushing into its lavish salons and marbled halls.

On Tuesday, his followers could be seen on live television firing both machine guns and rocket-propelled grenades into the heavily-fortified Green Zone, while security forces sporadically returned fire and armored tanks lined up. Some bystanders filmed the gunfight with their mobile phones, though most hid behind walls, wincing when rounds cracked nearby.

At least 30 people were killed, officials said, before al-Sadr urged those loyal to him to go home, following pleas for restraint from several Iraqi officials and the United Nations.

“This is not a revolution,” the cleric said in a televised address.

Al-Kadhimi said an investigative committee was formed to uncover who shot at al-Sadr’s supporters during protests Monday, “despite our clear and strict orders prohibiting the use of live ammunition.”

“It is also imperative to determine who opened fire and launched rockets and mortars on governmental institutions throughout the night,” he said in the speech. “Undisciplined groups will face legal consequences.”

Al-Sadr, who spurred his followers to storm the parliament in July with calls for revolution and reform, apologized to the Iraqi people and said he could not support the violence.

The immediate shift on the streets underscored his enduring control over his loyalists, and by extension his influence over the Iraqi political class.

In addition to the dozens killed, over 400 were wounded, two Iraqi medical officials said Tuesday. The officials spoke on condition of anonymity because they weren’t authorized to release the information to journalists.

In a sign of the fear that the unrest would spread, Iran closed its borders to Iraq earlier Tuesday, though even before al-Sadr’s order, streets beyond the capital’s government quarter largely remained calm. The country’s vital oil continued to flow, with global benchmark Brent crude trading slightly down.

Members of Iraq’s majority Shiite Muslim population were oppressed when Saddam Hussein ruled the country for decades. The 2003 U.S.-led invasion that toppled Saddam, a Sunni, reversed the political order. Just under two-thirds of Iraq is Shiite, with a third Sunni.

Now, the Shiites are fighting among themselves, with those backed by Iran and those who consider themselves Iraqi nationalists jockeying for power, influence and state resources.

It’s an explosive rivalry in a country where many are wary of the Iranian government’s influence even though trade and ties between people remain strong. Iraq and Iran fought a bloody war in the 1980s that saw a million people killed.

Al-Sadr’s nationalist rhetoric and reform agenda resonates powerfully with his supporters, who largely hail from Iraq’s poorest sectors of society and were historically shut out of the political system under Saddam.

Al-Sadr’s initial announcement that he would leave politics implicitly gave his supporters the freedom to act as they see fit. His speech on Tuesday, effectively reined them back in.

Before that, the unrest led neighboring countries to issue warnings to their citizens and one embassy closed.

In addition to closing its borders, Iran urged its citizens to avoid any travel to the neighboring country, citing the unrest. The decision came as millions prepared to visit Iraq for an annual pilgrimage to Shiite sites.

Kuwait, which shares a 254-kilometer- (158-mile-) long border with Iraq, called on its citizens to leave the neighboring country. The state-run KUNA news agency also encouraged those hoping to travel to Iraq to delay their plans.

The U.S. Embassy in Baghdad issued a security alert for U.S. citizens urging them to avoid the Green Zone and other areas where demonstrations are occurring as well as a Do Not Travel advisory.

“There are firefights around the embassy in Baghdad. Our staff are now working at the German embassy elsewhere in the city,” Hoekstra wrote.

Dubai’s long-haul carrier Emirates stopped flights to Baghdad on Tuesday. The carrier said that it was “monitoring the situation closely.” It did not say when flights would resume.
Add Comment