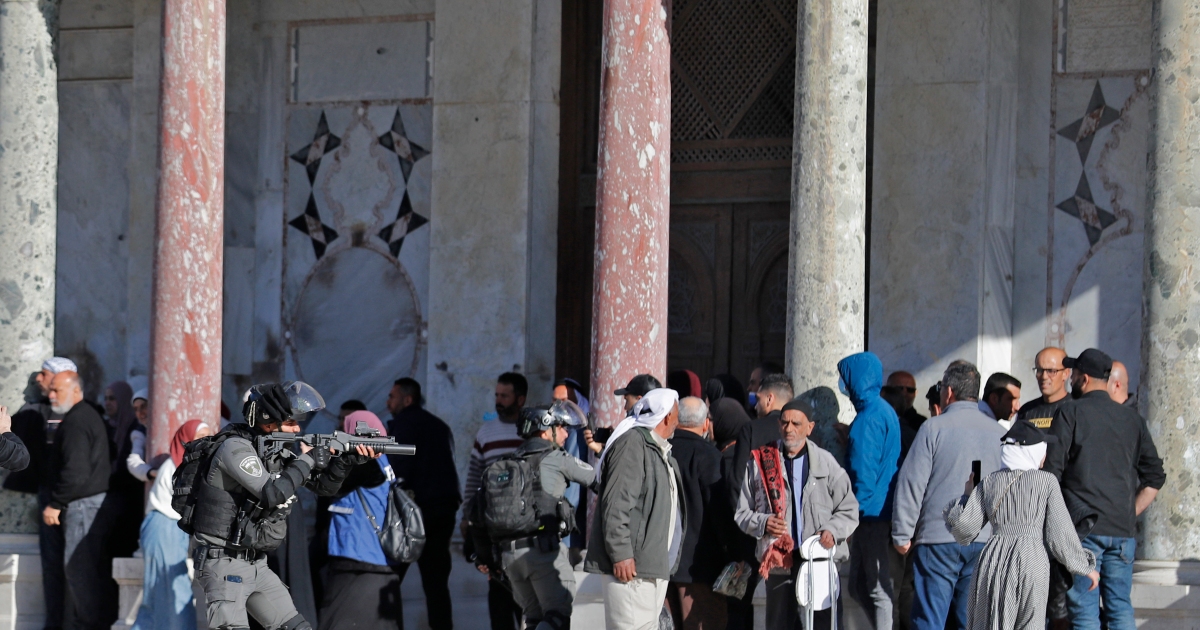 Hundreds of Palestinians detained after Israeli police entered the mosque compound before dawn.

Israeli forces raided the Al-Aqsa Mosque compound in occupied East Jerusalem with medics reporting at least 158 Palestinians injured in the ensuing violence as hundreds were detained.

The Islamic endowment that runs the site said Israeli police entered in force before dawn on Friday, as thousands of worshippers were gathered at the mosque for early morning prayers.

Videos circulating online showed Palestinians throwing rocks and police firing tear gas and stun grenades. Others showed worshippers barricading themselves inside the mosque amid what appeared to be clouds of tear gas.

It was the most serious violence at the holy site in nearly a year. Palestinians view any large deployment of police at Al-Aqsa as a provocation.

The Palestinian Red Crescent emergency service said it evacuated the majority of the wounded to hospitals. The endowment said one of the guards at the site was shot in the eye with a rubber-coated bullet.

The Palestinian Red Crescent added Israeli forces hindered the arrival of ambulances and paramedics to the mosque, as Palestinian media said dozens of injured worshippers remained trapped inside the compound.

Israeli police said they arrested at least 300 Palestinians during the latest escalation. However, Palestinian sources put the number at 400. Three officers were wounded from “massive stone-throwing”, it said.

Israeli police said they entered the compound, the third holiest site in Islam and revered by Jews as the Temple Mount, to break up a “violent” crowd that remained at the end of the morning prayers.

They went in “to disperse and push back” the crowd after a group of Palestinians began throwing rocks towards the nearby Jewish prayer space of the Western Wall.

“There were many injured people, they fired rubber bullets inside Al-Aqsa Mosque compound. They were beating everyone, even the paramedics, they hit them,” said al-Khatib, who suffered a broken hand.

Neighbouring Jordan, which has custodianship over the holy site, and the Palestinian Authority issued a joint statement accusing Israel of “a dangerous and condemnable escalation that threatens to explode the situation”. Egypt also condemned the “Israeli raid”.

Israel’s public security minister, Omer Barlev, who oversees the police force, said Israel had “no interest” in violence at the holy site, but that police were forced to confront “violent elements” who attacked them with stones and metal bars. He said Israel was committed to freedom of worship for Jews and Muslims alike.

The mosque was later re-opened and some 60,000 people attended the main Friday prayers midday, according to the Waqf, the Islamic endowment that administers the site.

After prayers, thousands of Palestinians marched around the esplanade chanting “with our souls, with our blood, we sacrifice for you, Al-Aqsa”, in addition to slogans in support of Hamas.

She added the escalation came as far-right Jewish groups called for raids of the Al-Aqsa Mosque compound during the Jewish Passover holiday, and the offering of animal sacrifices in its courtyards, which has not occurred since ancient times.

“Simply seeing Israeli police actually inside the Al-Aqsa Mosque with men laying face down on the carpet, hearing the bang-bang of stun grenades, seeing the cloud of tear gas, seeing distressed Palestinians being carted outside of the compound after being injured … deeply outraged and upset Palestinians,” she said, speaking from outside Damascus Gate.

Al Jazeera’s senior political analyst Marwan Bishara blamed the Israeli occupation, the “international community’s indifference to Palestinian suffering” amid the Ukraine crisis, and the “paralysis of the Palestinian leadership” as reasons behind the latest developments in Jerusalem. 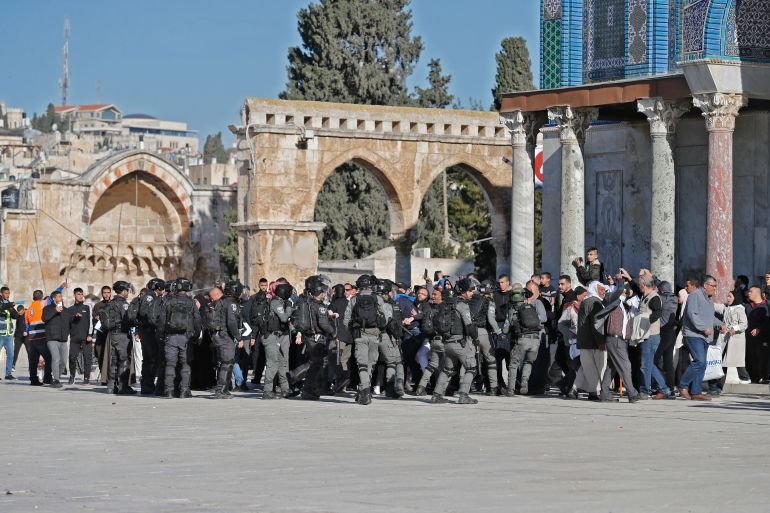 Responding to the developments, the Palestinian presidency said in a statement the storming of Al-Aqsa Mosque compound by Israeli police was “a dangerous development” and “a declaration of war”.

It added the Palestinian people would not allow Israeli occupation forces and Jewish settlers to take over the holy site, and called on the international community to “end Israeli aggression”.

Ismail Haniyeh, head of the political bureau of Hamas that governs the Strip, said the Palestinian people would defend and protect Al-Aqsa Mosque at all costs. He added there was no place for “intruders” in Jerusalem.

Hamas also called on the Palestinians in the occupied West Bank and Israel to unite in support of Jerusalem and the Al-Aqsa Mosque.

Ofir Gendelman, a spokesman for Israeli Prime Minister Naftali Bennett, said Israel would not allow those he described as “rioters” to hinder prayer in Jerusalem and disrupt public order.

Gendelman accused “Palestinian thugs” of throwing stones without pretext with the aim of inflaming the situation in Al-Aqsa Mosque. He said Israeli police were forced to enter the compound to disperse the crowds and calm the situation.

Tensions have escalated in recent weeks. Israel has been carrying out arrests and military raids in the illegally occupied West Bank in the wake of a series of deadly attacks by Palestinians inside Israel, setting off clashes in which several Palestinians have been killed, including seven since Wednesday.

Tens of thousands of Palestinians were expected to gather at Al-Aqsa for Friday afternoon prayers as Muslims observe the holy month of Ramadan.

Weeks of protests and raids on Al-Aqsa during Ramadan last year escalated into an 11-day assault on the besieged Gaza Strip.

The war led to the deaths of at least 260 Palestinians, as well as 13 Israelis, and significant destruction in the already impoverished territory.

Ramadan this year coincides with the Jewish Passover holiday and Christian holy week, bringing thousands of pilgrims and other visitors to Jerusalem.

Al-Aqsa has been a major flashpoint for Israeli-Palestinian violence for decades and was the epicenter of the 2000-2005 Palestinian intifada, or uprising.

Israel captured East Jerusalem, including the Old City, in the 1967 war and annexed it in a move not recognised internationally. Palestinians want the eastern part of the city to be the capital of a future state including the West Bank and Gaza, which Israel also captured during the war. 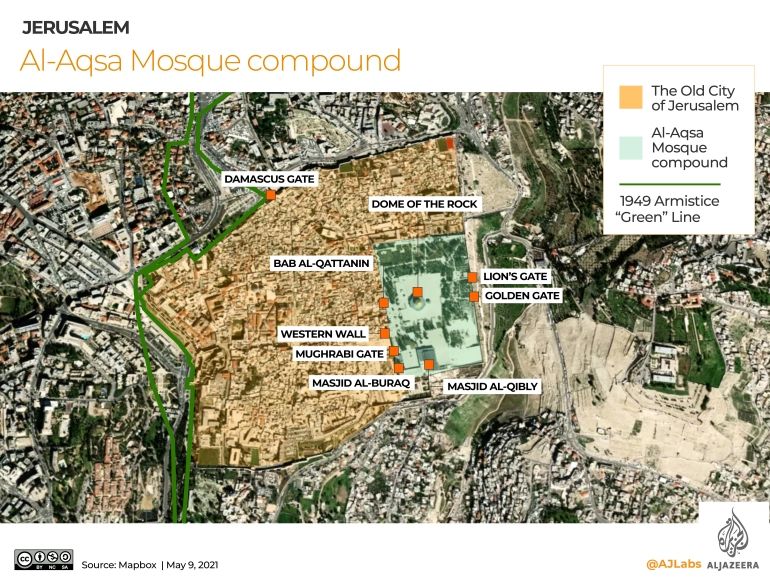