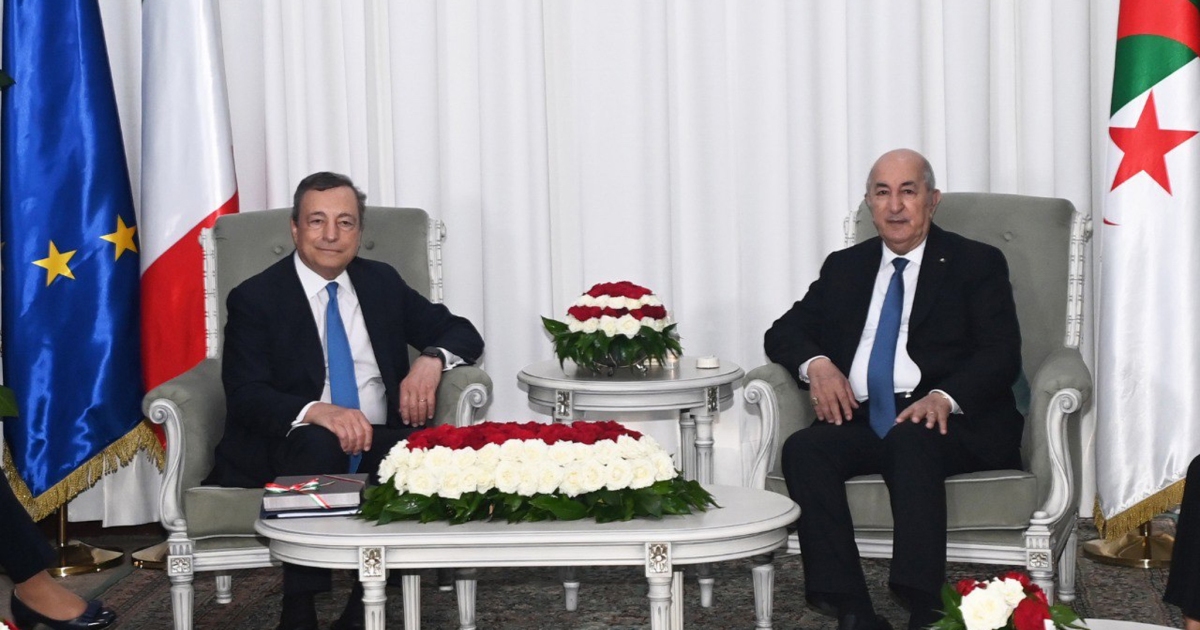 The Italian government has sealed a series of agreements with Algeria, as European countries ramp up their push to disengage from Russia after it invaded Ukraine and secure alternative energy supplies.

A major deal finalised on Tuesday sees a clutch of energy companies including Italy’s Eni invest $4bn in a site located in the perimeter of Berkine to produce one billion oil equivalent barrels.

During a visit to Algiers as part of the fourth Italy-Algeria intergovernmental summit, Italian Prime Minister Mario Draghi and Algerian President Abdelmadjid Tebboune on Monday signed 15 agreements and memorandums of understanding in areas ranging from energy to sustainable development, justice and micro-enterprises.

“Algeria is a very important partner for Italy, in the energy sector, in the industry and business fields, in the fight against criminality, and in the search for peace and stability in the Mediterranean,” said Draghi, noting that the North African country has “become in recent months the biggest supplier of gas” to his country.

The agreements are “fundamental for the European Union as well as Italy” and “a testament to our determination to achieve even more in this domain,” he added.

Sonatrach also announced the upcoming supply of four billion cubic metres of gas to Italy, as part of the agreement signed with Eni in April.

Italy buys the majority of its natural gas from abroad, with some 45 percent of its imports historically coming from Russia. Algeria is Africa’s biggest gas exporter and supplies some 11 percent of the natural gas consumed in Europe.

Rome has increasingly looked to Algeria, historically its second biggest supplier, to reduce that dependence after the war in Ukraine sparked sanctions against Russia and sent energy prices soaring.

Draghi previously visited Algiers in April, when he concluded a deal to progressively increase deliveries through the Transmed pipeline by up to nine billion cubic metres per year in 2023-24.

The Italian government plans to have the country’s gas storage system filled to at least 90 percent of its capacity by November, in line with a European Union-wide target.

Fear of a Russian cut-off

European leaders have also ramped up their push to secure alternative energy supplies, as fears escalate of a complete natural gas cut-off by Russia.

France and the United Arab Emirates on Monday signed an agreement on energy cooperation to ensure oil and natural gas supplies from the Gulf country. The French economy ministry did not release details on the deal as President Emmanuel Macron hosted Sheikh Mohamed bin Zayed Al Nahyan in Paris.

The same day, EU Commission President Ursula von der Leyen was in Azerbaijan to clinch a deal with President Ilham Aliyev on increased gas supplies from the former Soviet republic.

With the tentative agreement, the EU wants to double its gas imports from Azerbaijan within half a decade. The bloc said the agreement also has guarantees for green energy supplies.

“This is good news for our supplies of gas this winter and beyond,” von der Leyen said.

The 27-nation EU now is bracing for the possibility of a complete Russian cutoff of natural gas that powers industry, generates electricity and heats homes in winter.

There are fears that Nord Stream 1, a major pipeline between Russia and Germany that closed for scheduled maintenance last week, will not be restarted in retaliation for sanctions over the war.