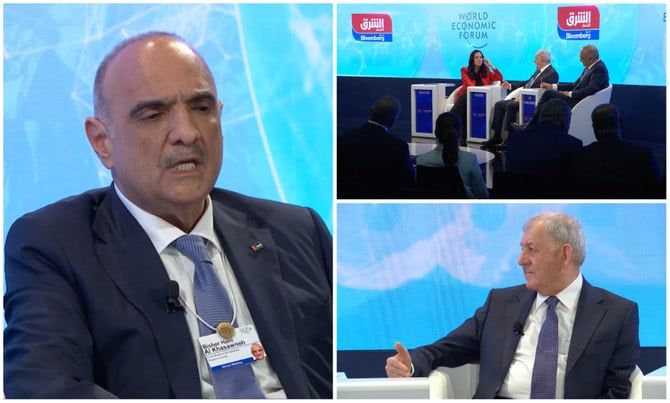 The leaders of Jordan and Iraq have called for deeper Arab collaboration in the energy, agriculture and oil sectors to achieve regional prosperity.
Speaking at the World Economic Forum in Davos on Thursday, Iraq’s President Abdulatif Rashid and Jordan’s Prime Minister Bisher Hani Al-Khasawneh said the Amman-Baghdad-Cairo mechanism would benefit the broader regional economy.

Rashid said that after years of wars, civil conflicts and terrorism, Iraq was ready to embark on a new journey of achieving peace and stability at home, while contributing to a better reality for the region.

He pointed to an “optimistic” outlook if the Middle East was “able to solve its conflicts without foreign interference.”

The newly formed Iraqi government planned to increase oil, gas and agriculture projects to help advance the regional economy, which has been reeling from the impact of the COVID-19 pandemic and rising inflation, he added.

But Iraq needed “regional cooperation and some international help in terms of investment and contracts,” Rashid said.

“We get most of our water from neighboring countries. In many cases, we share oil fields with Kuwait, Iran and other countries. We don’t have many ways but to cooperate along these lines, but in Iraq, we are lucky to have agriculture, tourism, oil fields and gas.”

Al-Khasawneh said the war between Ukraine and Russia had “reinforced beliefs in Jordan that the key to progress rests upon the foundation of collective action.”

But, he said, the region suffered from a serious deficiency in inter-Arab trade, which “does not exceed 13 percent of the total volume of Arab countries’ trade.”

“All synergies are fundamental and essential to the advancement of the economies of the region and in dealing with the challenges that respective countries face,” he added.

Al-Khasawneh said that the Amman-Baghdad-Cairo mechanism “does not exist in the void, and it’s open to all interested parties in the region.”

The mechanism essentially focuses on building an industrial zone on the Jordanian-Iraqi border and establishing a pipeline to carry oil and gas from Iraq to the borders of Jordan and Egypt.

Al-Khasawneh said that for a country that lacked natural resources, building on its human capital and establishing ties with neighboring countries in the region had been essential to achieving Jordan’s national objectives.

Due to collaborations with the International Monetary Fund and other regional and international institutions, the country had been able to keep its inflation rate at 4.2 percent, which, according to Al-Khasawneh, was a “low number compared to neighboring countries with the exemption of those with natural resources.”

The Middle East was interconnected and needed to prioritize work for the stability of populations, he said.
#COVID-19  #Covid
Add Comment