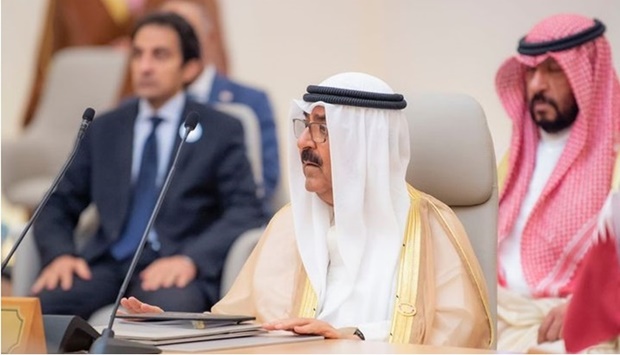 Kuwaiti Crown Prince Sheikh Meshaal al-Ahmad al-Jaber al-Sabah said Saturday that the Gulf Co-operation Council (GCC) countries and the United States share historical relations, deep ties and common strategic interests, especially in light of the exceptional circumstances and challenges facing the region.
In a speech during the Jeddah Security and Development Summit, the Kuwaiti crown prince added that the political, economic and security challenges are multiple and accelerating, and require more consultation, co-ordination, co-operation and understanding to face them by building clear and public perceptions in pursuit of our common goals and to strengthen the requirements of security and stability in the region.

Sheikh Meshaal expressed his wishes for the summit to be the beginning of a new start to address the issues of the region that have taken many decades, especially the Palestinian issue, calling for the success of the permanent and comprehensive peace process in accordance with the resolutions of international legitimacy and the Arab Peace Initiative and supporting the right of the Palestinian people to establish their independent state with East Jerusalem as its capital.

He praised the efforts of the Presidential Leadership Council and the entities supporting it, stressing full support for their efforts towards achieving security and stability in Yemen.

He highlighted that Kuwait hopes that concerted efforts will be made to address the tragic situations in the region, in particular the developments in Iraq, Syria, Libya, Lebanon and Afghanistan, and other regional issues that continue to cast a shadow on the stability of regional and global security.

Regarding the Russian-Ukrainian crisis, the Kuwaiti crown prince underlined his country's principled position based on international law and the UN Charter, respect for international law based on respect for the sovereignty, territorial integrity and political independence of states, non-interference in their internal affairs and non-use or threat of force.
#Afghanistan
Add Comment