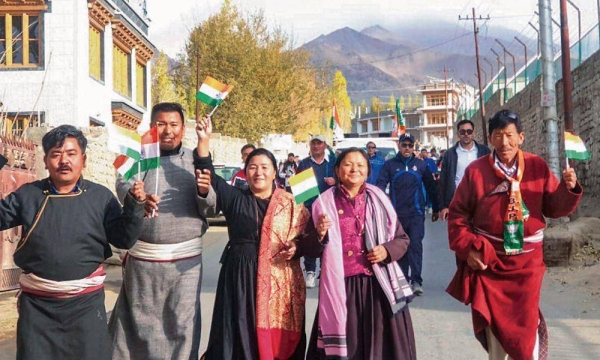 Ladakh, declared a Union Territory on Aug. 5 by the Indian government, is seeing increased development as New Delhi has implemented several development projects that aim to build a clean, green, healthy, and wealthy Union Territory of Ladakh.
The people of Ladakh had sought UT status way back in 1949 in order to address the development needs of the area, and their wish was finally granted in 2019, according to a WION report.

Work on infrastructural projects like roads and tunnels has gained pace. Even the remotest border villages are now being connected to the telephone network and the Internet through fiber-optic cables powered by solar electricity generation units.

While notable progress has been made in all spheres impacting public life, the UT administration has chalked out an ambitious plan for ensuring the all-around development of the region and its people.

Several development projects have been kick-started by the government including the Alusteng-Drass-Kargil–Leh transmission system, which was completed in February last year. The move helped Ladakh to be linked to the national grid ensuring an uninterrupted reliable, quality power supply to the region.

In February 2019, Indian Prime Minister Narendra Modi had inaugurated the Dah hydroelectric project and had dedicated the 220 KV transmission for overall electrification.

Approximately, Rs.60 billion has been allocated for the development of Ladakh for the fiscal year 2020-21. Nine projects with an outlay of Rs.214.4 billion were transferred to the UT of Ladakh.

The Colonel Chewang Rinchen Bridge has been constructed by the Border Roads Organization (BRO) in a record time of 1 month, which provides all-weather connectivity in the region.

In addition, 82-meter Span Motorable Bridge over River Shayok at Rongdo in Nubra has been opened for the public. The Ladakh administration has formulated new rules under which jobs would be reserved exclusively for locals.

A 255 Km long all-weather Darbuk-Shayok-Daulat Beg Oldie road in Galwan Valley has been constructed to enable year-round connectivity between Karakoram Pass and Leh, according to Zee News.

India's Renewable Energy Ministry has drawn up plan to scale a 23,000 MW grid connecting the mega solar project in Ladakh with a 7,500 MW package forming the first part of a larger project.

India's prime minister had also inaugurated a plan for the first central university in Ladakh with a Center on Buddhist Studies helping over 10,000 Ladakhi students.

Modi had also vowed to make Ladakh a carbon-free region in the coming years with the start of the Ladakh Greenhouse project targeted to increase the availability of vegetables throughout the year.

"Cultural tourism" which is one of the key development planks for the area has been given a boost with homestay at monasteries along with eco-tourism and ecological activities like bird watching, wildlife safaris.

In November 2020, Ladakh rolled out its first tourism incentive policy with a focus on ensuring equitable and sustainable development of all regions in the union territory.

Indian Defense Minister Rajnath Singh, meanwhile, assured making functional the Siachen Glacier for tourists, opening some more border villages for tourism, construction of strategic roads, development of border villages, and movement of Nomads for grazing in the areas located close to the Line of Actual Control (LAC) in Ladakh.

The Ministry of Culture and Tourism has planned to further develop facilities for tourists at regular intervals on 230 km of the highway between Leh and Kargil. With this, the journey from Leh to Kargil will be smooth and pleasant.

Additionally, a hill station, more enchanting than the world-famous Davos in Switzerland, is being planned in the picturesque landscape between the 18-km stretch of Zojila tunnel in Ladakh and Z-Morh tunnel in Jammu & Kashmir.

The Indian federal government approved on Sept. 23, 2019, the establishment of a new medical college in Leh district of the newly created Ladakh Union Territory, following receipt of requests from the locals about improving healthcare facilities in the Himalayan region.

The medical college in Leh is expected to ‘revitalize health and medical education in the region and has been received very well by the people of Ladakh.
Add Comment