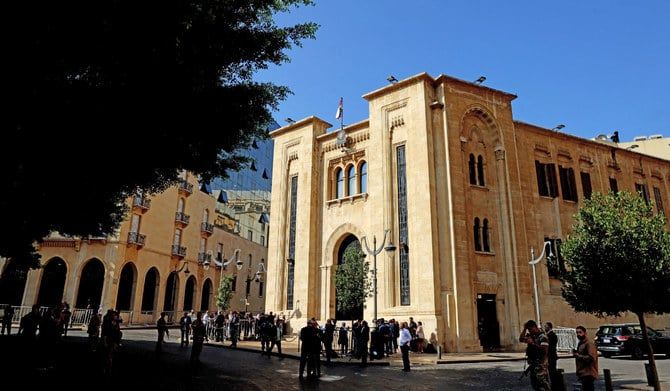 Lebanon’s prosecutor general Judge Ghassan Oueidat charged Mount Lebanon Public Prosecutor Judge Ghada Aoun on Monday with “spreading false news, violating job duties, inciting sectarian strife, inciting conflict between the nation’s components, humiliation, slander and abuse of power.”
It is the first allegation of its kind made by the judiciary against a member of the judicial body in Lebanon.

Aoun’s opponents accuse her of showing bias in favor of the Free Patriotic Movement and former president Michel Aoun, and following the faction’s orders to prosecute Banque du Liban Gov. Riad Salameh and officials in the banking sector on corruption charges.

She claimed that the figures smuggled tens of billions of dollars combined into Swiss bank accounts.

She captioned the photo: “I do not know how valid this information is, but why don’t the people whose names appear on this list reveal their accounts with Swiss banks for the sake of transparency only?”

The list did not include the name of any individual in the faction to which she is affiliated — the FPM.

Aoun’s tweet provoked angry reactions, with activists revealing that the list had previously been published by WikiLeaks but did not contain factual information.

Activists accused Aoun of undermining the legal profession by publishing information without fact-checking.

Aoun deleted the post the same day, tweeting: “I did not accuse anyone. The list had been shared in the media; I was not the first to post about it.

“In any case, if any public prosecution receives this information, it is its duty to open an investigation. No investigation was conducted in this regard, although everyone knows that many did transfer money abroad, regardless of the amounts.”

Aoun’s initial tweet, however, prompted Berri and his wife to file a legal complaint against the judge.

Oueidat listened to the testimony of Berri’s attorney, Ali Rahal, who reiterated his complaint against Aoun.

But Aoun did not appear before Oueidat and quickly filed a complaint against him before the Civil Court of Cassation.

Oueidat referred a copy of the claim to the Judicial Inspection Board.

A judicial source told Arab News: “This procedure means that the Judicial Inspection Board is the one who is trying Aoun and may expand the investigation, but the board is now paralyzed in light of the dispute over the appointment of its members between the Supreme Judicial Council and the government.”

The judicial source added that it is the first time that a charge of this kind has been made against a judge, noting that many judges have previously been charged with violating their job duties and were referred to the Judicial Inspection Board and the Disciplinary Council for investigation.

Aoun’s legal representative, Pascal Fahd, said: “Judge Aoun did appear before Oueidat but submitted a complaint because there was a conflict of interest with Oueidat, in addition to his lack of jurisdiction in this case.”

Berri’s attorney said: “The lawsuit is legal, and we are determined to proceed with it. She offended their dignity and we will not back down. Her failure to appear before Oueidat is proof that she is guilty.”

Former general prosecutor Hatem Madi said that like all judges, Aoun enjoys immunity, with only Lebanon’s prosecutor general able to override it, after which they can take appropriate action.

“If he refers her to the Judicial Inspection Board, she can still have immunity, but the prosecution against Aoun means lifting her immunity,” said Madi.

Investigation and prosecution procedures are carried out in accordance with Article 344 and the Code of Criminal Procedure, added Madi.

He added: “However, this was not an isolated incident, but rather a part of a political agenda that uses the judiciary as a tool for personal interest, which I have been subject to before and it only made me stronger.”

Siniora said that Aoun “has become known for such actions, and the judiciary’s silence in this regard has become a sinister scandal.”

He added that President Aoun’s term had ended but his “shameful interventions” were sure to follow, especially in light of Judge Aoun’s actions.

Siniora stressed: “I will not defend myself against a frivolous, fabricated accusation.”

In 2019, Judge Aoun accused caretaker Prime Minister Najib Mikati of profiting from illegal gains against the backdrop of a subsidized loan scandal that was intended to allow Lebanese citizens to buy homes.

The accusation was also leveled against Mikati’s son and brother, as well as Bank Audi.

Aoun was subjected to disciplinary measures at the time by Oueidat, who requested Lebanon’s security services to stop referring cases to her.

In 2019, Aoun issued a decision to arrest Hoda Salloum, a director in the Road Traffic Department, on corruption charges. The accusations were also aimed at former MP Hadi Hobeich.

Backed by FPM supporters, Aoun stormed the offices of Mecattaf Holding Group to press charges relating to the transfer of funds abroad.

She has been removed from overseeing several prominent cases due to lawsuits, but in some cases refused to comply and continued working.