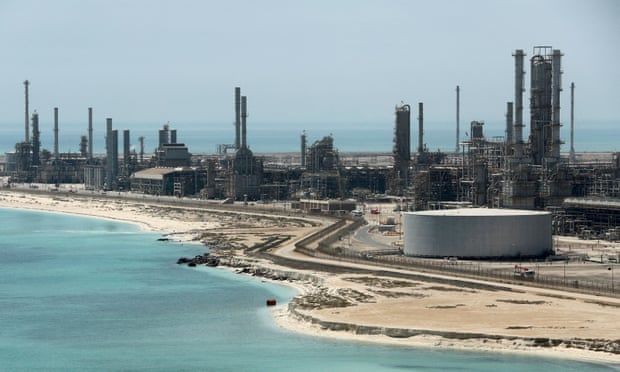 IMF says it expects region’s oil and gas exporters to benefit from high prices over next four years
Middle Eastern states are to land a $1.3tn (£1.09tn) windfall from extra oil revenues over the next four years, according to the International Monetary Fund.

The IMF said on Friday it expected oil and gas exporters in the region, notably the Gulf states, to benefit from high prices and opportunities to ramp up their market share.

The oil and gas sector is in flux after Russia’s invasion of Ukraine, which has upended markets and sent prices soaring. Russia has increased exports of oil to Asian nations, while Vladimir Putin’s tactic of limiting gas supplies into Europe has left countries seeking new supply sources.

Jihad Azour, the IMF’s director for the Middle East and north Africa, told the Financial Times that countries in the Middle East could expect to receive $1.3tn more in cumulative revenues than was forecast before the invasion of Ukraine.

He said Gulf states needed to use the windfall to “invest in the future”, including efforts to switch towards greener energy sources. “It’s an important moment for them to … accelerate in sectors like technology [domestically] as this is something that will allow them to increase productivity,” Azour said.

“In addition, their investment strategy could benefit from the fact that asset prices have improved for new investors, and the capacity to increase their market share in certain areas are also opportunities.”

Gulf states are expected to spend the proceeds of the oil boom on building huge infrastructure projects, as well as investing overseas.

Azour said: “What is going to be really important is how they [Gulf states] manage this new cycle and how they maintain, at the same time, the benefits of the additional liquidity and the policies that will not lead them into pro-cyclicality.”

Last weekend, Saudi Arabia’s largely state-owned energy firm, Saudi Aramco, underscored the colossal profits made by gas- and oil-rich countries during the energy crisis by revealing that profits in the three months to the end of June jumped 90% to $48bn.

It is one of the largest quarterly profits in corporate history and represents a fillip for PIF, a backer of the company. PIF, chaired by the crown prince, Mohammed bin Salman, invested more than $7.5bn in US stocks in the second quarter of the year, including Amazon and PayPal.

The energy crisis shows little sign of easing, after the Russian state gas company, Gazprom, warned this week that European gas prices could soar by 60% to more than $4,000 per 1,000 cubic metres this winter.

On Friday, Wolfgang Kubicki, the vice-president of the German parliament, said Germany should allow the blocked Nord Stream 2 (NS2) pipeline to begin pumping Russian natural gas so “people do not have to freeze in winter and that our industry does not suffer serious damage”. There are fears of blackouts in Germany this winter as the country faces the prospect of a potential recession.

Ukraine’s foreign minister, Dmytro Kuleba, rebuked Kubicki, likening politicians’ demands to temporarily switch the pipeline on to a “drug addiction”. He said: “Calls by some German politicians to launch NS2 for a little while and close it later are totally irrational.

“This resembles drug addiction, when a person says: ‘Just one last time!’ without realising the devastating consequences of each ‘last time’. Addiction to Russian gas kills!”

The extent of the energy crisis in Britain is expected to be laid bare on 26 August when Ofgem sets the next industry price cap, which will be implemented in October. The cap is expected to rise from £1,971 to £3,582.
Add Comment