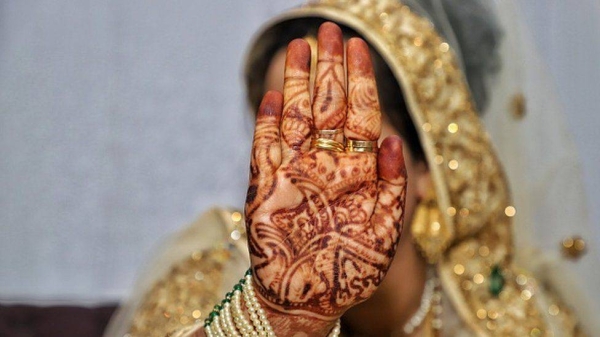 A 28-year-old Muslim woman's petition to a court, seeking to prevent her husband from taking another wife without her written consent, has put the spotlight on the practice of polygamy among Indian Muslims.
Reshma, who uses only one name, also wants the Delhi High Court to order the government to frame laws to regulate the "regressive practice" of bigamy or polygamy.

According to court documents, she married Md Shoeb Khan in January 2019 and in November next year, the couple had a baby.

Reshma accuses her husband of domestic violence, cruelty, harassment and dowry demands. He has levelled similar allegations against her.

She also says that he's abandoned her and their baby and he plans to take another wife.

Describing his action as "unconstitutional, anti-sharia, illegal, arbitrary, harsh, inhuman and barbaric", she says "this practice needs to be regulated to curb the plight of Muslim women".

While the court dwells on their acrimonious relationship and the legality of polygamy, the case has stirred a debate on the practice which is illegal in India except among Muslims and some tribal communities.

About 2% of the global population lives in polygamous households, according to Pew Research Centre's 2019 report. The practice is banned in much of the world, including in Muslim-majority countries such as Turkey and Tunisia, and is extensively regulated in most countries where it is allowed. The UN has described it as "an inadmissible discrimination against women" and called for it to "be definitely abolished".

But in India, the issue is a political hot potato. Prime Minister Narendra Modi's Hindu nationalist Bharatiya Janata Party (BJP) has promised to enact a Uniform Civil Code (UCC) - a contentious piece of legislation that will mean marriages, divorces and inheritance will no longer be governed by their religious law but will come under a common law applicable to all citizens.

And at a time when the country is highly polarised along religious lines, any reform suggested by the government is bound to be considered an onslaught on Islam by a majority of Muslims.

SY Qureshi, former chief election commissioner and scholar of Islam, says in India, "the general perception is that every other Muslim has four wives" and that they have numerous children which will eventually lead to Muslims outnumbering Hindus, but that is not true. (Only 14% of India's 1.3 billion people are Muslims while Hindus make up 80% of the population.)

Muslim men in India are allowed to marry up to four women and the sanction for polygamy, he says, comes from Qur’an, but it's permitted only under "strict conditions and restrictions" which are almost impossible to fulfil.

"The Qur’an says that a man can take a second or a third or a fourth wife from among orphans and widows and that he must treat them all equally. Anything else is a violation. But loving equally is almost impossible in practice. It's not just about buying them same clothes, it is much more than that," he adds.

The guidance on polygamy, Mr Qureshi says, was included in the Quran in the 7th Century amid tribal warfare in Arabia when a lot of men died young and polygamy was meant to help widows and orphans. "Otherwise, Quran actually discourages the practice and looks down upon it."

Critics such as women's rights activist Zakia Soman say that today there's no war in India and polygamy - a "misogynistic and patriarchal" practice - must be banned.

"How can you say that one man can have more than one wife? The community has to move ahead with the times. In today's day and age, it's a gross violation of a woman's dignity and human rights."

In 2017, the BMMA surveyed 289 women who were in polygamous relationships and queried them about their physical, mental, emotional and financial status. They have released a report chronicling 50 cases.

"We found that they were trapped in situations that were hugely unjust and for all of them, it had been a traumatic experience and many had developed mental health issues," Soman says.

The BMMA, which had earlier campaigned extensively against the controversial practice of instant divorce in Islam until it was banned a few years back, petitioned the Supreme Court in 2019, calling for a ban on polygamy.

There are other legal challenges too, including one by Ashwini Kumar Dubey, a lawyer and leader of India's governing Bharatiya Janata Party (BJP).

This has led to accusations from conservative Muslims that it's an interference in their religion.

"In Islam, laws are divine, we look up to the Qur’an and Hadith for directions. No man has the right to change what was made lawful by Allah," says Dr Asma Zohra, head of the women's wing of the All India Muslim Personal Law Board (AIMPLB) which is opposing Dubey's petition in court.

Polygamy among Muslims, she says, is "rare and a non-issue" and accuses the BJP of pursuing a "majoritarian agenda to dictate to the minority community".

"Have you ever come across a Muslim man who has four wives? In the year 2022, most men say it's hard to support one wife, leave alone supporting four. And the rate of polygamous marriages is the least in the Muslim community."

Her assertion is based on the data that found polygamy prevalent amongst all religions - a survey based on the sample size of 100,000 marriages by the Census of India in 1961 showed polygamy among Muslims to be 5.7%, the lowest among all communities.

The subsequent Census have been silent on the issue and most recent data on polygamy comes from the National Family Health Survey (NFHS-3) of 2005-06 which shows a steep decline in the numbers for all religions:

"Since this data is quite outdated, we have to look at the trends. So if we analyse the Census data from 1930 to 1960, there was a consistent decline in polygamy among all communities and in each decade, it was lowest among the Muslims," says Mr Qureshi, adding that the NFHS study is the only exception.

In his 2021 book The Population Myth: Islam, Family Planning and Politics in India, Mr Qureshi calls on the Muslim community to demand a ban on polygamy. "If it's not practised widely, then what do you have to lose by a ban?" he asks.

The reason for that, Dr Zohra says, are religious - and political.

"It's people saying Muslims are so rigid, but the provision is in the holy book and no-one can change that. Many tribal communities in the north-east have multiple wives and no-one targets them, then why do you target us? It's part of Islamophobia."

All this talk of a ban on polygamy, she says, is an attack on the community, an "interference in their personal religious laws".

Ms Soman agrees that at a time when the country is polarised along religious lines, Muslims are suspicious of the BJP government's intentions.

But, she says, that "if we don't set our house in order, others will come and do it - and they may have an agenda".

"But polygamy is a practice which, in the end, is violative of women's rights and it must go."
Add Comment