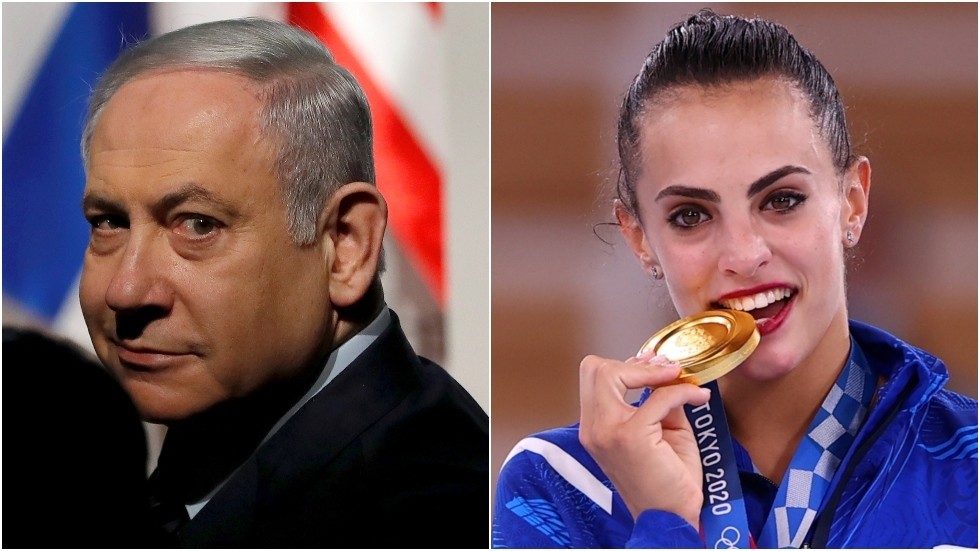 Israeli opposition leader Benjamin Netanyahu was attacked by his own right-wing allies, who accused him of disrespecting the Shabbat tradition barring Jews from working on Saturday by greeting the country’s Olympic champion.

Rhythmic gymnast Linoy Ashram became just the third Olympic gold medal winner in Israel’s history, after beating Russia’s Dina Averina for the title in a controversial decision by the referees in Tokyo on Saturday. The Israeli dropped her ribbon, which is considered a grave mistake in the discipline, but was still placed first, to the shock of the Russian delegation, experts, and fans.

Netanyahu, who became the leader of the opposition in the Knesset after being removed from the prime minister’s post in June, saw the compatriot’s sporting success as his own PR opportunity. He called Ashram the same day to congratulate her, and posted the video of that conversation on social media a few hours later. Apparently, he wanted to do it ahead of his rival, the current PM, Naftali Bennett, who is known as a religious person and strictly follows the Shabbat.

But the move didn’t land well with the Orthodox Jewish parties in Netanyahu’s own opposition bloc. Their condemnations started pouring in as soon as the night descended upon Israel, as Shabbat ends with the appearance of the first stars in the skies.

He was echoed by the head of the Shas party, Aryeh Deri, who insisted Judaism’s day of rest was so sacred that one simply couldn’t ask for forgiveness after disrespecting it. The former PM “offended many Shabbat-observing Jews and offended his loyal partners, for whom the holy Sabbath is very dear to their hearts,” Deri said.

Even an Olympic gold medal isn’t a worthy enough reason to “desecrate the Sabbath,” Bezalel Smotrich, the chief of the far-right Religious Zionism party, pointed out.

Netanyahu’s Likud party later said on Twitter that it “always safeguarded and honored the Sabbath.” It apologized and tried blaming the poorly timed statement from its leader on a “technical error,” but the damage had already been done.

The right-wing MPs praised Bennett for upholding Jewish tradition – the prime minister told Ashram by telephone that he had learnt about her win only after the Shabbat had ended. “Mr. Netanyahu should’ve done the same,” Gafni said.