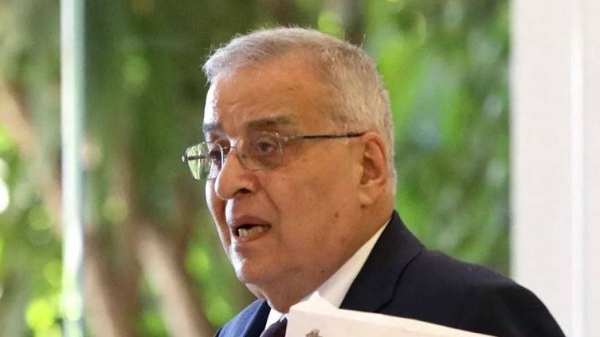 Now it is the turn of Lebanese FM Bou Habib to offend Kingdom after Kordahi!

Lebanese Information Minister George Kordahi is not the only Lebanese political leader who voiced his grudge against Saudi Arabia and its Gulf allies.
Kordahi’s offensive comments against the Saudi-led Arab Coalition to Restore Legitimacy in Yemen have triggered stringent actions from the part of the Kingdom and some other Gulf nations.

But reports showed that Lebanese Foreign Minister Abdallah Bou Habib made much more aggressive statements against the Kingdom and later he tried to hide and block them from being publicized by the media.

Okaz/Saudi Gazette has obtained from its own sources statements made by Bou Habib to a group of journalists against the backdrop of the recent diplomatic crisis with the Kingdom.

He tried to retract the statement, asking them to hide it and not publish it, after his advisors advised him to immediately retract it so as not to provoke more anger against the country.

The minister’s office sought to block the publication of the statements, and tried to beg the journalists present at the minister’s press meet not to publish them.

The recordings showed Bou Habib’s hatred against Saudi Arabia and the Gulf countries, and his harmony with the malicious propaganda unleashed by the leader of the Hezbollah militia and his supporters in Tehran.

He also made irresponsible accusations against the Kingdom, in a manner that reflects the orientations of his country’s political system according to the visions of the party under Iranian tutelage.

During the press meet, Bou Habib, who seemed irritated by the Gulf decision, tried to reduce the crisis triggered by Kordahi’s statements. He also referred to the statements of his predecessor Charbel Wehbe, justifying it by saying, “even when we hired Wehbe, Saudi Arabia did not appreciate” it.

“Today, if they sack Kordahi, what will we reap from the Kingdom? Nothing; they will ask for more things.”

Bou Habib also downplayed the importance of the Gulf financial support to Lebanon, saying that the important aid came from the European Union.

“As for Saudi aid, it is not for the state, but was given during the elections and to the relief agency after 2006, which we do not know where it was spent, but the state did not take anything from it.”

Emphasizing the statement of Saudi Foreign Minister Prince Faisal Bin Farhan that the crisis is in Lebanon and not with Lebanon, Bou Habib indicated that even if the President and Prime Minister of Lebanon dismiss Kordahi, they will enter into an internal crisis with former Acting President Suleiman Frangieh.

Bou Habib criticized the Saudi Ambassador to Lebanon Walid Bukhari, for not calling him when the latest crisis erupted. The minister, who frequently repeated in his speech that Saudi Arabia did not appreciate what Beirut did, forgot about the billions of Saudi aid provided by Riyadh over the decades.

The minister’s speech seemed more naive as he justified drug smuggling and exporting it through his country to the Kingdom and that its drug market is the main motive behind smuggling, not the drug dealers in Beirut and its suburbs.

Bou Habib did not hesitate to stress that Hezbollah is a problem in Lebanon and for Lebanon, saying, “The Americans were pressing hard during the Trump era and in the presence of Secretary of State Pompeo, asking us to get rid of Hezbollah. But how can you get rid of it? I told them once: Send 100,000 Marines and save us.”

The minister also requested for initiating dialogue from Saudi Arabia, stressing that “the prime minister wishes for a call from Riyadh to fly quickly, regardless of his schedule, to the capital of the Arab decision.”
Add Comment