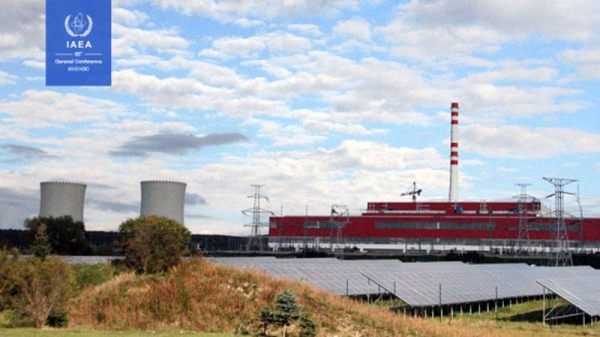 On the path to carbon neutrality, more than 40 countries and the European Union - representing over 70 percent of global CO2 emissions - have committed to net zero objectives, most of them by 2050. The deployment of low-carbon energy sources will be key to reducing emissions from the energy sector, in which electricity and heat production account for about half of all greenhouse gas emissions, according to the International Energy Agency.

As countries plan their route to net zero — i.e. to have no net greenhouse gas emissions — advanced modeling tools will be essential to assess the two main options for low-carbon energy: nuclear power and renewables.

On the margins of the 65th IAEA General Conference, IAEA experts hosted two virtual events on this topic: one featuring a new coordinated research project (CRP) on hybrid energy systems and another on a modeling framework to study the integration of various low-carbon energy options.

“Nuclear-renewable hybrid energy systems are integrated facilities comprised of nuclear reactors, renewable energy generation and industrial processes,” said Haseeb ur Rehman, a nuclear engineer at the IAEA, who presented at one of these events.

Hybrid energy systems simultaneously address the need for grid flexibility and greenhouse gas emission reduction, while optimizing financial resources. While nuclear power plants are dispatchable sources of energy — they can adjust output accordingly to electricity demand — some renewables, such as wind and solar, are variable energy sources that depend on the weather and time of day.

“A nuclear-renewable hybrid energy system can leverage the benefits of each technology and their mode of operation to provide reliable, sustainable and affordable low-emission electricity,” said Ed Bradley, IAEA team leader for Nuclear Power Plant Operation and Engineering Support and co-lead of the CRP.

“By performing a balancing act through flexible operation, also known as load following, or by adjusting output in terms of delivering heat or hydrogen, nuclear power can enhance the efficiency of renewables, mitigate electricity market volatility and deliver necessary ancillary grid services.”

Building on growing interest, in April 2022, the IAEA will launch the CRP on the technical evaluation and optimization of nuclear-renewable hybrid energy systems.

“The objective of the CRP is to advance knowledge surrounding modeling, simulation and analysis approaches for the design and optimization of the coordinated and integrated use of nuclear and renewable energy systems,” said Tatjana Jevremovic, IAEA team leader for Water Cooled Reactor Technology Development and co-lead of the CRP.

To improve the understanding of the complex interactions at play in decarbonized electricity systems, the IAEA is developing an integrated power system modeling capability, FRAmework for the Modeling of Energy Systems (FRAMES), to quantify the value that nuclear brings to low-carbon systems, like nuclear-renewable hybrid systems.

“The power system is evolving towards a larger, more complex and integrated system, more tightly coupled with transport and broader energy systems, which impacts the reliability and operation of power systems, the competitiveness of nuclear plants and the tools used for power system planning and analysis,” said Marco Cometto, energy economist at the IAEA.

FRAMES is still under development while being used for internal analyses of integrated energy systems.

FRAMES provide quantitative analyses on nuclear power’s potential benefits to present and future electricity systems, which is of particular interest for countries pursuing or considering nuclear power as part of their solution to meet net zero goals.

“This could be a powerful tool, not only to simulate energy systems but to show the synergy of nuclear and renewable technologies, which is particularly valuable for embarking countries in their efforts towards clean and affordable energy,” said Vladimir Artisyuk, adviser to the director general of ROSATOM.

The model evaluates short and long term impacts on overall carbon emissions, structure of the generation mix and cost of electricity provision, which helps to inform the economic impacts of achieving various CO2 emission targets.

“FRAMES represents a new and innovative model, which could provide unique analytical capability in the future to support the efforts of countries considering nuclear energy as a clean and sustainable option or for the larger community evaluating nuclear, fossil and renewable energy resources as part of a national energy portfolio,” said Sean Tyson of the US Department of Energy.

“The model calculates unit commitment, which is the optimal dispatch of existing generating units subject to all relevant constraints. Simultaneously, FRAMES can determine the best investments in new generating technologies, known as capacity expansion,” said Francesco Ganda, nuclear engineering expert at the IAEA.

It can perform several types of analyses. For example, at a side event earlier this week on nuclear hydrogen for a clean energy transition, Ganda presented hydrogen modeling in FRAMES, analyzing the relative competitiveness of four hydrogen production processes under different assumptions, such as CO2 emission limits and costs of the various technologies.