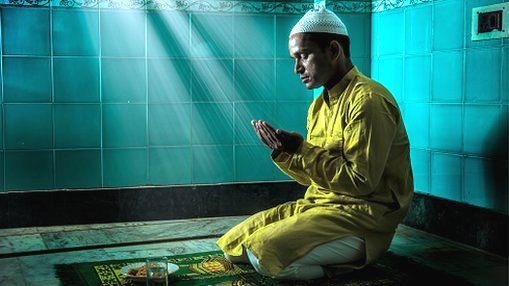 In April 2020 allegations about a Muslim congregation sparking a cluster of Covid-19 cases in India quickly took an Islamophobic turn.

Thousands of preachers from home and abroad had attended the gathering in Delhi by the Tablighi Jamaat, a near-100 year-old Islamic missionary movement. Narendra Modi's ruling Hindu nationalist Bharatiya Janata Party (BJP) government called it a "super-spreader event".

Islamophobic memes and hashtags blaming the group for spreading the virus trended on social media, and news networks broadcast incendiary headlines such as "Save the country from Corona jihad".

India charged nearly a thousand people who attended the congregation for flouting lockdown protocols. (Eight months later, courts had acquitted the last of the detained preachers, saying they had been "maliciously prosecuted" under directions from the government.) 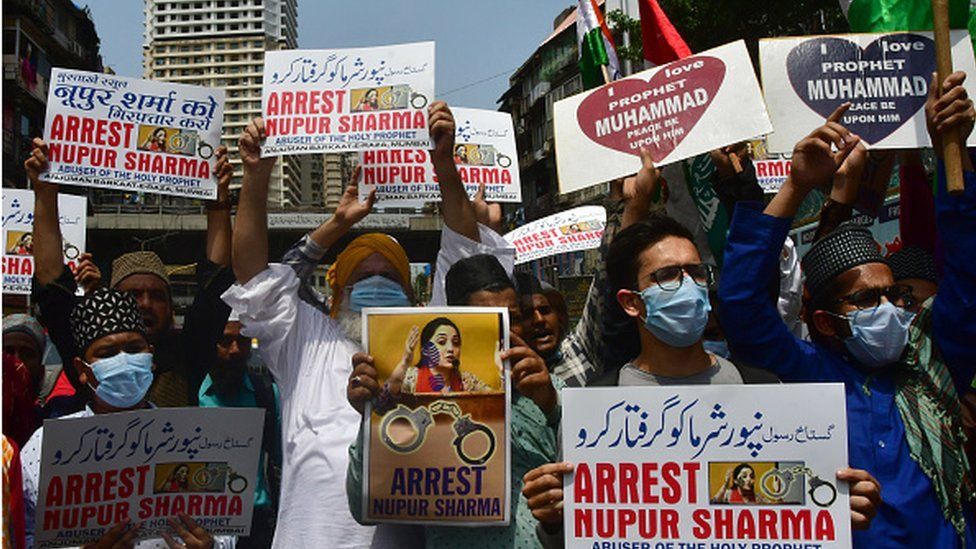 Muslims have protested against controversial remarks made by BJP leaders

Most of the preachers came from Indonesia, a trading partner of India. Not surprisingly, Indonesia expressed its disquiet over the issue at regional summit meetings. The country's lawmakers alleged that the controversy was being used to taint Muslims in Hindu-majority India. A former Indian diplomat said this was an example of "externalisation" of domestic issues.

India's ongoing diplomatic firefighting over offensive comments made by two senior members of the BJP about the Prophet Muhammad is not the first time that Mr Modi's party or government has faced global censure for alleged Islamophobia.

Two years ago BJP MP Tejasvi Surya found himself in the centre of a storm when his 2015 tweet on Arab women went viral. Prominent businesspeople, lawyers and commentators in Dubai and Kuwait condemned his remarks. (Mr Surya deleted the tweet later.)

In a 2018 public meeting, India's interior minister Amit Shah said that Bangladeshi citizens who had entered India illegally were "infiltrators" who had "eaten our country like termites".

This whipped up a storm in Muslim-majority Bangladesh, where a senior minister described the remark by India' second most powerful leader as "unwanted and uninformed". A Bangladeshi columnist wrote that Mr Shah "had a long history of making hateful, insulting remarks about Bangladesh".

Over the past year, India has been hit by a tsunami of hate speech by saffron-robed right-wing Hindu radical leaders against the country's 200 million-strong Muslim community. Some of them have openly exhorted Hindus to take up arms and spoken about genocide of Muslims.

In the past, the right-wing has raised the bogey of so called "love jihad", a baseless conspiracy theory accusing Muslim men of converting Hindu women by marriage. Vigilante Hindu mobs have lynched suspected Muslim cow smugglers and demanded a boycott of businesses owned by the community.

On social media, female Muslim journalists and social workers have been ferociously trolled. Muslim women have been put up for sale in fake online auctions. Partisan news networks have added fuel to the fire by provoking participants into taking up extreme positions during shrill talk shows. 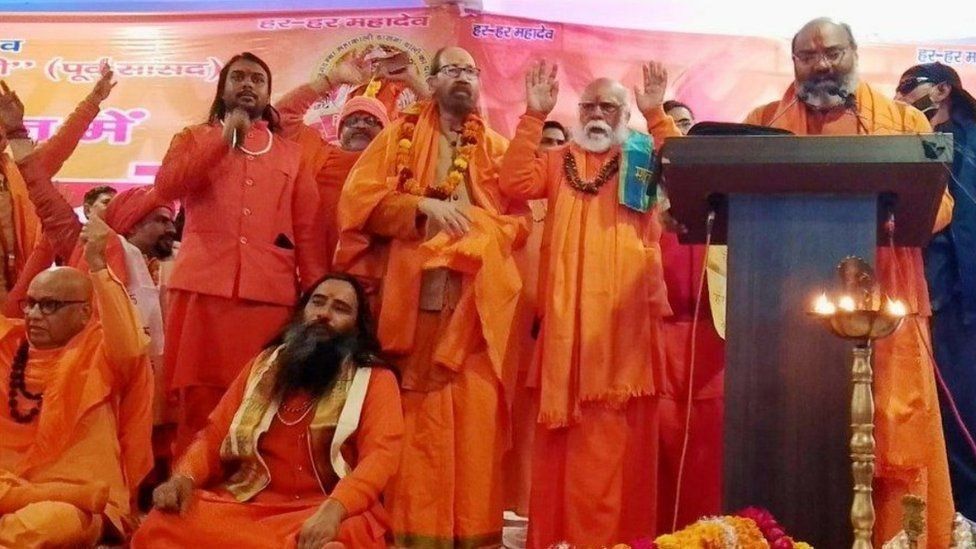 Some Hindu leaders called for violence against Muslims in December

Mr Modi's government has either maintained a studied silence, been slow to respond or blamed "fringe elements" for such actions.

All this appears to have emboldened ordinary Hindus to go online and tarnish Muslims. There have been consequences. In 2018, a popular Indian-origin chef working in a Dubai hotel was fired for posting an anti-Islamic tweet. When Indians living in Dubai began posting anti-Tablighi Jamaat tweets in 2020, a local businesswoman with links to the ruling royal family tweeted that "anyone that is openly racist and discriminatory in the UAE will be fined and made to leave".

This time too, unsurprisingly, the blowback has been fierce - 15 countries, including Saudi Arabia, Iran and Qatar, have lodged protests with India. Making derogatory remarks against the Prophet was clearly "crossing the red line", says Talmiz Ahmad, a former Indian diplomat.

Mr Modi's government has been forced to suspend its spokesperson for her remarks. It is a reminder that "targeting minorities with impunity, and hate speech with official sanction, will have repercussions for India's global reputation," notes Pratap Bhanu Mehta, a leading scholar.

In private, many BJP leaders believe that the outrage will soon die down, and it will be business as usual. 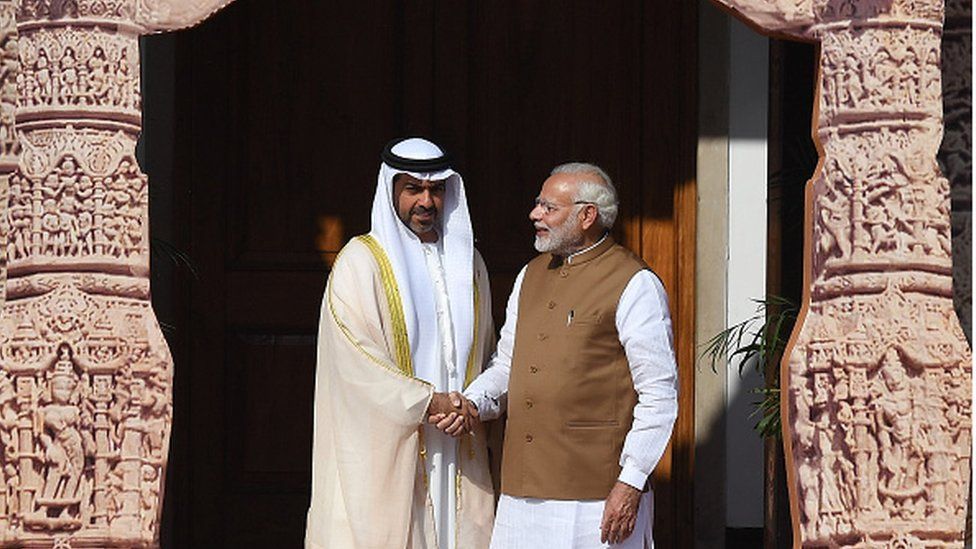 Prime Minister Modi has made relations with Gulf countries a priority

After all, India has an old and deep relationship with the Gulf countries. Some 8.5 million Indians work in the six Gulf countries belonging to the Gulf Cooperation Council (GCC), more than double the number of Pakistanis, the next highest expatriate workforce.

Indians also form the largest expat community in each of these countries. They send home some $35bn every year in remittances that support 40 million family members at home, many in some of India's poorest states such as BJP-ruled Uttar Pradesh. Trade between India and GCC countries is about $87bn. Iraq is the largest exporter of oil to India, followed by Saudi Arabia. More than 40% of India's natural gas comes from Qatar.

Prime Minister Modi himself has made relations with Gulf countries a priority. "India has a significant relationship with West Asian countries in terms of energy security, employment of people as migrants and remittances that they send back," says Srinath Raghavan, a professor of history and international relations at the Ashoka University.

But India cannot be complacent and take things for granted. "It's a myopic way of looking at things," says Mr Ahmad, the former diplomat who is also author of a new book, West Asia at War. "Indians have built a reputation as an apolitical, law-abiding and technically proficient people in these countries. If such offensive talk continues, employers in the Gulf could quietly start moving away from hiring Indians. Why would they risk hiring a potential zealot?"

This time Mr Modi's government, experts believe, appears to have reacted late, but resolutely. "There seems to be an acknowledgement that if these things happen there can be consequences. Domestic and foreign politics are not insulated. The government has to make up its mind. Does it really want to get into rabble rousing?" Prof Raghavan says.