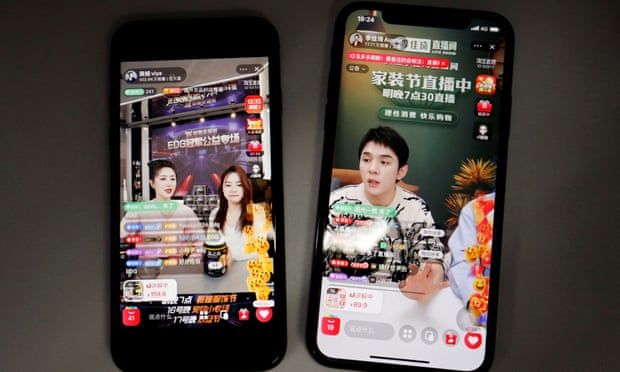 Hua Shao stands knee-deep in water at the edge of the sea, behind a table piled high with large crabs. The famous Chinese TV host is sweaty, sunburnt and laughing with a co-host as a red-and-blue fishing boat bobs behind them.

“The sea-ears taste so good, it must have been collected from a sea area where the water is very clear,” he tells more than 100,000 people who are watching online.

It’s the eve of “618”, one of China’s biggest retail festivals, which are increasingly driven by the weird world of livestream shopping channels.

Amid major economic concerns in China and arduous zero-Covid policies, 618 will give a strong indication of just how people’s urge to shop has been affected. Discounts and deals are ubiquitous, promoted by legions of actual and aspiring retail celebrities. Hua is a big gun. 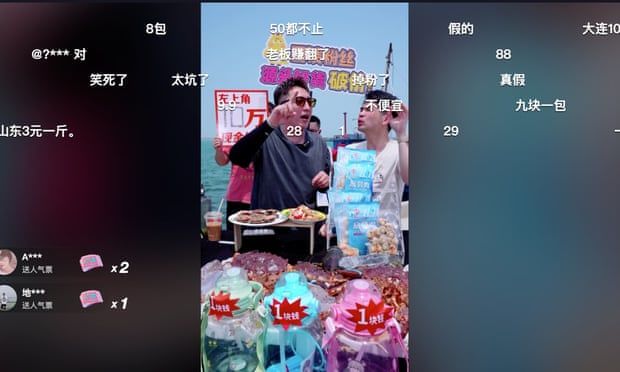 Hua Shao sells crabs, sea-ears and soap while standing in the sea on the eve of one of China’s biggest shopping festivals, 618.

The livestreams, which are spread across China’s internet and social media, occupy a space in between Instagram influencers and the late-night TV shopping channels of the 1980s and 90s.

On platforms such as Taobao and Douyin – China’s TikTok – billions of dollars are spent on the interactive pages of livestream shopping anchors. Many of these fast-talking and charismatic hosts have now become A-list celebrities. Some channels are slickly produced, surrounded by products and brands, guests, frenetic bells, whistles and countdowns creating a sense of urgency among viewers to splash the cash.

The most successful hosts have tens of millions of loyal viewers, and sell hundreds of millions of items. Li Jiaqi is arguably China’s most famous, known among his tens of millions of followers for his enthusiastic catchphrase: “Oh my God, buy it!” He earned the nickname the Lipstick King after he broke the Guinness World Record for “the most lipstick applications in 30 seconds”. In 2020, Li claimed he could do 389 broadcasts in 365 days, often working from midday to 4am.

Livestreaming accounts for 10% of Chinese e-commerce revenue, according to the management consultancy firm McKinsey. It now underpins retail campaigns such as Singles Day and Double 11 – annual shopping festivals that eclipse the US Black Friday and Cyber Monday sales. In 2020, the industry had an estimated merchandise value of $171bn (£140bn). This year, McKinsey predicts it will surpass $420bn.

More than a third of the products are fashion-related, followed by beauty products, fresh food and tech. Occasionally, there’s an eyebrow-raising outlier – in 2020 one of the country’s most popular sellers hawked a $5.6m commercial rocket-launch service.

Analysts estimate that almost half a billion people made purchases on a shopping livestream in 2021, a 20% increase on the previous year, probably boosted by the pandemic keeping so many people at home.

Shopper Ms Du, in Zhengzhou, Henan, says the Douyin live streams were good for her and her daughter.

“For plus-size women’s clothing, the models are indeed large-sized, and it is more down-to-earth than other platforms,” she says.

Trust in the hosts is key. Often they use their clout to negotiate cheap deals for their viewers. The biggest names in live shopping are seen as having reliable opinions on the products they sell, despite the big-money contracts between them and brands such as L’Oréal, Adidas, McDonald’s and KFC.

But the explosive growth of the industry has drawn the attention of regulators. In December last year, one of the industry’s biggest stars, Huang Wei, who goes by the name Viya, was fined more than $210m for tax evasion. After the fine was announced, Huang apologised on her social media account, telling followers she felt “deeply guilty” and accepted the punishment.

Some fans said their discussion of Huang’s case was blocked on social media. Some spoke out in defence of her, and the product lines she endorsed.

“I was also very, very, very angry at Viya for evading taxes, but … her selection is more in line with my taste, especially home appliances and furniture and daily necessities,” said one Weibo user.

The most recent scandal is a little more complicated. On 3 June – the eve of the Tiananmen Square massacre – Li appeared to present to camera an ice-cream cake that resembled a tank. It wasn’t clear that Li was aware of the possible significance of the cake. But his feed was abruptly cut and social media mentions of his name censored.

Li hasn’t been back online since. What that means for the brands he promoted to his tens of millions of followers isn’t clear. Some companies, however, are now choosing to sell via AI-generated hosts instead.