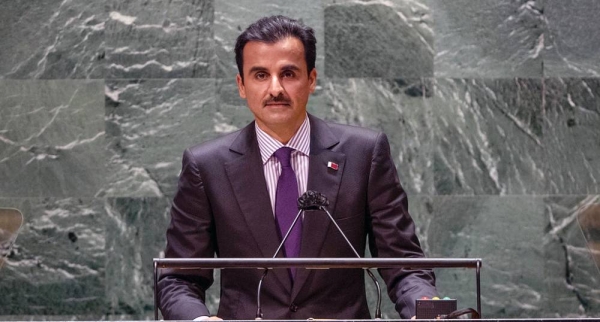 On Afghanistan, Qatar calls for separating aid from political differences

The international community must continue to support Afghanistan, the Emir of the State of Qatar Sheikh Tamim Bin Hamad Al-Thani told the UN General Assembly on Tuesday, warning against potential boycott in the wake of the Taliban takeover.

Qatar hosted the first-ever direct negotiations between the Afghan authorities and the Taliban, in its capital, Doha, starting last September, and the Emir underlined his country’s continued support for peace.

"In coordination with our international partners, we will continue to do all what is necessary to ensure that the tangible gains achieved within the Doha path will be maintained. It is necessary that the parties abide by their commitments,” he said, speaking through an interpreter.

Since the Taliban seized power in August, the UN has repeatedly announced its commitment to stay and deliver in support of the Afghan people to achieve peace, stability, development and respect for human rights for all.

The Emir stressed Qatar’s “firm position” on the need to protect civilians in Afghanistan, respect human rights, combat terrorism and achieve a political solution that will ensure security and stability for the country.

“In this regard, we emphasize the importance of the continued support of the international community to the Afghan people at this critical stage, and to separate between humanitarian aid and political differences," he said.

"It is also important to continue dialogue with the Taliban. Boycotting them will only lead to polarization and reactions, whereas dialogue could be fruitful."

The Afghanistan issue, he said, "is not a matter of victory or defeat but rather the failure to import a political system. Regardless of intentions, efforts made, or money invested, this experience in Afghanistan has collapsed after 20 years.”

This year also marked a decade since the start of the Syrian war, and the crisis continues to pose “immense perils”, including increased threat of terrorism in the country, the region and the world at large.

Turning to Libya, the Emir spoke of positive developments, which give rise to “cautious optimism", such as the ceasefire, the resumption of the Libyan Political Dialogue Forum, and the election of an interim authority.

"We call upon all Libyan parties to preserve these gains and ensure the full implementation of what has been agreed upon on the political, economic and security tracks, and to successfully hold elections and work on reaching comprehensive reconciliation," he said.

The developments stem from a landmark agreement between Libya’s two warring administrations, reached in Geneva in October 2020.

The accord was negotiated under the auspices of the UN mission in Libya, UNSMIL, which is supporting efforts towards historic presidential and parliamentary elections set for December.

The Emir also addressed the seven-year war in Yemen between government forces, backed by a Saudi coalition, and the Ansar Allah movement, also known as the Houthis.

The fighting has generated a tragic humanitarian situation and risks of division that could cause further conflicts, he warned.

While affirming “keenness” for Yemen’s unity and territorial integrity, he stated Qatar’s firm position that the only way out of the crisis is through negotiation between the parties on the basis of the national dialogue, the 2011 Gulf Cooperation Council Initiative, and relevant UN Security Council resolutions.