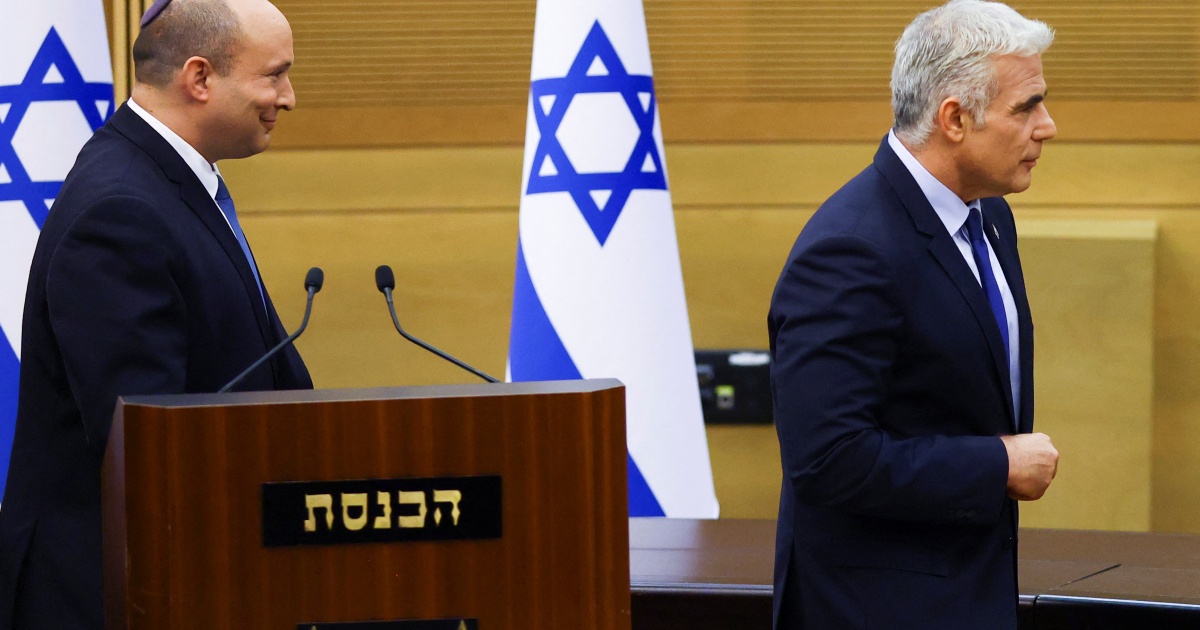 On the way out: Why is Israel’s government about to fall?

Israel’s governing coalition has announced that it can no longer govern – does that mean a return for Netanyahu?

Israel’s governing coalition announced on Monday that it will dissolve parliament, or the Knesset, next week, which means that the government will disband, and the country will hold elections for the fifth time in three years.

Here’s a closer look at why this is happening, and what comes next.

The Israeli government is collapsing – again?

The Israeli government – a mix of eight parties including the right-wing, centrists and a party representing Palestinian citizens of Israel – has been fragile since it first took office just over a year ago.

But the contradictions within the coalition have risen to a head, and Monday’s decision came after weeks of speculation that the coalition was on its way out.

The main thing that united them was opposition to Netanyahu, but ultimately that has not been enough to keep them together.

What pushed the coalition over the edge?

With a razor-thin parliamentary majority and divisions on major policy issues such as Palestinian statehood, Israel’s occupation of the West Bank and issues concerning religion and the state, the alliance began to fracture when a handful of members defected.

In April, the coalition lost its majority in Israel’s 120-seat parliament when a member of Bennett’s right-wing Yamina party, Idit Silman, announced her departure.

In recent weeks, another trickle of defections and rebellions left Bennett’s coalition without the ability to pass legislation, raising questions as to how long it can survive.

The United Arab List has also threatened to withdraw in protest over Israeli attacks on Palestinians at the Al-Aqsa Mosque compound, as well as continued raids in the occupied West Bank that killed Palestinians.

Bennett had already warned of a possible collapse earlier this month after Nir Orbach, another member of the Yamina party, said that he would stop voting with the government coalition.

The final straw came two weeks ago when a bill extending Israeli civil law to settlers in the occupied West Bank was defeated in parliament.

The settler law, which would normally enjoy broad support in parliament and has been repeatedly renewed over the past 50 years, failed due to the increasingly bitter climate between the government and opposition, with the latter choosing to vote against a law they support in order to further weaken the government.

Ultimately the contradictions within the governing coalition have proven to be too insurmountable, particularly as the government had very little wiggle room in parliament, and an opposition that was determined to bring it down.

The Israeli parliament will meet on Tuesday to present a draft resolution for its dissolution and for holding early elections.

If the parliament is dissolved, as is expected, Bennett will step aside to be replaced by Lapid as acting prime minister until new elections can be held, as part of the deal they had which formed the coalition.

Some political observers believe there remains a chance that an alternative government can be formed without going to another election, as Israel’s right-wing parties on both sides of the government-opposition divide will be under pressure to join together, considering the right-wing majority in parliament.

Many Israelis are tired of elections, and the prospect of another one before the end of the year may lead to more apathy.

However, if the country does head to new general elections, they will have to be held within 90 days of the parliament’s dissolution, with a possible date of October 25 already put forward.

The new vote could set the stage for a return to power for Netanyahu.

Netanyahu has said he will return to office. “I think the winds have changed. I feel it,” he declared.

Netanyahu’s camp is now courting individual members of the Knesset, as well as entire parties, in an attempt to get them to defect.

Opinion polls have forecast that Netanyahu’s hardline Likud will once again emerge as the largest single party. But it remains unclear whether he would be able to muster the required support of a majority of lawmakers to form a new government.

Ultimately it will boil down to whether Netanyahu, who continues to face corruption charges and is an extremely divisive figure in Israeli politics, even on the right wing, will be able to convince enough politicians to back him again.