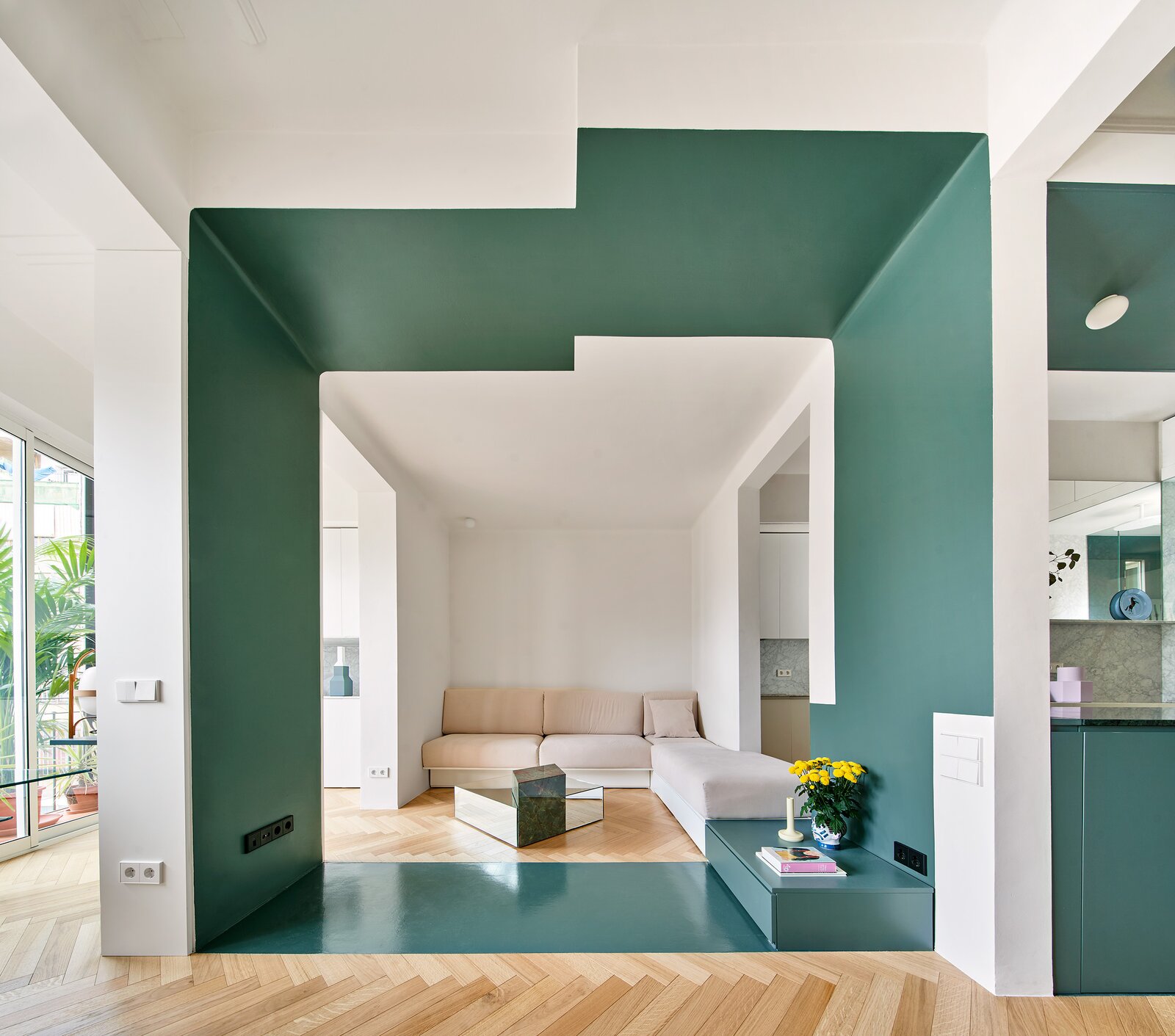 Barcelona-based architecture office AMOO transforms a 650-square-foot apartment from the 1920s into a bachelor pad with a focus on light and color.

When Barcelona resident José Antonio started looking to purchase an apartment, he asked local architect Omar Ornaque of AMOO to weigh in on the options he was considering. The client and architect agreed that a flat on the first floor of a 1925 building in Barcelona’s La Nova Esquerra de l’Eixample neighborhood was the right choice, due to its excellent location and nearly 10-foot-high ceilings. The only problem with the roughly 650-square-foot unit was that it didn’t receive a lot of natural light. 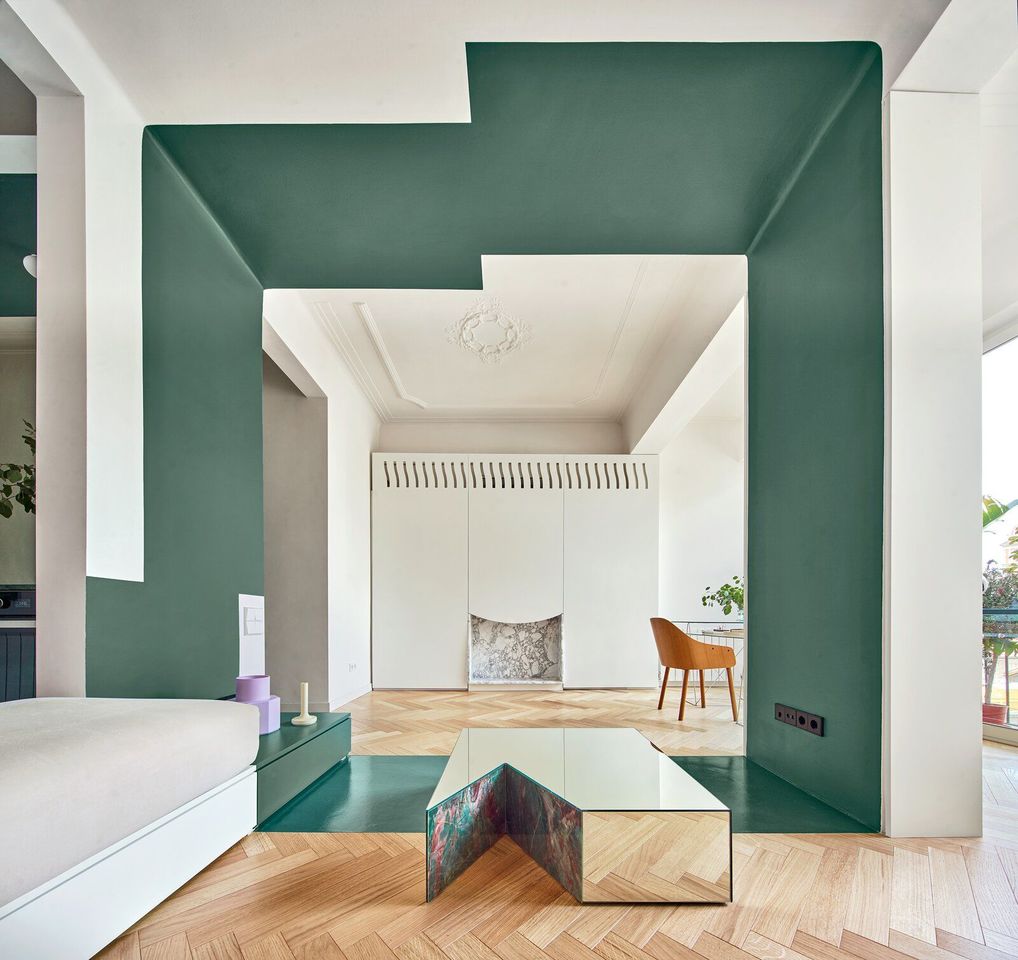 The original apartment featured a long, narrow hallway that extended from the entry doorway to the patio and was separated from the small, enclosed living areas by a load-bearing wall. "All the work [we completed during the renovation] was made to reduce the corridor," says Ornaque, who cofounded the Barcelona-based practice with architect Aureli Mora. "That’s why we took the position to make the green elements," Ornaque continues. By demolishing most of the existing partitions and dividing the spaces by a long, painted stripe, the architects could begin to make the apartment feel bigger and brighter than it had initially. 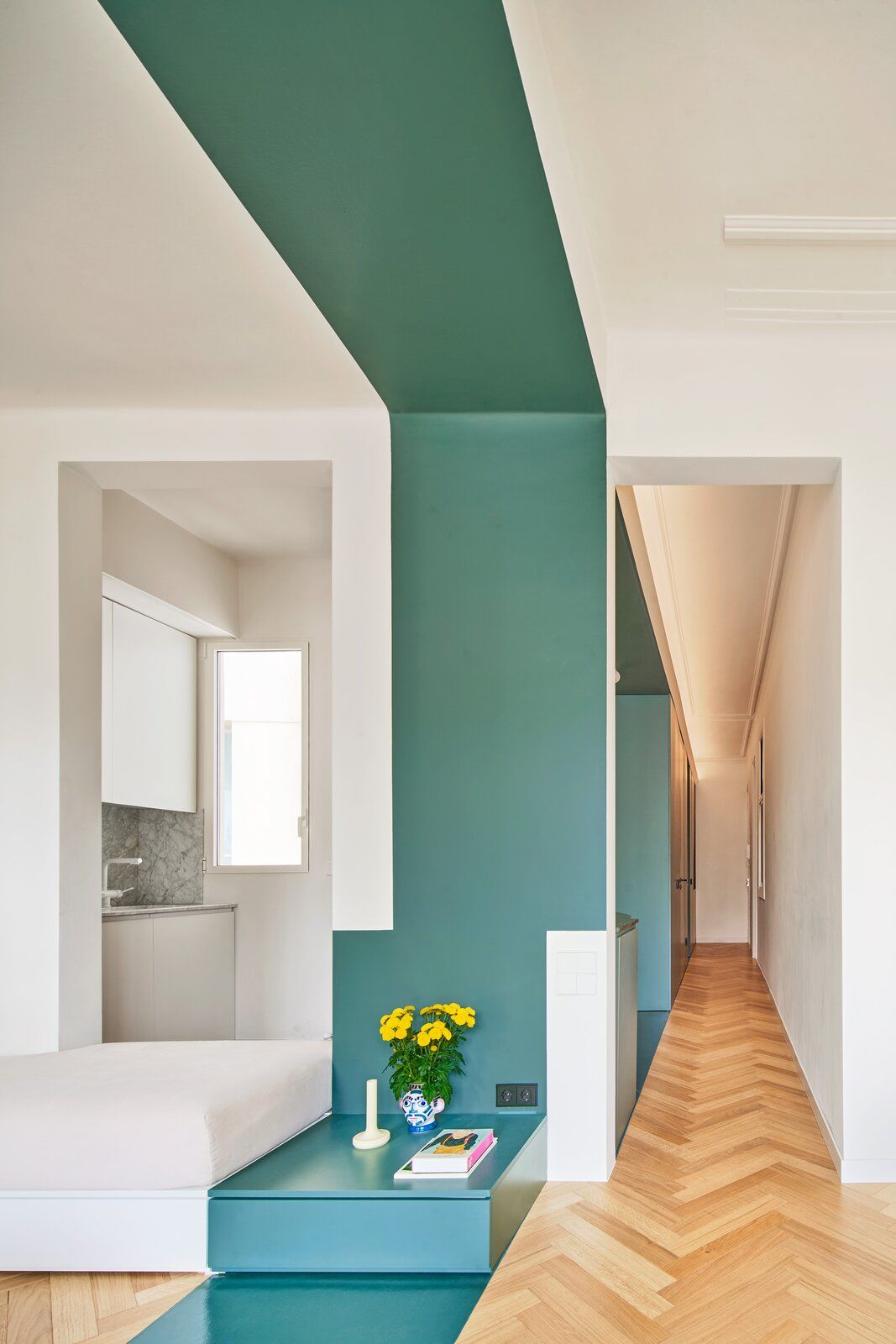 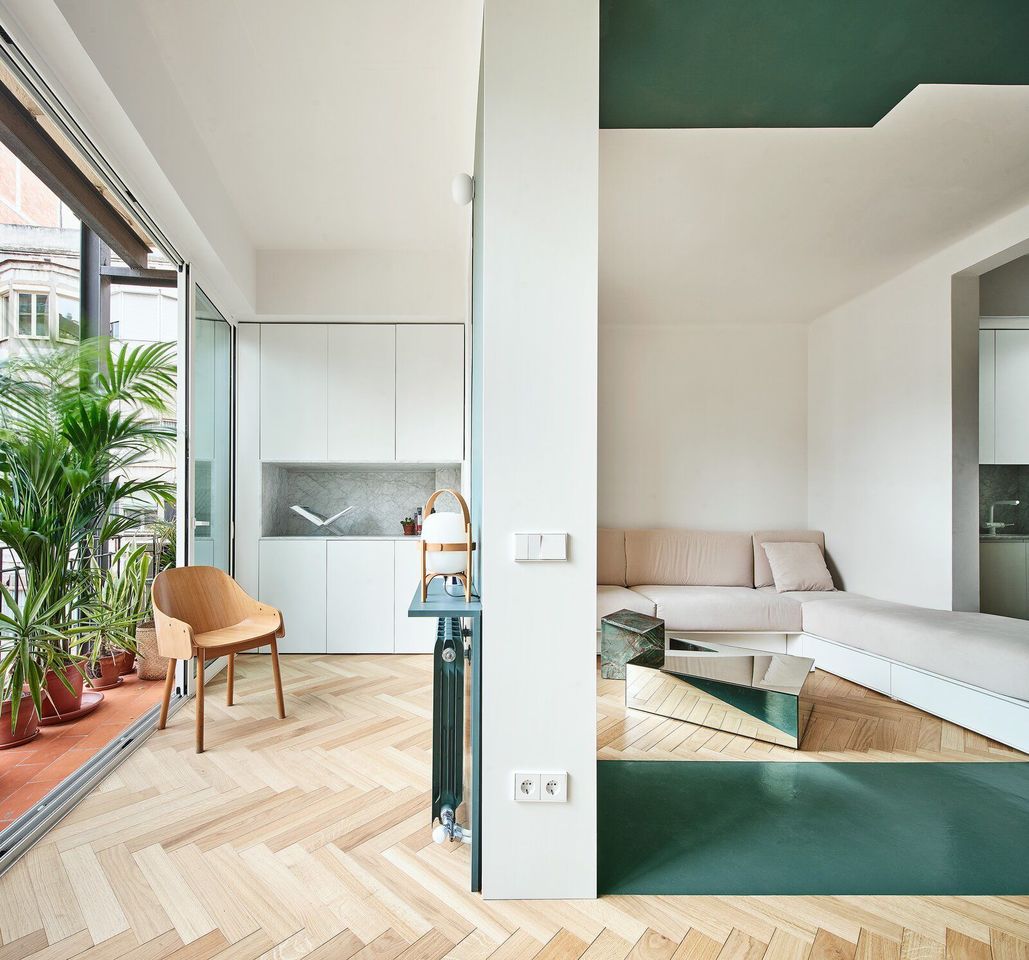 In order to allow light to flow from one end of the apartment to the other, the architects cut windows into the walls that connect the living room to the kitchen, and the kitchen to the bathroom. This means that if someone is showering in the bathroom, whoever is in the kitchen can see them. Luckily, José is a 34-year-old bachelor who lives alone and was ready to embrace unique design choices. 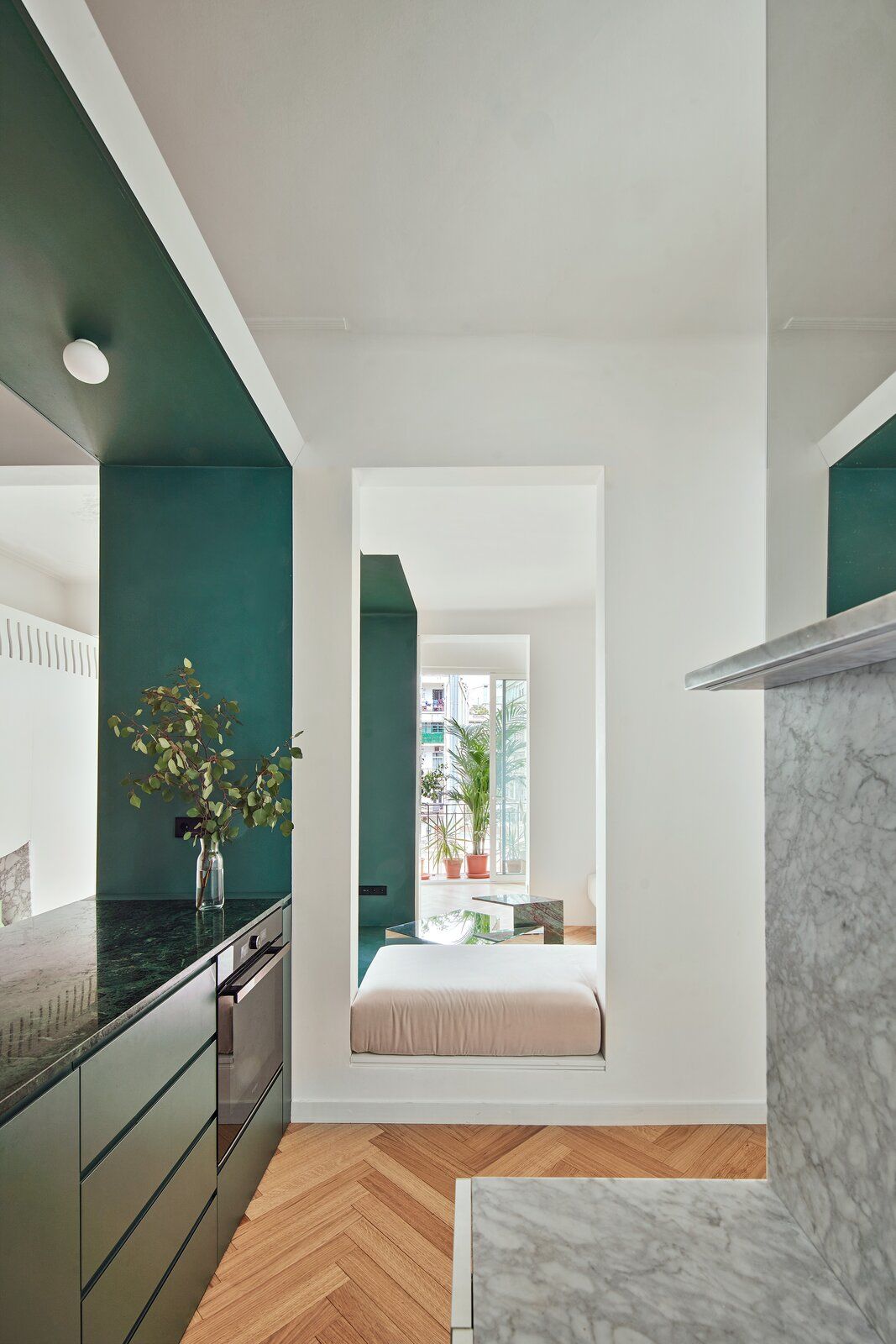 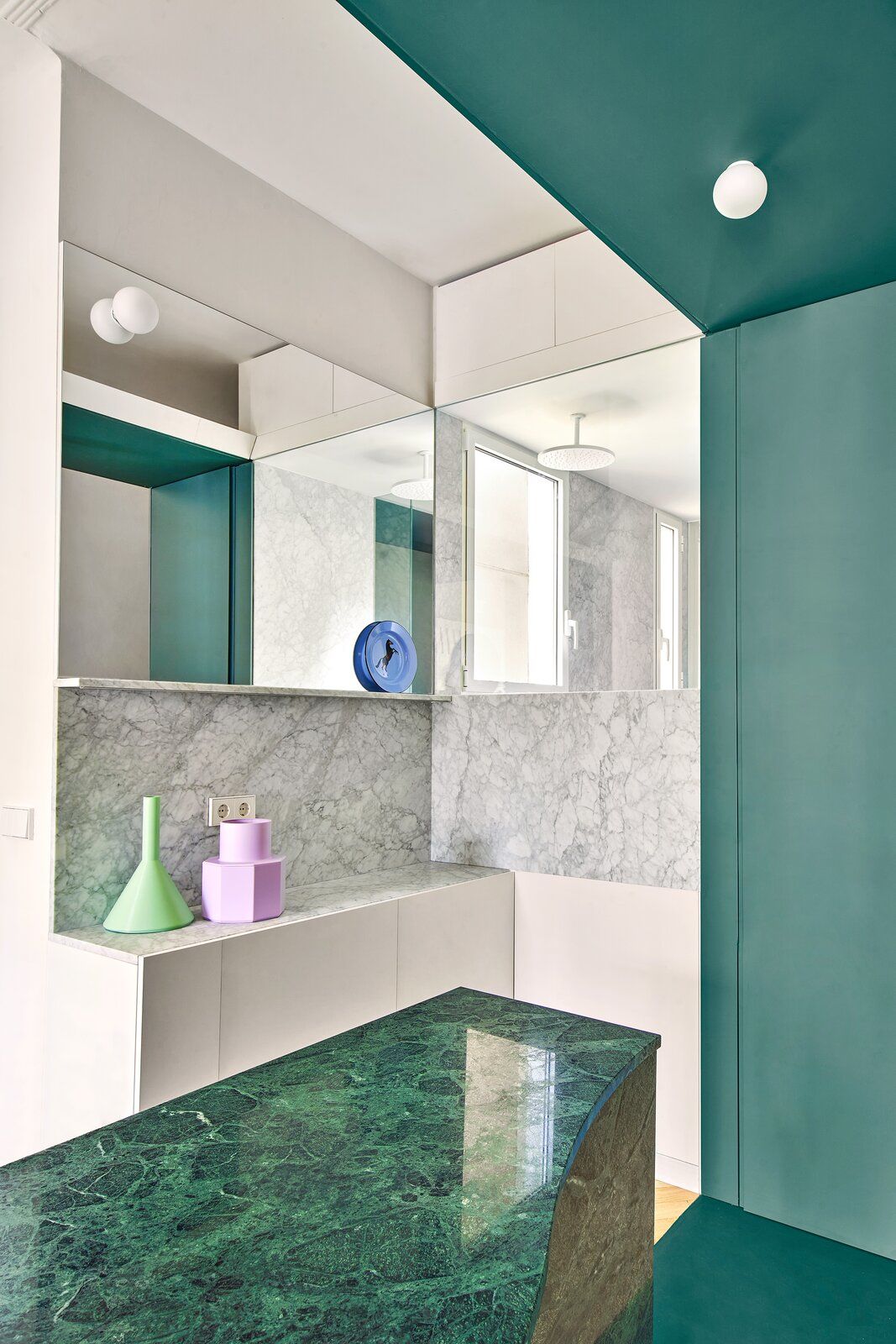 "It’s very difficult to convince a client to make an open shower," the architect states. "If this was a flat for a family, it would be impossible, but it’s a flat for a single [guy who] wants this kind of hedonistic dwelling. He doesn’t care if in ten years his life changes-he likes how it looks right now for the kind of life he’s [living]." 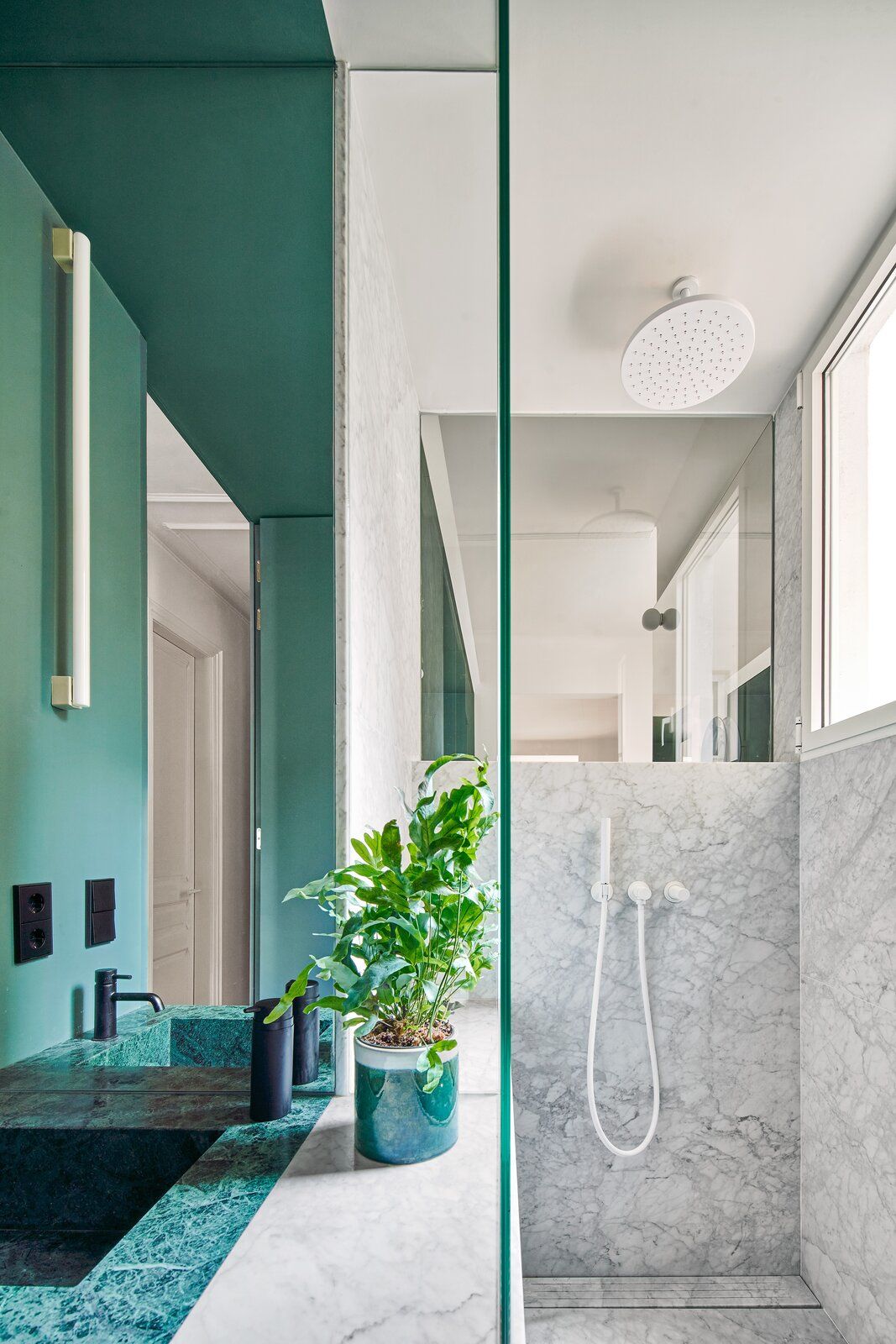 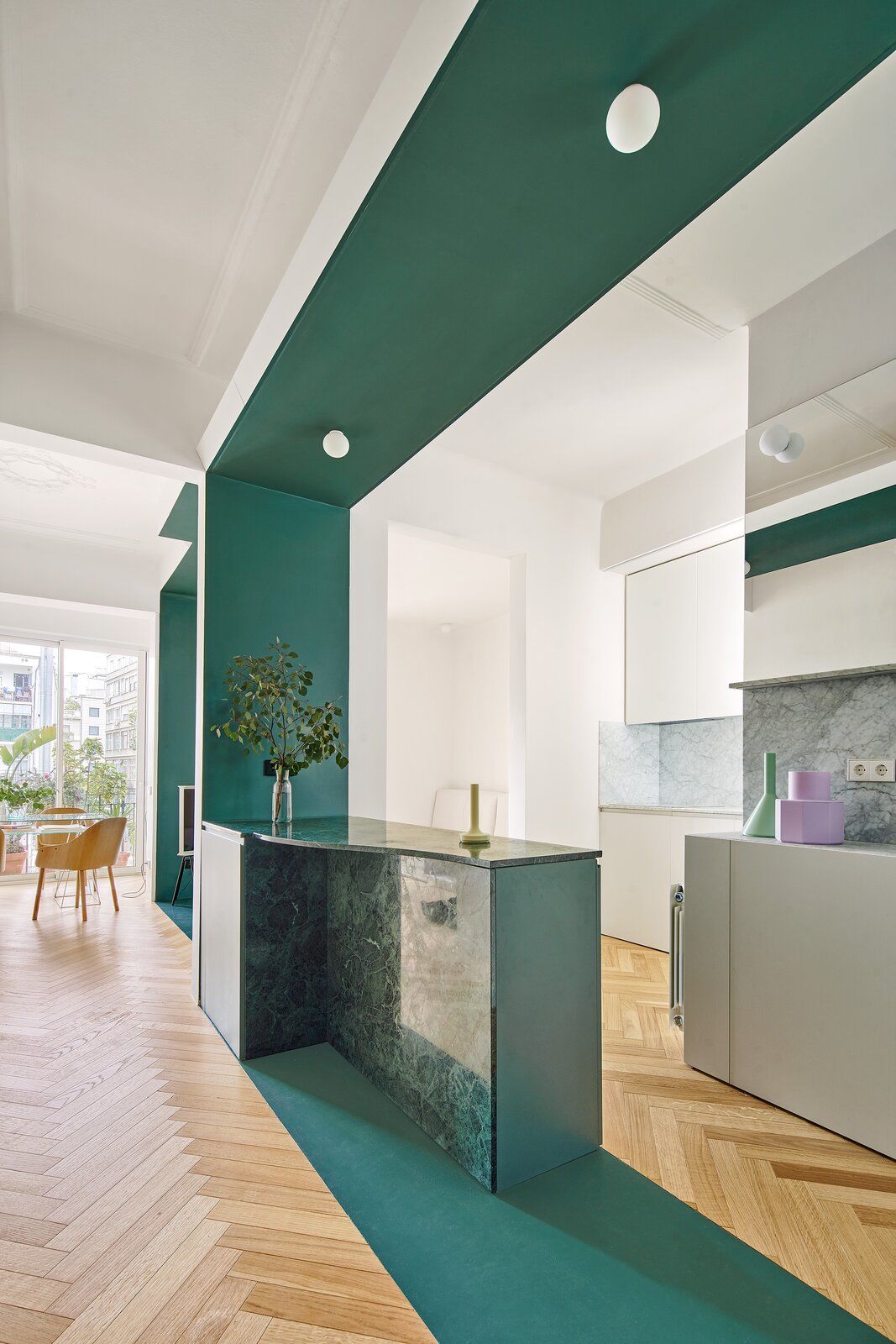 In addition to brightening up the spaces, the architects also considered how to update the 1920s apartment for easy entertaining. Thanks to the cutout window between the kitchen and living room, José can prepare meals for his friends while they’re seated in the lounge area, and the groups can maintain conversations-and even pass food and drinks between the spaces. There’s also plenty of room on the patio for guests to gather, and if someone has a bit too much to drink, they can crash in the spare bedroom. 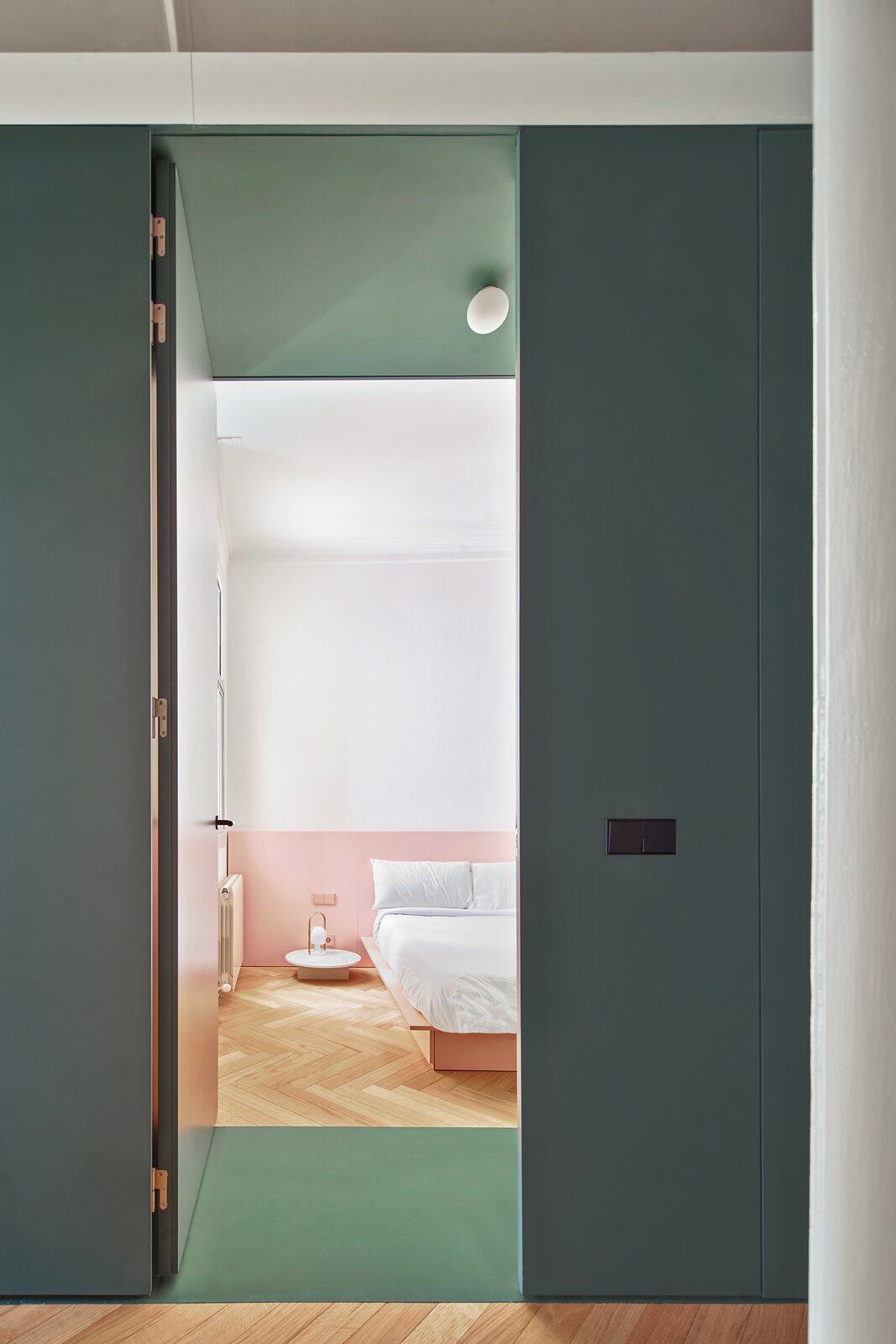 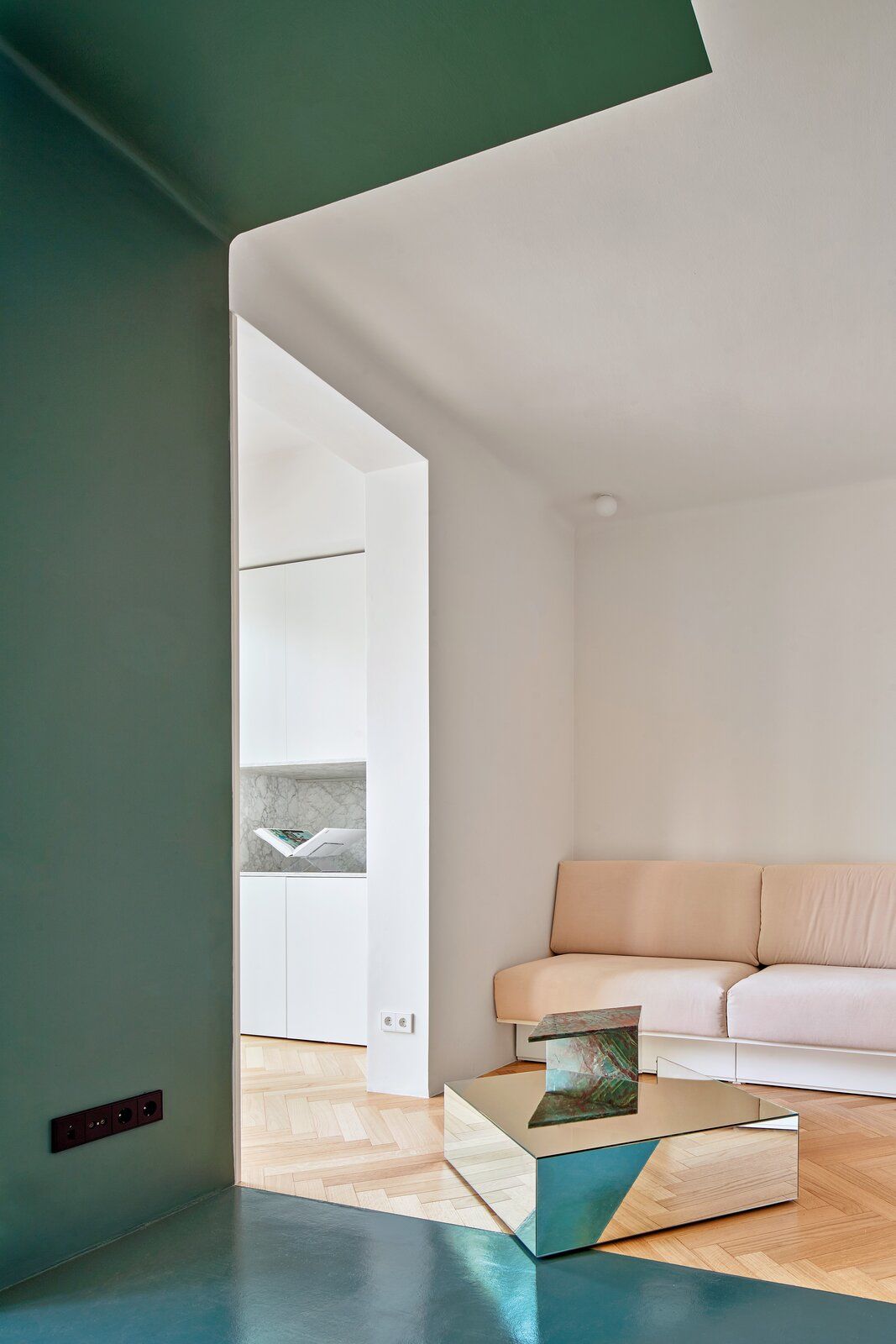 As for the distinct use of color throughout the interior: Ornaque and Mora gave José a few distinct combinations to choose from, including a more sober white scheme with gray accents and red marble, but the client ultimately chose green.

"He wanted the marble to be the same green that we painted the [partition], so it’s a change of material but not color," says Ornaque. The refurbished kitchen and bathroom feature Verde Guatemala marble countertops and white Carrara backsplash. Meanwhile, the architects added light-pink accents to the bedroom and living areas for contrast. 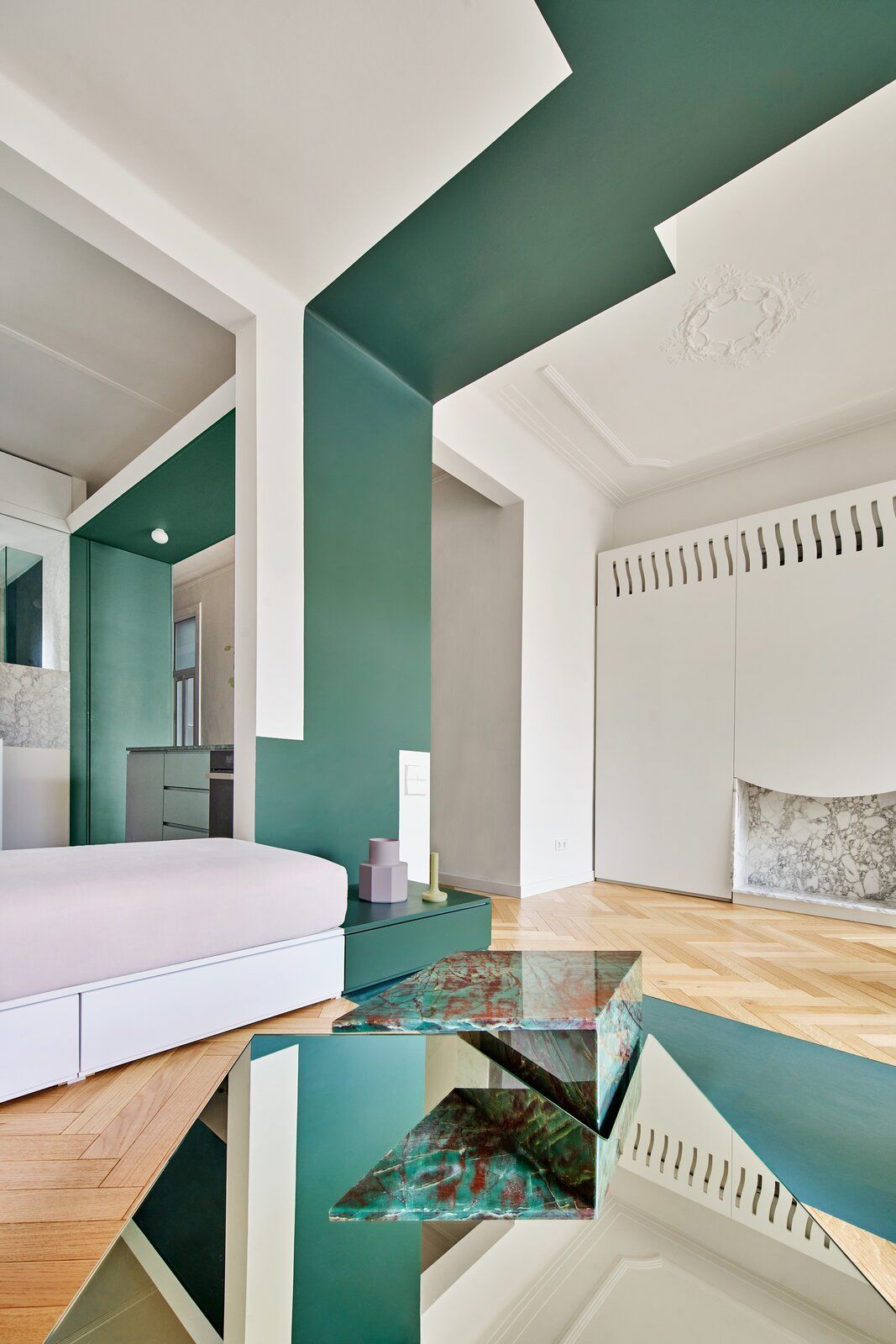