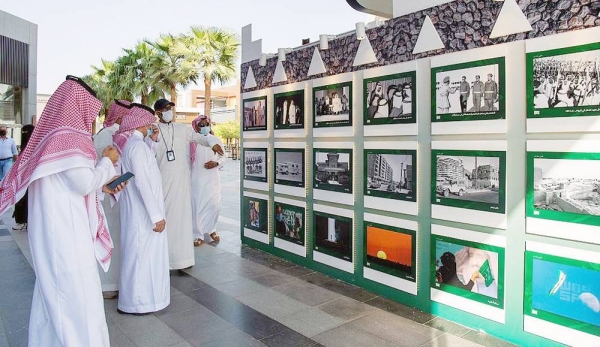 The President of the Saudi Press Agency (SPA) Dr. Fahd Bin Hassan Al Aqran on Wednesday inaugurated the "SPA" photo exhibition, which is being held as part of the celebration of the Kingdom's 91st National Day.
Held at Riyadh Front, the exhibition includes a number of photos that talk about the renaissance and cultural development of the Kingdom. (Kaden) Real Estate Development Company has allocated a prominent space for the photo exhibition at Riyadh Front.

By holding this exhibition, SPA aims to reach the various segments of society and brief them through a creative visual window on the history of the Kingdom's kings over the ages and the development and growth that the country witnessed in various fields till this splendid and prosperous era.The exhibition, which was sponsored by (Ala Kaifak), one of the retail trade companies in the Kingdom, witnessed on its first day a remarkable presence of visitors to Riyadh Front of different ages, who expressed their pride and glory in what they saw in the exhibition.

The exhibits of photos expressed the historical and cultural heritage that abounds in the Kingdom since the era of late King Abdulaziz Bin Abdurrahman Al Saud, through his sons, the righteous kings until the era of the Custodian of the Two Holy Mosques King Salman.
Add Comment