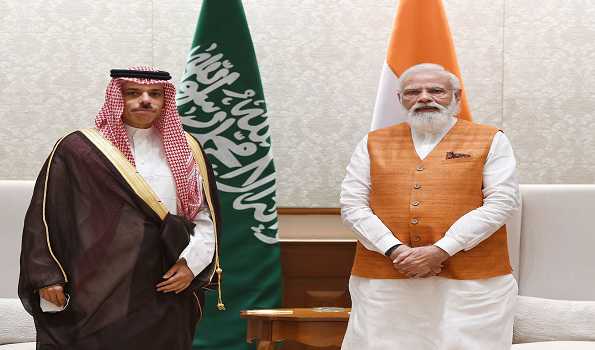 “Conveyed my regards to His Majesty the King and His Highness the Crown Prince.”

An official statement later said the meeting reviewed the progress on various ongoing bilateral initiatives, including those taken under the aegis of the Strategic Partnership Council established between both countries.

The meeting also allowed exchange of perspectives on regional developments, including the situation in Afghanistan.

Prime Minister conveyed his special thanks and appreciation to the Kingdom of Saudi Arabia for looking after the welfare of the Indian diaspora during the COVID-19 pandemic.

He also conveyed his warm greetings and regards to His Majesty the King and His Highness the Crown Prince of Saudi Arabia.

According to Saudi Gazette, during the reception, Prince Faisal conveyed the greetings of King Salman and the Crown Prince Muhammad Bin Salman to the government and the Indian people.

They reviewed the historical and solid Saudi-Indian relations between the two friendly countries and peoples, and discussed strengthening them and moving them towards broader horizons to achieve the aspirations and hopes of the two friendly peoples for further progress and prosperity, it said.

They also discussed regional and international issues of common interest, and everything that would enhance international peace and security.

It said that Prime Minister Modi praised the Kingdom's leadership role in protecting the planet through its initiatives in this regard, expressing his appreciation for what was included in the Crown Prince's announcement of the Green Saudi Arabia and the Green Middle East initiatives.

The two sides also touched on ways to consolidate the economic partnership between the two friendly countries in light of the Kingdom's Vision 2030, in addition to intensifying cooperation between the Kingdom and India in many areas of common interest, it said.

Prince Faisal on Sunday held talks with External Affairs Minister S Jaishankar, which focused on Afghanistan, the Gulf and the Indo-Pacific, besides bilateral relations.

On Sunday evening, he held talks with Union Minister for Housing and Urban Affairs and Minister for Petroleum and Natural Gas Hardeep Puri and Minister of State for External Affairs Meenakshi Lekhi over dinner.