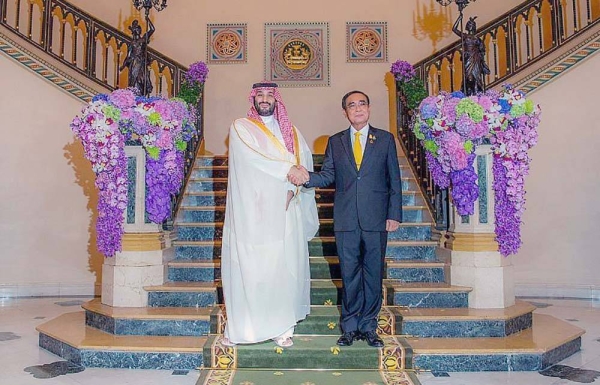 At the invitation of the Prime Minister of the Kingdom of Thailand, Gen.Prayut Chan-o-cha, and within the framework of the friendly relations between the two countries, and to promote mutual interests, Saudi Arabia’s Crown Prince and Prime Minister Prince Mohammed Bin Salman paid an official visit to the Kingdom of Thailand during the period from Nov. 17 to 18.
Recognizing the prominent roles of the Kingdom of Saudi Arabia in the international arena, Thailand extended an invitation to Saudi Arabia to participate in the Asia-Pacific Economic Cooperation (APEC) Forum as Chair’s guest with the firm belief that Saudi Arabia can play a constructive role in the Asia-Pacific region.

Prince Mohammed was received by King Maha Vajiralongkorn Phra Vajiraklaochaoyuhua, and Queen Suthida Bajrasudhabimalalakshana at the Chakri Maha Prasat Throne Hall on Nov. 18, which represented a historic event as it was the first meeting between the royal families of the two kingdoms after the full normalization of bilateral diplomatic relations in January 2022.

The Thai Prime Minister and Defense Minister Gen.Prayut Chan-ocha officially welcomed the Crown Prince and both sides held an official meeting at Government House to affirm their keenness to enhance bilateral, regional and international cooperation in all fields.

In the spirit of cooperation and common determination to enhance friendly relations between the two kingdoms and their peoples, the two leaders welcomed the signing of the major bilateral agreements and memoranda of understanding, which are as follows:

• Memorandum of Understanding regarding the establishment of the Saudi-Thai Coordination Council.

In the fields of political, defense and security cooperation, both sides discussed opportunities for cooperation on mutual interest, including the defense industry, combating transnational crimes in all their forms, such as combating terrorism, radicalism, and extremism, enhancing cyber security, building capabilities and exchanging information between the two kingdoms.

The two sides also expressed their readiness to enhance cooperation on consular affairs for the benefit of both nations.

In light of the current global economic challenges, the two sides discussed the role of the two governments in supporting the international efforts to effectively address them. Both sides also highlighted the importance of encouraging market-access of both countries, as well as the strong interaction between their private sectors to increase investment opportunities, to diversify bilateral trade, and increase the exchange of visits of trade delegations.

Both sides discussed ways and means to materialize investment opportunities in the Eastern Economic Corridor (EEC) and Special Economic Zones (SEZ) in Thailand and mega projects, such as the NEOM project in Saudi Arabia, based on the complementary nature and compatibility of the Saudi Arabia’s Vision 2030 and Thailand's Bio-Circular-Green (BCG) economic model.

Thailand expressed its readiness to support the “Saudi Green” and “Green Middle East” initiatives, in addition to cooperating with the Saudi Investment Fund to facilitate more economic cooperation in the future.

Both sides valued the importance of enhancing cooperation in energy fields such as supplying oil, petroleum derivatives, petrochemicals, clean technologies for hydrocarbon resources, biofuels, and renewable energy. In addition to exploring partnership opportunities and discussing joint projects in innovative uses of hydrocarbons in materials, transportation, and others potential forms of cooperation in the field of energy.

As for social and educational cooperation, both sides stressed the importance of strengthening communication between the two peoples. The Saudi side commended Thailand's decision to exempt Saudi citizens from entering Thailand for tourism purposes for a period of 30 days.

The two sides expressed their commitment to facilitate the exchange of visits at all levels. The Thai side praised the interest of the Saudi side in facilitating the issuance of visas for businessmen and tourists from Thailand to enhance trade, investment, and tourism.

In the field of health, both sides affirmed their keenness to support global initiatives to confront current epidemics and prepare for emerging diseases. The two sides also resolved to cooperate and work towards recovery after the emerging Corona Virus crisis (COVID-19).

Both sides agreed to discuss opportunities in the fields of radio and television, news agencies, and the press, exchanging experiences, and coordinating mutual media visits to serve the development of the joint media field.

Both sides also sought to encourage cooperation on enhance cultural exchange, and to discuss ways and means to enhance cooperation in various fields of sports.

The two sides stressed the importance of joint efforts to combat extremism and promote understanding, tolerance, peace, and security.

The Prime Minister Gen. Prayut Chan-o-cha, valued the efforts made by the government of the Custodian of the Two Holy Mosques in serving the pilgrims, praising the high level of coordination between the two countries to achieve the comfort of Thai pilgrims.

On international affairs, both sides exchanged views on developments in their respective regions, such as the situation in Yemen, Iran and Afghanistan. Both sides stressed the importance of strengthening cooperation with international organizations and multilateral fora.

The two sides reiterated their willingness to support each other in areas of common interest. In addition, both sides renewed their determination to continue coordinating and intensifying efforts to maintain international peace and security.

Prince Mohammed appreciated the support of Thailand in hosting the World Expo 2030 in Riyadh. The Thai Prime Minister expressed his appreciation to Saudi Arabia for its interest in supporting Thailand's candidacy to host the Phuket Expo 2028.

At the conclusion of the visit, Prince Mohammed expressed his thanks and appreciation to Gen. Prayut Chan-o-cha for the warm reception and hospitality accorded to His Royal Highness and his accompanying delegation. The Thai Prime Minister expressed his best wishes for health and happiness of His Royal Highness, and for continued progress and advancement of the people of the Kingdom of Saudi Arabia.
#Afghanistan  #COVID-19  #Covid
Add Comment